Miitopia is two games in one and maybe never-ending 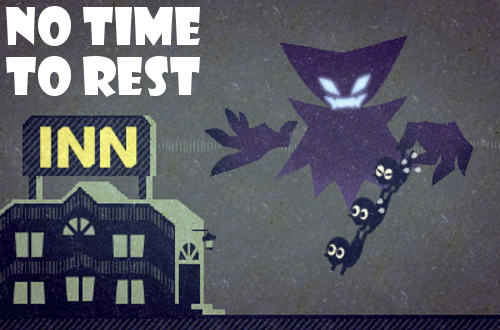 After 25-ish hours of battling monsters, eating food, leveling up, and taking down the Dark Lord Ron Swanson, I assumed I was closing in on Miitopia‘s end credits. Well, you know the dangers of assuming. Turns out that I wasn’t even close, having now poured an extra 20+ hours into the ordeal, because there was still more to do and see, and I’ll keep this mostly spoiler-free and say that someone takes the Dark Lord’s place to continue creating problems for your team of diversified heroes and heroines. That’s fine, really; the weird part though is that the game switches up its pace and flow and feel in a way that makes it seem like an entirely different game halfway through.

For the first, main chunk of my Miitopia time, I was just moving forward across the map, going to where the red exclamation point said to go to, fighting monsters, eating food, and building relationships all along the way. It’s a pretty linear affair. I focused on a few particular party members, upgrading their weapons and armor when able to and generally trying to keep everyone balanced, but eventually one team of four was more leveled up than another. Thankfully, as irritating as it seemed at the time, the game frequently decided to split my current party up, forcing me to use Miis I’d not put as much time into. I’d also occasionally grind out a few areas to ensure I collected every treasure chest and saw where all paths lead, but otherwise it was all steam ahead.

By the time you near taking on the final final boss, the game switches things up, mechanically and even with the UI. You have access to a flying dragon and the Travelers Hub, where Miis will give you specific quests to do. So instead of having a singular goal to follow, you suddenly now have multiple paths to go down, with room to grind and explore. Also, something to touch upon, but you can totally exploit the game tickets situation to your benefit. Here’s how–wait until you get a good roulette wheel with a large slice dedicated to a high-level weapon, then keep spinning, landing on the weapon, and selling it for lots of gold. I was able to make about 50,000 gold after just a few spins, which let me buy a ton of solid gear for my team.

Initially, I was heavily put off by Miitopia‘s combat system, which basically only lets you control the actions of your avatar. However, as time went on, I got used to many of the battles being on auto-run, and the introduction and upgrading of HP bananas, MP candy, and various sprinkle shakers did let me have some control in how the fights went. It was more interactive than I initially assumed, so shame on me, and now I’m curious to maybe go back and see if Final Fantasy: The 4 Heroes of Light is as bad as I’ve built it up to be in my mind. The fights never got too tough or insurmountable, up to the final boss fight, which, as I suspected, required everyone you had collected in your posse at that point to bring the heat, and several peeps were underleveled and needed to be grinded up a bit. Not grinded up into bits. Pay attention now.

I’m usually really bad at keeping up with post-game content. Like, for Ever Oasis, I thought I’d love to continue bringing in people to my oasis, leveling up shops, and diving deeper into randomly-generated dungeons for valuable rewards…but I haven’t gone back to it once since I got Miitopia. The same sort of thing happened with Dragon Quest IX: Sentinels of the Starry Skies, despite my logged hours count saying otherwise. Chrono Trigger also has a New Game+ mode after you put Lavos in its ugly alien parasite place, with even more endings and an exclusive Dimensional Vortex section only found in the Nintendo DS version, which, if you’ll remember, I both loved and disliked. All of that is to say–Miitopia‘s post-game content is great and keeps me coming back to it on a daily basis.

Quest-givers continuously show up in the Travelers Hub zone to demand you do something for them, usually deliver a gift to a friend in another area or defeat a tough monster, all of which offer great rewards for completing, such as rare foods, game tickets, or better gear. Also, there’s two brand new islands to explore, two additional character classes to unlock, and the ability to make dozens upon dozens more team members, if you want. For me, since my main character originally started out as a thief, then became an imp, and finished as a mad scientist, I never got to see many of the outfits and weapons for those first two classes, so I made Jennifer Aniston as my thief and haven’t decided yet on the imp, but someone‘s coming. The real draw for me continuing to play Miitopia is seeing all its content, because the weapons and armor are creative and fun, the music is astounding, and there’s plenty of strange food to eat and kooky monsters to battle still to go. Oh, and there are 250+ Achievement-like medals to earn, of which I’ve done only 50% so far.

I knew I was going to like Miitopia‘s style and tone long before the game came out, but was worried that its somewhat hands-off gameplay was not going to keep me engaged. I’m happy to have my initial reluctance turned completely on its head, with Nintendo’s pleasant, quirky turn-based RPG about people losing their faces resulting in one of my favorite releases in 2017.