Psychological horror Layers of Fear is surprisingly one note 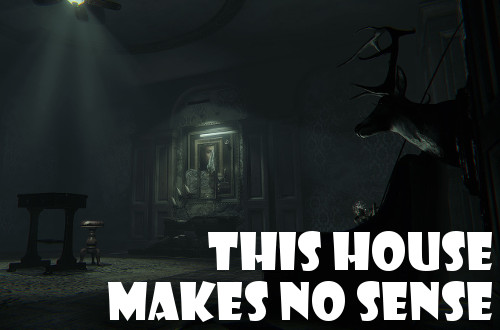 Well, here it is, my requisite playthrough of a single super scary game for 2017–Layers of Fear. Actually, that’s not true. Earlier this year, I ran at full speed through the darkness with a video camera quickly losing battery life in Outlast. I also played a less effective thing called Blameless. Still, I can usually only do one of these every year because they stress me out like nothing else. Actually, this is all a lie, as I can’t seem to find any proof I played something similar last year, though 2015 saw me tackling the Cordyceps fungus in The Last of Us, which I totally consider a horror game, thank you very much, and 2014 was all about the Deep Sleep point-and-click series and The Swapper. Whatever, man. It’s not like I’m on trial here.

Let’s see. Layers of Fear is about art, specifically a painter who has returned to his studio to complete his masterpiece. It’s up to you to figure out how this task should be accomplished. Gameplay involves exploring an old, spooky house, searching for visual clues and memory-jarring items, while solving a puzzle or two to keep things moving forward. Or backwards. Inwards and outwards and downwards–it’s messy. At first, the house appears to be pretty normal, Victorian-esque, but you’ll quickly learn that there are no rules here, and anything and everything can change in an instance. For example, you open a door, walk down a hallway, spin around to find the door behind you gone, and spin around again once more to find a wall now where the hallway was–this is what Layers of Fear revels in, pulling the rug out from under your feet, and it does it quietly, effectively. It reminded me a lot of the way Oxenfree played with its scenarios, remixing them on the fly.

The prominent challenge comes from environmental puzzles which require the player to search the immediate area for visual clues or things to interact with, such as paintings to stare at or candles to light. There are a few locks too that require a specific code to open, but the answers are generally in the immediate area. Layers of Fear is divided into six chapters and extremely dark–not just in tone, but in lighting. At one point, I got stuck in an area of dense in blacks and charcoals that I had to turn the brightness up to figure out where I was looking. Along the way, you’ll find articles or scraps of paper to read, as well as notes from…rats to collect. As you gather up these items, the origins of your masterpiece and methods will slowly be revealed.

As a horror game though, Layers of Fear is jump scare after jump scare after jump scare. It is exhausting, and maybe for some players, this is what they want from an experience, but I prefer milder scare tactics and more emphasis on emotional distress and haunting images. We don’t get that here, except for a painting of a man-baby with fur on his face. Due to its nonlinear storytelling, it is difficult to be truly horrified before knowing what was at stake other than this mad artist’s goal to finish the job, and I found myself bracing for each jump after figuring out, kind of, where and when they might happen. There’s also a reliance on age-old tropes, such as baby dolls and rocking chairs and a bathtub full of blood. The variety of paintings hung throughout the house at least made each room and hallway stand out, and the effect when they’d melt was eerily pleasing.

Perhaps the aspect I liked most about Layers of Fear is how the player opens doors, cabinets, and drawers. I know, weird, but after dealing with angry ghosts, distorted hallways, and rotten fruit, this is what I’m taking away as a highlight. See, when an item is interactive, a hand icon appears, and you press the right trigger down and hold it; then you use the analog stick to perform the necessary action for the desired results. For instance, if you want to open a drawer towards you, hold down RT and pull the analog stick down. Some doors swing away from you, which means pushing up on the stick. It’s an effective way of making you feel like you are there, performing the action, because you open the door at your own speed.

Well, that might be the last horror game I touch in 2017. Oh well. Sorry, Silent Hill 3, I will continue to ignore you. I’m sure I can find others in my Steam library too to also not play. I’m really good at not playing horror games, and yet the curiosity about them remains within me, bubbling just below the surface. So long as they are not jump scare marathons, I can probably enjoy a few. But for now, it’s back to less spooky things, such as Middle-earth: Shadow of Mordor, Slime Rancher, and the ultra bubbly, goofy Miitopia.