My Laptop Hates These Games – November 2017

Well, I suspected this was coming, but my laptop is currently knocking on death’s door. Which totally makes sense, seeing how out-of-date it is and old in technology years and running Windows 10 with all its little might despite being designed to probably never do so. Anyways, I’ve been slowly backing files up and using an even older, less technologically advanced laptop in the meantime, one which sees a lot of error message pop-ups upon booting to the desktop and also doesn’t like to play many games built in Unity. Granted, it can play some things, like Samorost 3 and Mythic Wonders: The Philosopher’s Stone and others, but not everything. So at least this brand new feature of mine can continue marching forward because there’s always a laptop out there, hating on games.

Actually, no. This may or may not be the last edition of My Laptop Hates These Games, as I’m getting a shiny new laptop soon. In fact, it might have even arrived by the time this post goes up. Now, I went with one that was more focused on running my drawing tablet and art programs than playing big AAA games, as I’ll save those grandiose experiences for the consoles. Still, we’ll see if it is able to run the miscellaneous indie thing here and there. Stay tuned regardless to see if this feature runs once more at the end of December.

Onward though to the few games I tried to play this month, but was unable to…

Idle Champions of the Forgotten Realms

I’ve become less enamored with clickers as time goes on, and they really need to do something to hold my attention or come at the concept of an idle game from a new perspective. Like Plantera, which asks you to be more involved in the going-ons of your growing garden. I don’t know if Idle Champions of the Forgotten Realms, an official Dungeons & Dragons idle clicker game, does any of that, as the game simply refuses to run. According to its description, this freebie challenges players to assemble a party of champions and master the art of formation strategy. I assume there’s some clicking involved.

When I tried to launch Over the Moonlight, I immediately got an error message that says the game I’m trying to run requires a 64bit version of Windows. Huh. It also then provided a link to some information about acquiring a refund, but I’m pretty sure this was a free download on the Steam store and so no biggie though it seemed like a neat and calm walking simulator through a purple-and-yellow landscape at night. 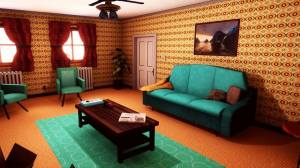 I Am Here, not to be mixed up with I’m Still Here which I played earlier this year, was a big download, which turned into a big letdown after not getting it to run after all that effort. Also, it’s a narrative driven exploration game focusing on mental health and social change, something not touched on enough in games of all shapes and sizes. According to its description, you play as Karen, a successful writer in her earlier days, as she searches for her missing partner. To do this, you’ll explore your surroundings to experience memories of her past and discover the struggles Karen and her partner faced as a gay couple in the 1960s. I might try to revisit this on my forthcoming newer laptop because the subject matter and look of the game call out to me greatly.

Forever Space from Pinhead Games looks like a somewhat traditional point-and-click adventure game with a definitely unique style to it. There’s cartoony mixed with 3D environments. Greg Winston and four other crew mates begin a volunteer work program on Space Station Capricorn, but it doesn’t take long before they notice something isn’t right and the station’s Overseers become difficult to find. This evidently results in the crew becoming suspicious of one another. The plot sounds intriguing, and I love me an adventure game set not on the planet Earth, but this refused to run, though I was able to listen to some of its audio against a black screen before uninstalling the whole thing. Guess we’ll never know if it was more than paranoia.

My Laptop Hates These Games takes a quick look at the titles that kind of, only sort of run or don’t run at all on my ASUS laptop. Here’s hoping that some of these, specifically the ones that looked interesting, come to console down the road. Y’know, those gaming machines where nothing ever goes wrong and every game runs perfectly without ever crashing or freezing or glitching out. Maybe I’ll play these there or in 2056 when I get a new laptop that is, even at that point, still somewhat obsolete.