Grammar is not Suikoden’s greatest joy in life 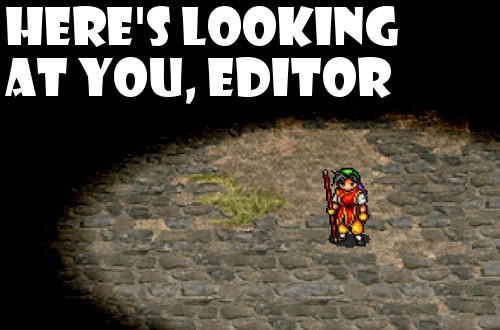 During my recent replaying time with Suikoden, I noticed that the translation work, well…it needed some work. Meaning that there were a constant number of grammar and punctuation mistakes across my logged twenty-two hours of grinding and recruiting, enough that I eventually began snapping crappy photos via my cell phone–when I could. For documentation’s sake, of course. I mean, it might be another ten-plus years before I touch this RPG again, and maybe the world won’t even care a lick about good grammar by then–the horror!

I’d love to tell you that I noticed all of these errors back when I was a freckly, green-haired teenager with ska patches covering my backpack, but that probably wouldn’t be true. I don’t think my editing skills really blossomed until college, until I was told to stop pursuing art. Nonetheless, the spelling mistakes and grammar errors don’t detract one bit from Suikoden‘s fun gameplay, then and now; they’re just easier to spot in 2014 when playing on a larger TV screen, and once you spy one, you’ll be constantly looking for more.

Anyways, below are only four examples, but trust me when I say there were many others that I accidentally button-pressed through too fast or the text on the screen disappeared before I could ready my phone. This was especially the case during the final montage before the credits, where every single 108 Star of Destiny you recruited before the final battle with Barbarossa gets a tiny sentence about what they did after the war was over. Unfortunately, these little blips of text don’t stay on the screen for very long, so you’ll just have to take my word for it. Or, y’know, you could play Suikoden all the way through. Or just watch here. The most common problem I spotted was subject-verb agreement, such as “Become the Commander-in-Chief and protect the border” for Kasim and “Embark on a journey to improve his imperfect self” for Pahn. They also end up spelling Barbarossa as Barbarosa on several accounts.

Right. Check these goofs out: