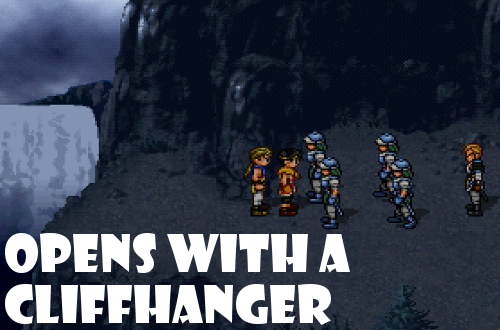 I like juggling multiple games at once, and so for the moment, here’s everything I’m tossing in a circular motion over my head: Dead Island, Diablo III, Harvest Moon: Back to Nature, The Swapper, and Disney Magical World. Someone off to my side just threw Suikoden II in with the bunch, but it’s okay; I’m a decent juggler. Here’s the real dirt–I first learned to juggle with baseballs because I was generally lousy at team sports and often asked to sit the bench for Little League, and it was one way to entertain myself. Hey, at least I was improving a skill, though not one that my coaches intended.

Anyways, Suikoden II. It was this or moving right on to Metal Gear Solid 3: Snake Eater, but I think I need a wee bit more breathing room from Hideo Kojima’s zany nanomachine-influenced mindfuckery for the time being, though I am still intent on playing the remainder of that series before 2014 comes to a close. So long as I can stay one game ahead of Dan and Drew over at Giant Bomb, I’m good. Granted, I also had ambitions about playing a horror game for this glorious month of October, namely Silent Hill 3–yes, another Konami game–but that might not happen given that I’m simultaneously juggling a bunch of comic projects (like Inktober, hint hint).

If you’ll recall, I found replaying Suikoden for the first time in many years to be…an experience. Sometimes an odd one, sometimes a mechanical one, sometimes a repetitive one, but in the end, an enjoyable one. It turned out to be a rather short RPG too in the grand scheme of things, but given that I’ve now sunk just under seven hours into Suikoden II and haven’t even gotten a castle headquarters yet, the sequel is looking to be a much longer, more thorough journey. Let’s get into it.

A real quick summary of the plot goes like this: Suikoden II begins with Riou–who I naturally renamed as Hodor–and his childhood friend Jowy Atreides working together in the youth division of the Highland Army. One night, unexpectedly, Luca Blight, the prince of Highland, orchestrates the slaughter of their unit, blaming it on the neighboring city-state of Jowston. This gives the madman justification for invading Jowston and snowballing a, more or less, civil war. Luckily, Hodor and Jowy escape, eventually making friends with those caught on the other side of battle.

First off, this is a very serious story. Cue ultra and dramatic soundtrack. There are teeny tiny splinters of humor in the game, but so far, they are only with Flik and Viktor and their festering bromance with one another. Otherwise, it’s all about politics and really evil people doing really evil things to innocent villagers; yes, Luca Blight, I’m looking directly at you for that “act like a pig” scene. The game does a great job of making you feel like you really did get swept into the middle of all this, but also prompts you, or rather Hodor, to be the hero destiny foretells. I still wish he wasn’t a mostly mute protagonist, but alas, that’s just how these games roll.

Structurally and gameplay-wise, not much sets Suikoden II apart from its predecessor, though it clearly looks a whole lot nicer. Battles remain turn-based, you still do one-on-one duels, and the large-scale army fights are still there, though tweaked to be more RTS than rock, paper, scissors. The cast is much grander right from the start, and I love that Suikoden‘s Flik and Viktor make a return here, playing extremely vital roles in guiding Hodor and his friends safely through war and strife. I’m curious to see if anything is different with upgrading your castle besides that cooking mini-game; honestly, I don’t even remember how you get your castle, so here’s looking forward to that surprise.

Stray observations, a format I’m totally stealing from The AV Club for the time being:

For the reasons I’ve stated above at the start of this post, I’m playing Suikoden II slower and in much shorter chunks. Granted, that might all change once Hodor gets his castle headquarters and can begin bringing in a swarm of friends and allies, but for now, I’m okay with the pace. After all, there’s a lot more heavy moments to take in here, and no matter how many times Nanami told Hodor he didn’t have to wait with her for Jowy’s return, I’ve got all the patience in the world. You can’t rush through the good times.