There’s some cold, quiet body interchanging in The Swapper 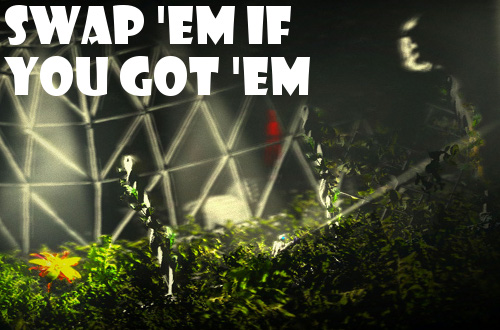 Well, back in February of this year, I tossed a few bucks at Humble Indie Bundle 11 and got the following puppy-eyed indie dogs back to play with:

Naturally, I’ve only really played half of these. Granted, I already played and beat Fez back when it debuted on the Xbox 360, so my digital copy will most likely continue to collect e-dust for a good while unless I get a hankering for some world-rotating fun. I also ended up getting free copies of Dust: An Elysian Tail and Monaco for being a Gold member, so I won’t really be getting much use out of these Steam editions. Really, the only game from this list that I played freshly and fully is Guacamelee!, and I do intend to pop back to it eventually, as its Metroidvania map is still littered with secrets to unearth.

Of the remaining names, I’ve been most interested in seeing what The Swapper is all about. While it and Antichamber are both puzzle games, one is more intimidating than the other, and I’ll let you figure out which is which. Psst: it’s the one that deals with colors and walking backwards.

The Swapper‘s got a great, Golden Age sci-fi plot, the kind that makes me want to fish out my many Asimov books and pore through them all over again: having exhausted their natural resources, humanity establishes seven remote outposts in distant space to extract and synthesize useful materials from nearby planets. The crews for these space stations must survive independently of Earth for several decades as they work. Unfortunately, Station 7 loses orbit and disintegrates into its closest sun, and then Station 6 mysteriously goes offline. The crew of Theseus begin to explore an uninhabitable desert planet and find that it is abundant with natural mineral deposits called Chori V. However, they also discover an alien lifeform similar to Earth’s silkworm and highly complex rock formations of unknown origin that seem to possess rudimentary intelligence.

The majority of the story is told visually and through terminal logs, though I have run into another living, speaking crew member, distraught as she may be. Oh, and rocks talk to me telepathically. But really, it’s all about the visuals. Which are, to put it straight, simply stunning. The 2D visuals are created from photographed clay models, which gives everything a diorama-like look, and every room you enter tells a story, whether it is the lush, vibrant plants still thriving in the greenhouse or the somber, abandoned rec rooms. Lighting plays an important part; your character’s Swapper gun is equipped with a flashlight, which is really only a sliver of light, but it adds to the atmosphere wonderfully. The levels themselves are gorgeously lit or sometimes dark on purpose for effect. It’s got the same sobering sadness found early on in Super Metroid or when you later get to the powered down section.

To progress in The Swapper, you have to collect orbs, as some doors or places on the Metroidvania-esque map require you to have X number of them first to get past. You find these orbs as rewards to puzzle rooms, and sometimes you get one orb, another time you get three, and occasionally you’ll rack up a large sum all at once. The puzzles revolve around you using the Swapper, which creates clones; you can make up to four other copies of yourself, and so long as the path is clear, swap places with any of them. At first, the puzzles are fairly elementary, but they quickly ramp up in difficulty, often asking you to balance timing and the specific placement of each clone, as well as dealing with moveable crates or Swapper-nullifying bursts of light. You’ll also end up murdering many, many clones of yourself, all for the sake of progress. I’m proud to say I’ve not had to look up outside help…yet.

If I had The Swapper‘s story spoiled for me during some of Giant Bomb‘s GOTY talks last year, I’ve quickly forgotten whatever they said. Sure, I suspect there’s going to be some kind of twist related to your ability to create disposable duplicates of yourself, and those mind-talking rocks are surely up to no good, but either way–I’m glad I don’t remember what is going to happen. It makes both the future puzzles and story beats all more desirable, rewarding. I don’t know how much further I have to go, but here’s to more orbs, obtuse terminal logs from Sam Cook (not to be confused with Sam Cooke), and watching my body crumble into itself after missing a timely swap as gravity took over and floor quickly met feet.