The time to chat up every NPC in EarthBound has arrived 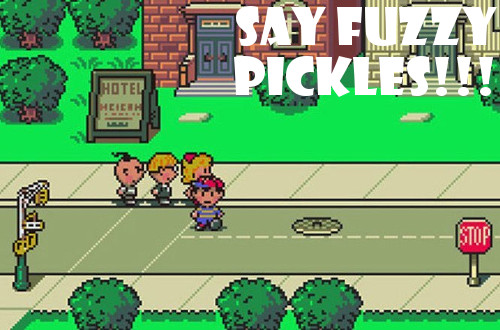 We are finally here, and by we I of course mean just me, but here it is: it’s 2019, and I’m playing EarthBound for the very first time. Y’all might remember me getting a digital copy of this game for the Wii U back in, oh, May 2015. Well, now that I plan to get a Nintendo Switch and put my Wii U away into storage, I’m forcing myself to see as many of the games I have on it before the inevitable takes hold and all I do with my free time is play whatever this new Animal Crossing is going to be. Until then, uh…fuzzy pickles? Yeah, fuzzy pickles!

I’m sure I’m just rehashing what everyone else out there already knows and has known for years upon years, or at least 1995, but here we go. EarthBound takes place about a decade after the events of Mother, in the fictional country of Eagleland, which doesn’t mean a whole lot to me seeing as I haven’t played anything else in this legendary series. You start off as a young boy named Ness–get it?–as he investigates a nearby meteorite crash with his neighbor, Pokey, to find his brother, appropriately named Picky. There, they stumble upon an alien life-force known as Giygas, which has enveloped and consumed the world in hatred and, consequently, turned animals, humans, and mundane objects into malicious creatures. However, Buzz-Buzz, a small, bee-like creature from the future, instructs Ness to collect melodies in a Sound Stone to preemptively stop Giygas, and so the grand adventure begins.

Well, when I say begin, I really mean…wander around Onett for hours on my own quest to talk to every single person and try to go through every single door before moving forward with the plot. There are a ton of NPCs, and many of them offer good advice or tips, and some just say really strange things to Ness or provoke him into a battle. I think at one point someone, or something, tasked me with answering a specific Beatles-related trivia question (FYI, the answer was “Yesterday”). It’s all a little strange, and the strangeness is strange because, looking at EarthBound, it appears to not be your typical JRPG. For one thing, it is set in a somewhat modern-looking time period, with drug stores, burger joints, and town halls to explore instead of fantasy-like villages and mountain caves as seen in games like Illusion of Gaia and Secret of Mana at the time.

I’m also doing a bit of grinding, both in terms of combat and getting money from my phone-father deposited into my bank account. Since Ness is by himself at the start, some enemies, mainly the Sharks when they double or triple team him, can be too much to handle. So I’m fighting dogs, crows, and snakes on repeat, but Ness is now around level 8 and has better gear, which means he takes less damage. Also, when battling against truly weaker enemies, combat is handled automatically without having to go into the whole transition thing, which is nice; I liked it in Dragon Quest IX: Sentinels of the Starry Skies where enemies ran away from you, and I like it a lot here too. It means less mashin’.

Let’s talk about the combat in EarthBound, which is turn-based and does not feature random encounters. Ya-hoo. You see the enemies on screen and can try to approach them from behind for a potential bonus attack, or, if they get the jump on you, they get first dibs on moving. In combat, characters and enemies possess a certain amount of HP, and attacks to an enemy obviously reduce their HP. Once an enemy’s HP reaches zero, it is defeated…or, to use the game’s language, tamed. Sometimes you will receive an item after the battle, like a Cookie. As far as I know, you only control what Ness does, but maybe that will change once I get more peeps in the party.

So far, since I only really have Ness in my party, the battles are a bit one-note. I simply spam the attack button each turn and occasionally have to stop to eat a HP-refilling item or use a spell, called PSI attacks, which use up your PP. It often feels like luck or the roll of a die when attacking; sometimes you hit, sometimes you miss, and sometimes you land a critical blow, but there’s really no guarantee to what will happen, which can be a little frustrating early on. I did lose in battle to a couple of Sharks, which dropped me back at home with half my money gone; I had tried to “run away” from the fight twice to no avail. Again, it might be all about that luck stat, who knows.

I’m only a couple of hours into EarthBound and still haven’t visited Giant Step. Trust me, I’ll get there. However, I’m sure there is a lot more to see and do before this adventure concludes, but I’m definitely intrigued enough to keep going. There are a couple of things I don’t immediately like, such as a limited amount of inventory space and how expensive sandwiches are, but I can get over that thanks to the game’s colorful aesthetic and bouncy soundtrack that borders on pop and general weirdness. Seriously, the music makes some hard, dramatic swings from wandering around town, to entering shops, to engaging in battles, and it’s all kooky and catchy.

Don’t worry, I’ll be back with more thoughts on EarthBound. Until then, answer me this–can Ness get run over by cars in Onett? I’ve been avoiding them, afraid to find out the truth.