The Mirror Lied is an experiment intentionally too vague 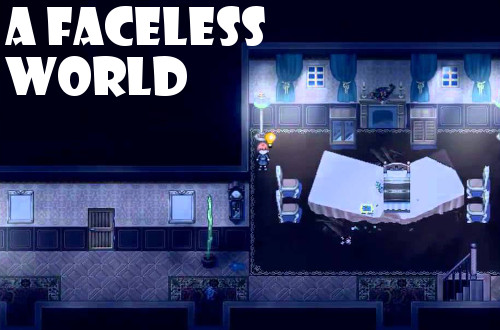 Earlier this year, I finally got with the times and played To the Moon, which I quickly followed up with its holiday mini-episode. I ate both up quickly, excitedly, and then immediately went to Freebird Games’ website to see if there was anything else to play. Turns out, yes, seeing as I had a copy of The Mirror Lied in my videogames folder for some months now. I’m guessing I never grabbed a copy of Quintessence: The Blighted Venom because I saw that it was incomplete and currently on hiatus. Too bad. Regardless, I finally got around to playing The Mirror Lied a few nights ago, and I have no idea what went down by the time credits rolled, which seems intentional, if not entirely successful.

I’m going to now give you my interpretation of The Mirror Lied‘s plot, but this could be entirely wrong. You play as Leah, a young, faceless girl living in a house all by herself. She has a friend–a bird called Birdy. Somebody keeps calling her house’s landline, telling her what to do, when all she really cares about is watering her plants, choosing the right dress to wear, and exploring the house for secrets. Eventually, she’ll escape, to the roof. Or maybe it’s all a metaphor for depression slash nuclear war slash coming of age slash menstruation. Really, I’ve got no idea, so tell me your take below in the comments.

Similar to To the Moon, this is an adventure game, where you explore your surroundings, gather items, and advance the plot. One strange mechanic here though is that you have a limited amount of time to reach the ringing phone, which makes sense from a logic standpoint, but gameplay-wise it’s just annoying. I’d be watering the magically growing plant only to suddenly learn I had five seconds to get to the phone; figuring out how to trigger the ringing a second time after missing it was hit or miss, with me forcing Leah to wander aimlessly until it happened again. It might have seemed neat on paper, but not in function. There’s also a single scenario where you have to use the inventory menu to load an empty gun full of bullets, which was clunky. Otherwise, just have Leah walk up to stuff, examine the items, and move on.

Interpretation certainly has its place in art, such as with the ending to LOST or that couple of dressed up lovers in The Shining who are clearly into some raunchy things, and videogames occasionally let you determine for yourself what you just went through. The Stanley Parable, despite having a narrator tell you every little detail, leaves plenty of room for your own take on events. Superbrothers: Sword & Sworcery EP says a lot through very little. I still occasionally ponder what LIMBO was trying to get across years later.

However, here, in The Mirror Lied, it all felt like an exercise in simply trying out mechanics and puzzles–nothing more, nothing less. A half-hearted attempt at a narrative to connect everything was provided with Leah, Birdy, and the phone calls, but the rest is left on the back-burner, because it doesn’t matter if you understand what is happening by the end, only that you got there, by figuring out how to unlock drawers, access a computer’s email network, and fill up a bucket with reddish liquid to water your ladder to freedom.

The Mirror Lied‘s developer Kan Gao stresses that it is not a horror game, that nothing will jump out at you. Can’t argue with that.