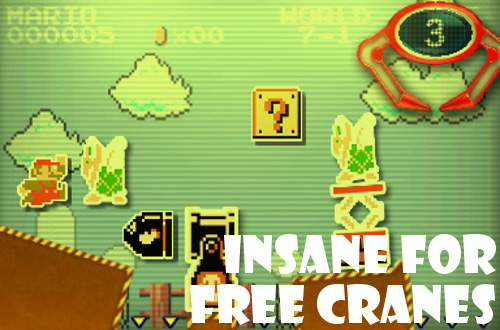 Growing up near both the Atlantic City boardwalk and Ocean City boardwalk, I’ve seen my fair share of crane games. If you don’t know what they are, they are this: vending machines that consist of prizes, usually plush toys or alternatives, which can be acquired by steering a claw crane over them, lowering to grab hold, and then, if you were lucky enough to capture something, dropping it down a chute so that you can rub it against your childish face with glee. Anyways, while I’ve seen a bunch, I’ve played very few, often because, even at a young age, I knew they were a gamble, one slanted a little far to the unfair side of things.

Thankfully, things are monetarily safer with Nintendo Badge Arcade. In fact, the game’s nameless bunny host, who I’ll talk more about in a bit, repeatedly informs you that you don’t have to actually spend real-life cash to play, that there are other ways to earn free plays at the themed crane machines. One almost gets the sense that both this bunny and Nintendo are just as hesitant as–and I’m theorizing here–the player is about paying $1.00 for five chances at moving a crane to the left and then down. Either way, your rewards are badges, though some appear to have sharp tips on the back, making me think of them more as pins than anything else.

What can you do with these prizes, you ask? Not much. They are collectibles, and you can then decorate your home menu with them on the Nintendo 3DS. I layered an 8-bit Mario sprite badge on top of the folder that contains all my Mario games, as well as did the same for my Legend of Zelda titles by using a blue octorok–here’s hoping I get something a bit more iconic down the road–but you can also place the badges anywhere in the menu to create cute or inventive scenarios and such. I’m not ready for that. You can also purchase matching themes to work cooperatively with a set of badges. I’m mostly into the badges that can replace certain applications, but still function as activating them; for example, I now have a Yoshi-themed badge to launch into my library stats thing. I want more of them.

Nintendo Badge Arcade‘s claw crane mechanic works as you expect it to. Simply press and hold a button to begin moving it over to the left and release when you want it to stop and lower. If you did it right, then sit back and watch as the claw does the rest. If you done goofed, then my sympathy. I did play one machine that featured a hammer instead of a claw, and the hammer swings forward, hitting everything in its path towards the chute. I got like three or four more badges on this machine.

By far, the most appealing thing about this free-to-play app is its host, which is a charismatic and energetic pink bunny. Who cuts through the cheddar and speaks as plain as possible about what this program is and how you do not have to spend any money on it…though it would help keep the lights on and bills paid if you do. This bunny will randomly change into costumes and other things, as well as promote a Nintendo game in a surprisingly candid and conversationally manner. Heck, I actually felt a slight ping of interest in The Legend of Zelda: Tri Force Heroes after speaking with Badge Business Bunny–that’s what I’m going to call him–for a minute or two. Maybe I’m just a sucker for trivia.

I expect to not drop a single ounce of real-life money on Nintendo Badge Arcade, but do see myself checking in every night alongside Pokemon Shuffle as my once-per-day go at progress. The practice claw machine may or may not provide me with free plays, but it’s worth a shot and won’t take very long. I’m definitely interested in more of the app replacement badges, as well as all things related to Animal Crossing: New Leaf. Perhaps I can have Sylvia back in my life after all.