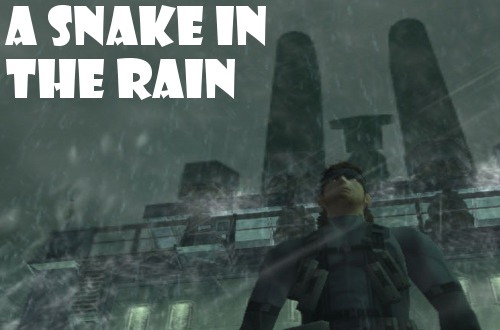 Well, with Suikoden done, I’m moving on to my next target for 2014, which is coincidentally another Konami title–replaying Metal Gear Solid 2: Sons of Liberty. You might’ve assumed I’d go right into Suikoden II, but there is a wee time-crunch hanging over my head. See, Dan Ryckert and Drew Scanlon are playing through the original Metal Gear Solid over at Giant Bomb, with hints that they’ll be tackling more tactical espionage action titles in the series afterwards. And they’re moving forward swiftly. Personally, I’d love to watch them replay Solid Snake’s first outing on the PlayStation 2 after I get to re-experience it myself. Call me selfish, but I don’t want my replay to be tainted by their actions or thoughts in any way whatsoever. Thus, I loaded up Metal Gear Solid 2 the other night via my disc copy of Metal Gear Solid: The Legacy Collection 1987 – 2012.

To open, it didn’t go well, and I’m going to call my first hour or so with the game a complete wash. I didn’t even bother saving it once, knowing I’d like to try again and not immediately goof up and get spotted every few steps. I’m not sure exactly where everything went wrong, but the controls are a huge change from the–well, what now seems rudimentary–controls from Metal Gear Solid. The biggest addition is a useful first-person POV, one where you can aim your gun in and strafe. Before, you merely used it to look around the environment, but this new angle becomes vital when using the M9 tranquilizer gun because guards will fall asleep faster based on where you hit them with darts (go for the heads, Snake, not the knees). However, every time I went to use it, I kept trying to hit the Triangle button instead of the now used R1 button, causing Snake to stand still out in the open a few seconds longer than I’d like. I also found it harder to stick to surfaces using the analog stick, with Snake often slipping off cover and getting spotted. Ugh.

Wait, wait, wait. I guess I should actually try to some up the story before getting into the trials and triumphs of my replay. Metal Gear Solid 2 opens with a flashback in 2007, two years after the Shadow Moses incident that went down in the original Metal Gear Solid. Solid Snake and Otacon, now members of the non-governmental organization Philanthropy, are investigating the development of a new Metal Gear by American marines. To do this, Snake sneaks on to the tanker transporting the weapon and must produce legitimate pictures of it.

Of course, as many fans of the series already knows, this was a bait and switch tactic by Konami, and the tanker section is only a prologue, with the main meat of the game starring FOXHOUND’s newest recruit Raiden two years later. His objectives are to infiltrate the Big Shell clean-up facility to rescue hostages, including the U.S. president, from the terrorist group Sons of Liberty. This terrorist group is purported to be lead by Solid Snake and backed up by Dead Cell, a rogue anti-terror training unit. They are also threatening to destroy the facility they have seized.

So, I had trouble on the tanker. I played for an hour, got spotted a lot, tried to fight my way out of alert mode, died, and so on. At one point, because I didn’t remember how hanging worked, I dropped Snake right into the cold, unrelenting mistress known as the ocean. Thinking back to my VR days, I decided to try a few training sessions out and see if they helped any. Once I felt ready, I went back in to Metal Gear Solid 2 with the following repeating loudly and clearly in my mind: getting caught is not the end. See, games like Deus Ex: Human Revolution and Mark of the Ninja really pushed for non-lethal playthroughs, the perfect kind, where you don’t even get spotted once. Well, that seems really hard and also not fun, so I’m not going to worry too much if things go awry rather fast because I darted by some guard’s vision cone too soon. Plus, I’ve found it is easier to simply let Raiden die than try to take out five or six guards or, even more impossible, hide from them; the game does a good job of auto-saving when you enter a new area.

Metal Gear Solid and its earlier brethren spoiled me by providing the radar from the get-go. Here, you have to first find a terminal and download a radar for each new area, which means when you first arrive somewhere, you can only see what you can see, and have to use the AP sensor as much as possible. This makes each new area tougher to initially run through, but also more exciting. There’s some strange new items, like pornographic magazines and coolant sprays, to use, and I am still horrible at holding up soldiers and getting them to shake dog tags free. Well, that’s only partially true; I can consistently sneak up behind a guard and get them to freeze, but then trying to reposition Raiden to take advantage of this always leads to mayhem.

If there is one thing I forgot about Metal Gear Solid 2, it’s that its color scheme, specifically once you get to Big Shell, is phenomenal. I know teal and orange is a bit overdone, but maybe it is used over and over for a reason–it works. I love traveling from one strut to another and being outside on the bridges with the sea gulls and blue sky. The music is intense and stirring, and while there is the occasional bit of still awkward and robotic dialogue (ironically from the Colonel), the voice acting still draws you in despite the ridiculous characters and situations. I particularly like the Rosemary and Jack stuff, which I somehow forgot entirely since I last played this back in college.

Right now, I’ve infiltrated Raiden’s way into Shell 1’s core by wearing an enemy’s disguise and carrying an assault rifle. Now I need to figure out how to work around a retinal scan in hopes of learning the location of the captured U.S. president from a man or woman named Ames, who apparently has a pacemaker. I’m really looking forward to seeing how the rest of this zany plot unravels as I really only remember the most zany moments–naked cartwheels–and not the quiet stuff, like Fortune’s affection for Vamp and the silly detail of Fatman drinking a fruity drink before starting the boss fight.