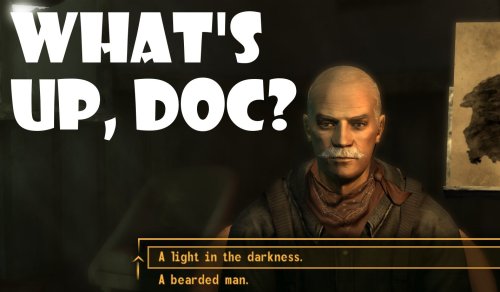 Doc Mitchell is the very first in-game character you’ll meet in Fallout: New Vegas. He’s the surgeon in the small town of Goodsprings, as well as possibly a former vault dweller from years past. His main role is to help you, the Courier, with the character creation process, and he does this in a number of ways. First, he asks you for your name, which I told him was Jareth; he did not seem too impressed with this choice. Next he asks you to examine the Vit-O-Matic Vigor-Tester, which is how you assign your S.P.E.C.I.A.L. points. Lastly, he runs you through a word association quiz and some Rorschach tests to determine which three skills to tag you with. This system works much better than it did in Fallout 3, streamlining the process and just chugging along at a better clip.

Before you leave the doctor’s house, Mitchell will give you some items: a Pip-Boy 3000, pistol, and  a jumpsuit from Vault 21 (thus the reason I suspect he once lived in a vault for a bit). You can also find a number of items in his house. I found some ammo, a doctor’s bag, and miscellaneou junk that was ripe for selling. If you need to heal up or cure some radiation poisoning and want to pay a lot of caps for it (100 and 50, respectively), he’s the man to see, but I know there’s cheaper options available. Just go drink out of the rad-free toilet in his bathroom a couple dozen times.

Doc Mitchell is voiced by Michael Hogan who is most notably known as everyone’s favorite one-eyed XO Colonel Saul Tigh from frakkin’ Battlestar Galactica. He’s not as rough-sounding in Fallout: New Vegas, and definitely slows down his words a bit, as if he has all the time in the world to tell you what you need to hear. Also, I love that Tigh and Mitchell even look very much alike: 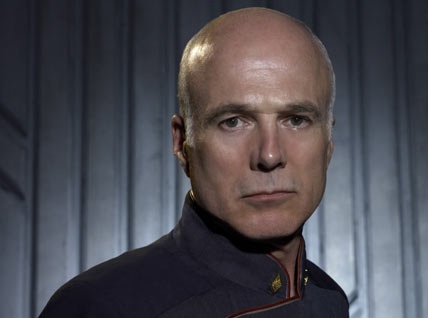 Just throw a cowboy mustache on him and we’re good to go!

Currently, I’m gearing up to convince the doctor to help me in aiding the town against some nasty gang of escaped prisoners. I’m looking forward to seeing his role expand over time, but I suspect he might just be a one-shot deal, there only to help the Courier get started and nothing more. Time will tell, of course.

Not sure if this whole “oh, the characters you’ll meet in New Vegas” feature will be a thing or not, but I might write a bit more about other characters I meet as I traverse the Mojave Wasteland. Heck, there’s enough interesting folk in Goodsprings alone (come on, Ringo!) for at least four or five more posts…