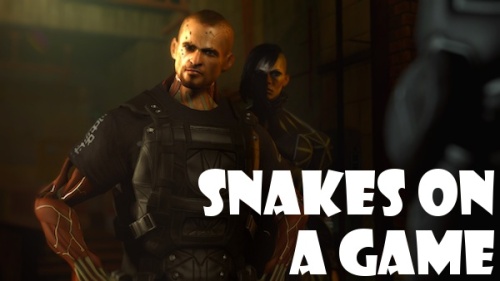 I hated the fight against Lawrence Barrett; I loathed the battle against Yelena Fedorova; and yet, to the surprise of me and all of y’all, I have no rage-inspired emotional response to the third boss battle against Jaron Namir. It was over too fast. I snuck up behind Namir as he was hopping over a wall, triggered the stealth punch button, and…punched his lights out. One hit, ten seconds…boss fight done. I have no idea if this is a glitch or if I’m a gaming god or ultimately if I was doing it wrong–whatever the case, I don’t care. The less time I spend on boss fights in Deus Ex: Human Revolution, the more I like the game.

And here I was, all prepared and ready to spew hate upon hate upon hate over this third boss fight. Nope, not today. However, the game’s not over yet. Jensen still has one last mission to do. You know, save the world and all that. I’m excited to see the credits roll, and I think if you’ve been reading all my rants about this game lately you’ll know why. However, even on a second, shooty playthrough, I’m still going to one-punch Namir to death…unless it is a glitch and gets patched before that chance pops up again.

One-punch Pauly. He only swings once, but he makes it count. POW!

Second boss fight in Deus Ex: Human Revolution is worse than the first

I’ve not been enjoying Deus Ex: Human Revolution as much as I would like; on paper, everything sounds like golden mac and cheese, with plenty of sneaking and interrogating and unraveling and augments, but it turns out that playing it the way I like to play RPG shooters is probably not the best way to play it. Sure, it’s a way, but one easily described as elephantine difficult. I die a lot, I get spotted a lot, and I can’t read a majority of the emails thanks to tiny text syndrome, which means I only hack computers to gain XP for hacking, not for delving deeper in the world’s lore and bad grammar. It’s all a bit of a shame, but I feel this pressure to push on, to finish it, in hopes that I could play it again, this time with a run-and-gun approach, which seems simpler, but ironically safer.

The first boss fight in Deus Ex: Human Revolution nearly had me putting the game’s disc back in the box, the box back on the shelf, and the whole thing out of sight and mind. However, I pushed on, stubborn, and finally got through it. The whole thing was a disappointment, and I knew that more boss fights were to come, but a part of me assumed that maybe they got better, more varied, with some options still for pacifist players. If Yelena Fedorova is any indication, then no–they get worse.

Mute and augmented to the height of 6’7″, Fedorova is one helluva assassin. And if you want answers from Eliza, you need to take her out, which is no easy task. The boss battle takes place in a circular room, with an inner circle and outer circle. The floor is wet, not a detail to dismiss. Along the outer circle ring are four generators, which when destroyed send deadly electric zolts across the floor. If you were not playing the way I am playing, you could shoot Fedorova with guns, stunning her near the generators, and then explode them with more guns or grenades. If you have the right skin augmentation, you can take less damage from the electrified floor, otherwise you have to hop around like a noob on hot coals, praying your health holds up. Here’s the rub: I have no deadly guns and no skin augmentations. As a pacifist player, you have to hang around the generators and wait for Fedorova to charge at you, damaging the generator in the process. You receive damage from this, and then you also have to survive all the electrical damage. It’s tough. I tried numerous times, and the only solution was to switch the difficulty down to easy, which reduced the amount of damage Jensen took from the floor. Three exploded generators later and several popped painkillers, I got this:

During the first part of the game where you spend a lot of time in Detroit on the streets, I went after most of the sidequests before leaving the area and losing the chance to complete them. It’s the RPGer in me, having to finish up all those little mini tasks or at least see what they are about. Now, I skip them all and just want to finish up the main storyline as I’m so disheartened about my first playthrough (especially since I think I screwed myself over on the “don’t kill anyone” Achievement by using robots once) that I just want to see the whole story and then play it again very differently. Stay tuned for grumbling about the next boss fight, which I’m sure to hate.