On bringing King Yama to his knees in Spelunky

Some 350+ deaths later, I did it–I beat King Yama in Spelunky. For those down with the lingo, you’ll understand that this is no easy thing to accomplish and is generally only the result of day after day after day of playing and learning how the game–and most importantly Hell–works. It’s also a result of extreme patience and determination and sticking with things, as each quick and sadistic death of your chosen spelunker is both painful and a lesson to learn.

I’ve gotten to King Yama three times now, dying twice before from stupid mistakes as I was just freaking out about reaching him and not paying attention to the bats above and the lava below. But on the third meeting, patience and power were on my side, as well as the shotgun/jetpack combo, and down he went.

Oh, and did I mention this was done on a Daily Challenge? It was:

Just beat Yama! AND ON THE DAILY TOO. #spelunky #sopleased

For the PlayStation 3 Spelunky leaderboards on that day, at the very moment of beating King Yama, I was ranked in sixth place. I’ve not gone back to see how I’ve moved around since then based on others playing as I don’t want to destroy the magic of, well, being sixth. May the day live on untarnished forever in my mind, and if you ruin any bit of this, may you forever get trapped in Hell 5-3 with no bombs, the Ghost overhead, and a bunch of angry shopkeepers below.

Anyways, now that I’ve beaten Yama, I am feeling very much nearly done with Spelunky. According to the Trophies list, there’s only three more to unlock: beat the game in under 8 minutes with no shortcuts, fill the encyclopedia book thing 100%, and earn 500,000 gold in one run. Two of those seem impossible, though I did come close to that amount of gold after beating Yama; think my total was in the 400,000 range. I’m not sure what is left for the book though, as I’ve gone through the wormhole and secret castle levels, but have still not made it out alive in the alien mothership. Oh, and I just remembered, there’s an item in Hell that makes you invincible to the lava monsters that I’ve never grabbed, mostly due to trying to rush to the exits in Hell for fear of my spelunker’s life who, by the way, has always been the girl with the green bow. She’s just the best, even when I mess up and jump her into a pile of spikes.

I suspect I’ll continue to sporadically participate in Spelunky‘s Daily Challenges, as there’s always at least something to aim for in those runs–as much moolah as possible. But otherwise, with King Yama dead and done, I feel content enough to put Spelunky aside. The game’s been good to me–nay, great to me, providing more value for money than a hundred other downloadable titles could ever imagine. Sure, a lot of that has to do with its randomly generated content, but even learning how the mines, jungle, ice cave, and temple levels work is not enough to make it; you have to know how far you can fall without killing yourself, when to run and when to walk, how to use the shotgun and not get into trouble, when to make a beeline for the exit versus exploring more, and so on. Plus, the journey to King Yama is littered with so many chances for mistakes, such as dying in the Black Market or not getting the scepter from Anubis for the City of Gold. It’s a game of luck and skill, one constantly changing, but never not still relying on those two aspects.

If anyone has any great Spelunky speed-running tips, I’m all ears. Tentative ears, that is, though I’m willing to at least try a few times. I heard that the faster you complete a level, the higher chance you’ll get a “dark” level next, and those are the absolute worst. So, um, no thanks if that’s the case.

You fear to go into those Spelunky mines 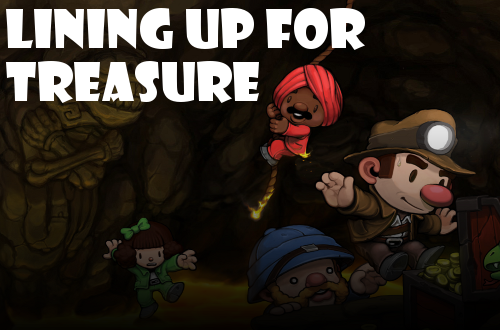 Let’s get real: I’ve only been playing Spelunky for about two weeks and some change now, nearly daily, attempting at least one or two runs. Originally, I had no interest in the game, as it came across as maybe too punishing to be considered fun, and so I always kept my attention elsewhere. But then Patrick at Giant Bomb began playing, streaming his daily attempts to escape the mines, dive deeper down, and get better at the numerous mechanics and tricks, and it was actually quite interesting to watch. Kind of like a horror film, where it’s fine and dandy to watch someone else put themselves into a tough and trying situation, only because it is not you, and you can just kick back and absorb.

What is Spelunky, you ask, not knowing? Well, it’s an indie action-adventure game created by Derek Yu that has you running through caves, collecting treasure, and saving damsels for a high score and an attempt at beating the boss Olmec. It originally started as freeware in 2009, getting remade for consoles and the PC years later. The trick here is that the dungeon levels are randomly generated each and every time, and you only get one shot at it, though there are ways to increase your health and gain a second life. Traps are deadly, enemies are tough and quite unpredictable, and don’t even try stealing the idol in the jungle levels unless you have enough bombs to reach safety.

Some runs in Spelunky last around twenty minutes, and some are over in mere seconds. Like an endless runner á la Temple Run 2 and Jetpack Joyride, the “one more go” mentality is strong here. Very strong. Every death is your fault, and there’s always something to be learned for your next spelunking sojourn. Next time you’ll know that you can’t fall from that specific height, that you can’t jump on the walking Venus fly trap enemies, that bees should just be avoided at all costs, and so on. Visually, the game comes across as quite simple, and that’s even more noticeable when you compare the freeware version with the updated console versions, as not many details change, but things obviously get prettier. That said, this is one of the most complex and strategy-heavy games I’ve played in a long, long time.

I’ve beaten Olmec once. And it happened quite fortuitously. See, there’s this fellow called Tunnel Man who you meet when traveling from one themed group of levels to another. Such as exiting the mines and reaching the jungle. And he can open up shortcuts to these worlds if you give him specific items, like two bombs or a shotgun. However, to open the final shortcut to the temple, you have to bring the gold key you find in the mines all the way with you through the mines, jungle, and ice caves, and it’s no easy thing. Or at least I thought it was going to be grueling. Er, I did it on my first attempt. Even crazier is that after I gave the Tunnel Man his shortcut-opening item I finished the temple levels and got to the final boss, all wide-eyed in wonder and disbelief.

Let’s see. What else can I say about Spelunky? Dat music. Now, you can never really hang around too long in each singular level, as a ghost shows up that can one-hit kill you, so you are trying to move through the world at a speedy–but safe–clip, and that means you’re unfortunately missing out on some fantastic tunes. Everyone will be most familiar with the songs for the mines, and they are moody and down-tempo, with elements taken from jazz and all things 1990s. That jingle that plays when you anger a shopkeeper is both awesome and terrifying. The game’s soundtrack, which you can listen to here, is written and produced by Eirik Suhrke, with some additional friends helping out here and there.

Despite beating Olmec, I’m nowhere near done with Spelunky. Not one lick. First of all, there’s a second secret boss called Yama, and to get to Yama requires a lot of specific steps, and you can’t mess up one of them. It seems tough, but practice makes perfect, and I’m going to at least try. First I have to reach the City of Gold and then Hell. Hmm. But I’m also playing the game on the PlayStation 3, which has Daily Challenges, singular runs where the goal is to get the highest amount of treasure, and leaderboards nicely show how all your friends stack up against you. I’ve recently added a ton of Giant Bomb users to my friends list, which makes this feature much more enticing than when it was just me by my lonesome. And who knows–maybe one day I’ll tackle a solo eggplant run?