Of all the videogame-based alchemy systems, I can confidently say that I like the one in Ni no Kuni: Wrath of the White Witch the least. Which is a shame, as Level-5 generally knows what its doing with its item synthesizing mechanics, a gameplay element that warms me greatly. Seriously, I love it. You take one item, mix it with another, and get something–more often than not–greater than the sum of its parts. My feverish appreciation probably all dates back to mixing herbs together for stronger health potions in Resident Evil 2, but if a game has any kind of alchemy element, I’m in. Heck, I bought Atelier Iris 2: The Azoth of Destiny solely on this reasoning, even though its very name scares the life out of me and I’ve not played it yet.

In Dragon Quest VIII and Dragon Quest IX, you have a magical pot for all your brewing needs. In the former, it travels with you, riding on the princess-drawn carriage with her goblin father. In the latter, it stays put at the Quester’s Rest inn, which you must visit to do your mixing thing. Either way, you put items together and hope for the best, or you can pick up recipes (or clues) along your journey for killer gear. In VIII, you had to wait a bit for the pot to create the item–maybe about ten or fifteen minutes–which made grinding more bearable, as you battled for XP while waiting to hear that salivating ding that indicated your item was done. They took this away for IX, probably because it was on the DS and meant to be played in short, portable bursts, so waiting was not an option.

In Rogue Galaxy, you have two different ways to create new items: Weapon Fusion and the Factory. Basically, all weapons gain XP from battle until they are maxed out, wherein they can then be synthesized along with a similar weapon to create something new. Toady, a strange frog monster, helps with this by swallowing both weapons and spitting out something new; one could argue it is an alchemy pot. However, you don’t really know if something is going to turn out great and just have to chance it, though Toady will also warn you if the results are really negative. For the Factory, it’s more of a puzzle system, where you have to line up machine parts to get it running properly to create a special item from a set of blueprints.

For non-Level-5 joints with alchemy-based systems, it’s a mixed bag, with most alchemy systems fairly uninteresting or just bad altogether.

Odin Sphere has the player combining two items to generate a new item during gameplay, which is then stored in a “Material” bottle. These bottles can be improved as well by alchemizing two of them together to get a material bottle valued at the multiplicative product of the two original bottles (e.g., Material 2 combined with Material 3 results in a Material 6 bottle). It’s a bit complicated, and I don’t even remember getting to it during my first hour with the game, and I’ve not gone back since. I remember more about various plants you grow during battle than the alchemy, which says a lot, I guess.

And then there’s Kingdoms of Amalur: Reckoning, Elder Scrolls V: Skyrim, and Dragon’s Dogma: Dark Arisen, all of which with systems that are nothing more than perfunctory.

However, in Ni no Kuni, the alchemy system is unnecessarily clunky. You have two options once you obtain the alchemy pot and its genie master Al-Khemi in Castaway Cove: use a recipe or mix and match. If you have all the right ingredients, simply click “use a recipe” and Al-Khemi with automatically take care of it for you. For mixing and matching, you are either guessing or looking up the select few recipes available in your Wizard’s Tome, a tedious process that involves you backing out of the alchemy menu, into the tome menu, zooming down on the page for alchemy, zooming in more to find the recipe you want, mumble it to yourself a few times so you don’t forget, exiting back out to the main menu, back into the alchemy menu, and trying to create something based off of what you were mumbling to yourself.

The sad part of all that? Even if you are successful and create an item, the recipe does not appear in your list of “acquired” recipes; you can only get ones added there from completing errands or earning ’em as the story progresses. That means, even though I successfully made a Fishburger from White Bread (x2), a Dumbflounder, and Crispy Lettuce, I can’t quickly select it again down the line from my recipes list; I have to either remember how to do it from scratch or go back into my tome to remind myself of what is actually in a Fishburger. In short–I really don’t like this. All it means is that I now have to play Ni on Kuni with my laptop next to me open to some recipe wiki page, instead of staying immersed in the game.

What a bummer. At this point, I’d rather just have a repeat of Dragon Quest IX‘s system.

Experiencing the swift smack of death in Ni no Kuni

I died three times last night in Ni no Kuni, and I’m only four hours into the game. To say the uptick in the combat’s difficulty caught me by surprise would absolutely nail it. I mean, yeah, Drippy warned me to avoid fighting monsters in the new area we just got to and simply make a bee-line for Al Mamoon out in the desert, but I didn’t think he actually meant that. Plus, with a Save Stone sorta nearby, I figured I could do a little bit of grinding and heal up for free before moving on. Um, that’s not how things went.

First, just like in Dragon Quest VIII and IX, death is not final in Ni no Kuni. There is no perma-death for Oliver and his familiars, and the Game Over screen offers you a choice: return to the main menu to load your last hard save, or lose 10% of your money, called Guilders, and pop back into the game wherever it last auto-saved. For me, that place was upon exiting the Golden Grove. And at this point in the game, I did not have much money, and 10% of not much is, shockingly, not that much, and so I chose to pay the pauper and restart each time. I wonder if you’ll be able to visit a bank later on and safekeep your earnings while you go out and live dangerously. It’s either that or spend a lot of it before you fight in dangerous locations since there’s a good chance you’ll lose a slice or two of your earnings.

Let’s talk about the reason behind Oliver and company’s unexpected crumbling: the monsters. Now, sure, I was feeling fairly confident leaving the Golden Grove, as I had just defeated a–well, in my eyes–fairly tough boss called the Gladiataur, which required a lot of switching between familiars and eating of sandwiches for HP regeneration and the heavy use of the Defend button. I can’t say for sure what level the non-boss monsters in the Golden Grove were, but I feel like they were around 8 or 9, which is level with where I had Oliver and two out of three of his familiars. However, once you exit the Golden Grove, you’ll find monsters seemingly around level 12 or 13, and they can completely take out the team in a few hits, especially if symbol alignment is in their favor.

The very first monster we ran into killed us. Maybe two or three hits to my level 10 Mitey. Then, heeding the words of the Lord High Lord of the Faeries, I avoided monsters until I couldn’t, as there is a sort of hound-like beast in the desert that is too fast for Oliver to avoid. It killed us fast. The third time saw me trying to take a new path over to Al Mamoon, only to have that hound-like monster stomp us flat. My fourth attempt at making it to the city proved successful, with no encounters at all, but now I’m seemingly stuck in Al Mamoon, and hopefully there are some ways to level up before I have to head back out into the wild. Otherwise, things don’t look good for the future. Sorry, Oliver’s mom.

I’m not sure if the appearance of these super strong monsters is deliberate from Level-5/Studio Ghibli or my fault. Should I have leveled Oliver up to 12 or 13 before proceeding on with the story, thus making these monsters more balanced? Though that might have then made the ones in the Golden Grove severely underpowered. And there wasn’t too much left to do in terms of side-quests in Ding Dong Dell or near it (from what I explored), so I felt it was time to move on story-wise. It’s hard to say, really. But now I expect Oliver and his battle-loving critters to succumb to Death’s call many more times; I just hope I won’t have to pay too high of a price to try again.

The first hour of Ni no Kuni: Wrath of the White Witch spirits you away 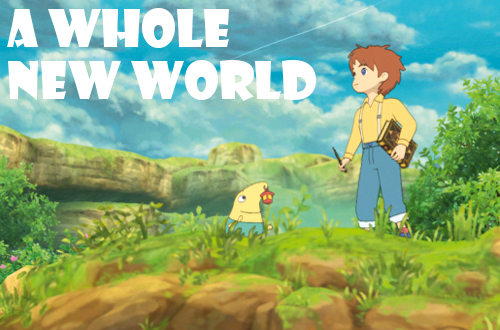 So, I made some time this weekend and played a wee bit of Ni no Kuni: Wrath of the White Witch, covering the first hour of gameplay for, naturally, The First Hour. Click that link to find out how everything went.

Since then, I’ve gotten to give Studio Ghibli/Level-5’s JRPG about two more hours of my time, and it’s been pretty dang delightful. The story is nothing astounding, but it plays by many of the same rules as fairy tales do, naming the key players and letting magic live without scrutiny. Running around the world is an experience that is very hard to describe, as it is both videogame-like and surreal, with all credit to Studio Ghibli for the way everything looks and moves. Oliver and Drippy’s animations are charismatically fluid, and the way the game breaks down every system shows the level (pun intended) of deepness one can fall into. Evidently, there will be alchemy. Oh yes. That said, I’m still having some trouble either getting into the combat or understanding it completely, and it’s mix of menu managing, character swapping, and moving around the battlefield in real time is something that I’m going to have to quickly master if I’m ever to take on a real boss or more than three enemies at a time.

So, I’ll be back later on with more thoughts as Oliver progresses forward on his journey to save his mother.