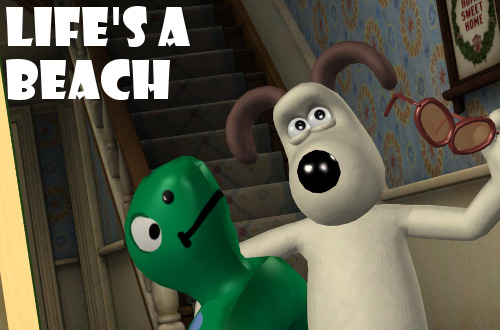 I don’t know how to get into this post without spoiling the ending to the first episode of Wallace & Gromit’s Grand Adventures, so if you are interested in seeing how Wallace and Gromit solve the problem of giant bees invading the neighborhood…well, don’t read any further. No joke. The next paragraph is going to lay it all out. Stop now, if you are behind the times like I am, catching up on these jaunty, whimsical 2009 point-and-click adventure games from Telltale Games. All right, here we go.

So, at the end of “Fright of the Bumblebees,” Wallace comes up with a way to counteract the hyper-powerful growth formula he fed to his flowers to make the bees happier, but resulted in them also growing to extreme and deadly sizes. You don’t play an active part in this puzzle solution after taking down the large Queen Bee, just see the outcome, which has Wallace coming up out of the basement beaming with excitement over his discovery. Unfortunately, in his journey to make the bees smaller, he has also shrunk himself down in size. Immediately cut to some bouncy, knee-slappy music and then the credits.

In my mind, since Wallace & Gromit’s Grand Adventures is billed as an episodic adventure series, I figured that the second episode “The Last Resort” would pick up on this zany plot twist and steer the story in its respective direction. Nope. It’s a whole separate story, and the second episode opens some time after Wallace shrunk himself, now back at his normal size with no comments on the matter. Huh. I found this really strange, and I guess we can blame The Walking Dead for its dedication to keeping everything connected from one episode to another. Granted, there’s still a loose connection to the previous events.

In “The Last Resort,” using the profits from their now-saved honey business, Wallace prepares to take Gromit to Blackpool for a little vacation time. Alas, the stormy weather both spoils their plans to hit the beach and creates a small flood in the cellar. Wallace comes up with the idea of converting the water-logged cellar into an indoor holiday resort for the rest of the townsfolk. If you build it, they will show up, and they do, but many are unhappy for various reasons, and Wallace makes it his personal mission to make everyone’s stay at West Wallaby Waterworld the most pleasant ever. Later, Ms. Flitt’s maybe-boyfriend Duncan McBiscuit is mysteriously injured, and no one is allowed to leave the house until the culprit is caught.

Gameplay-wise, nothing has changed from “Fright of the Bumblebees” in that you still both control Wallace and Gromit at different parts, walking around the environment with WASD or arrow keys and clicking on items to pick up/examine. There’s no item-combining; you just select an item from the inventory and use it on what or who you want. Something I never did in the previous episode that I discovered this time around was hitting the tab button, which highlights everything on a screen that can be interacted with. That’s neat, though it’s pretty obvious what items and people can be interacted with within a single scene.

I’m nearly done naming Duncan McBiscuit’s attacker(s) and proving it with hard-steel proof, but at least I know that episode three “Muzzled!” will only be loosely connected to whatever unfolds from here onwards. Regardless of that, I’m still enjoying the bombastic stories and silly character motivations and plan to see this whole series to the end. Truthfully, I just can’t get enough of Gromit staring into the camera, shaking his head.