Searching high and low for vampire hysteria in Kisilova

I don’t have an Android phone. Loyal Grinding Down readers will know that I have continued to tread water in an ocean of hungry sharks with my fancy-shmancy Windows phone, though I do expect my next upgrade to be something different. Yes, yes, I’m highly tempted by the potential of a new Animal Crossing game on phones in the future. So, no Android-based mobile device currently, but thankfully I have a laptop with Steam installed on it, which allowed me to partake in the Humble Mobile Bundle from Artifex Mundi, as they all came with bonus Steam keys. At this point, there’s not much that can stand in my way of a bundle that can help my digital library expand.

Okay. Let’s do this. Are you ready for the list of games from this bundle that I never heard of beforehand and chances are neither did you? Good, good. Because here they are, in no particular order, but in all their generic name glory nonetheless:

Mmm-hmm. Also: yowza. It’s like the creators picked a bunch of videogame title mainstay words, threw them in a hat, mixed it up wildly, and created games based around whatever was pulled at random. Personally, I’m pretty tickled by Crime Secrets though. Crime…secrets. However, because I’m broken inside, I started with Vampire Legends: The True Story of Kisilova. Not because I love vampires–though I did end up re-watching Twilight recently to see if I’d recognized any locations after visiting Seattle, La Push, and Forks in Washington with my father last summer. No, I picked it first for two simple reasons:

What do I mean by that second point? Well, Vampire Legends: The True Story of Kisilova is based on the first documented case of vampirism. Allow me to set the stage: it’s 18th century Europe. Fifty years after a great plague swept the land of the Habsburg dynasty, the subjects of the Emperor are in danger once more. A series of horrifying, mysterious deaths occur in the remote Serbian town of Kisilova. Residents, fearing that the plague is back, begin fleeing their homes. Summoned by the Prince of Württemberg himself, Imperial emissaries journey to Kisilova to investigate these events and prevent further deaths from happening. You play as one of these investigators, and I’m sure you have a name, but I can no longer remember it.

Have I yet said what kind of game Vampire Legends: The True Story of Kisilova is? No? It’s got puzzles and hidden objects to unearth and exploration, moving from one location to another to find clues and items to progress the narrative. Steam uses the tag “casual” on its store page, and I am in full agreement of that. It’s casual, and I played it casually. Like, I played a few hours of it when I got the bundle back in September 2016, and then I came back recently to finish the thing off in a few more sittings.

Vampire Legends: The True Story of Kisilova is a strange mix, both in terms of what you do, but also what you hear and see. There’s voice acting, and it’s a little rough to endure, especially the voice of the investigator you control. I understand this isn’t modern times, but everyone speaks so stiffly and uncomfortably that dialogue is a struggle to listen to. As it turns out, the puzzles are the meat and most enjoyable aspect of the game, and the narrative exists only to serve you more puzzles in the frame of roadblocks, and so the voices and dialogue can be completely ignored. I ended up playing the latter half of the game with Netflix on in the background. Many of the puzzles are of the “use the right item here” mindset, and sometimes you have to travel through several locations to find the key gizmo. Not hard, but satisfying. I personally found the hidden objects sections more enjoyable, remembering how much my mother liked this type of gameplay on her Nintendo DS. The hand-painted scenery, which is really jarring against the animated avatars whenever they take center-stage, is nice to look at and highly detailed, though that does mean some pixel hunting has to happen.

I have to imagine that I’ll be trying Crime Secrets: Crimson Lily next. Again…crime secrets. Makes me laugh. My best guess is that it’ll be pretty similar to this experience, but that’s okay. Like I said above, the puzzles are fun to figure out, and a good hidden objects checklist scene is something I simply can’t ignore. It also doesn’t punish you for clicking like a madman when you only have one item left to find and cannot see where it is. More is fine. There will be plenty more for the rest of 2017 too thanks to this Humble Mobile Bundle from Artifex Mundi. 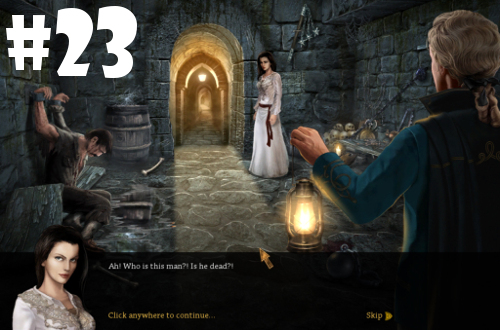