Tag Archives: Too Many Cooks 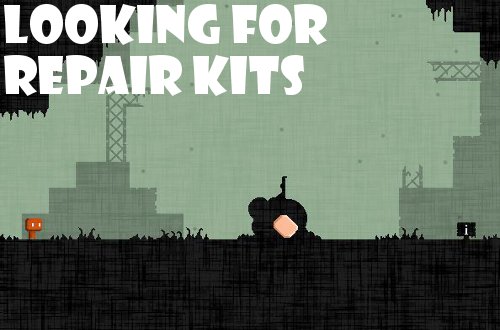 I really need to start spending more time perusing Adult Swim’s gaming subsite. I mean, previously, they blew me away with Winnose, a surreal puzzle thing blistering with catchy tunes and tricky riddles, and sort of impressed me at the start of Westerado, that Western tale of revenge murder and retro graphics. Plus, if I remember correctly, they are also behind Jazzpunk, a zany adventure game that I do have in my Steam library and hope to play both before the year is over and I have it spoiled for me on the Giant Bomb GOTY podcasts. Either way, they put out strange, unique experiences–“Too Many Cooks”, anyone?–and Insidia, while actually rather plain and straightforward, is still a solid half hour of fun.

What’s Insidia all about? Well, it’s about a traveler, who may or may not be a female automaton, who has to make an emergency landing on a dark, strange planet in order to fix her broken spaceship. Ten repair kits will do the trick. To find them, you’ll need to explore and collect several power-ups, like double jumping and moving faster, which allow you to access new parts of the map. There are also ten hidden areas containing switches to flip, and if you want the best ending, you’ll need to discover them all. Otherwise, the darkness will consume you, which is probably the same fate that fell on those skeleton in cages you are trying not to notice in the background as you move about.

Speaking of moving about, you can use WASD or the arrow keys to move, X to jump, M to bring up your map, and T to safely teleport the traveler back to the spaceship at any time. That last point is great, considering the spaceship is near the middle of the map, making it handy for cutting down on backtracking. I found both moving and jumping with the arrow keeps to be less reliable and switched to a letter key for jumping and had little problems after that. There are save points everywhere, but you don’t actually lose any progress if you die, so they act more like respawn points. You can totally collect a repair kit, jump into some spinning spikes, and restart four screens over with the repair kit still collected. I persevered, and after about twenty minutes or so collected all ten repair kits, as well as flipping the ten hidden switches, which allowed the little orange robot to lift off the planet free from harm.

Insidia obviously looks like a handful of other small, indie platformers of late. Thankfully, I’m a fan of this simplistic, old-school style, but it does try to be its own thing, with a sort of sketchiness to it. Seeing it and the monster designs in motion shows that there is great personality here, and a single haunting song makes up the whole soundtrack, shadowing your jumps with clinks and clanks and techno-esque bloops. It helps build ambiance. If there’s one nitpick–and naturally this is one I’m always going to gripe on when it comes to games–it’s that the text for both the intro/end cutscenes could use some serious editing, as well as the tutorial messages. Saw a number of spelling mistakes, as well as just strange wording, which is a shame as the cutscene art is quite cool.

Anyways, you can play Insidia right over here, so stop reading and make with the clicky clicky.