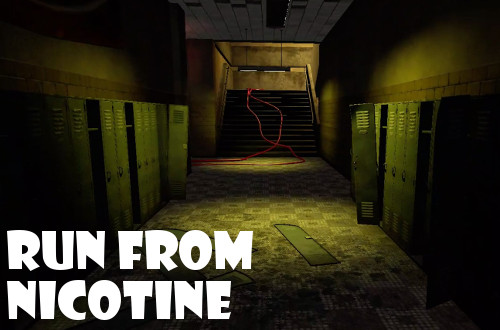 I’m not a smoker, but I did try a cigarette in high school–thanks, peer pressure!–and found it to be a terrible experience. I immediately began coughing uncontrollably, doubled over, and have never smoked another cig since. Sure, I’ve had some pot and cigars at various points in my life, but those are much different beasts to me, and I’m not addicted to them so many years later.

One Leaves‘ entire narrative is wrapped around quitting smoking, how smoking is bad for your health, and how badly it affects the body. I agree; don’t do it. There’s also elements of tobacco-related death in the game, with a theme that uses statistics to relay the fact that the few who start smoking rarely ever give up. I’ll credit the game for this because it is an important message that any smoker should hear. Alas, it’s difficult to take the game’s message very seriously at all due to how it plays and treats the player.

One Leaves starts out by placing you in a cage. Here, you’ll see three other characters in cages of their own. Each of you has a door to enter, which is locked until an audio message tells you that only one of you will escape. Hence, the game’s title. The moment the door opens, you’re free to patrol the game’s confined environments at your own pace though I guess the point is to move face and with urgency. You’ll immediately see a locked gate that has some power cables running from it. The goal is to follow each cable until you meet its puzzle; solve said puzzle, and move on to the next one until you reach the final area, which is a randomized maze to navigate.

There’s no shortage of framerate issues to contend with, as well as regular crashing and kicks to the Xbox One’s dashboard, which, for a free game isn’t the worst thing ever, but it also isn’t great either. Visually, One Leaves is ugly, complete with poor lighting, bland textures, and a lackluster presentation. The game’s audio work is also subpar.

Alas, I didn’t make it through the final maze quick enough, and so I’m stuck in One Leaves‘ smoky purgatory until another contestant tries to make an escape. Until then, I guess I’ll just hold my breath. 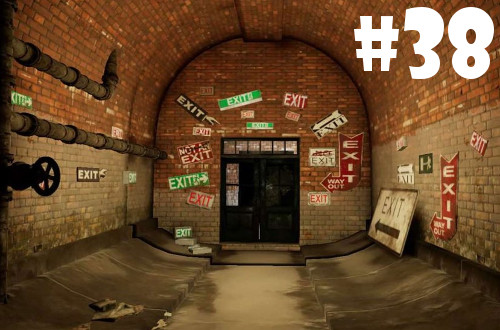 And we’re back with these little haikus of mine. Go on, gobble ’em up. However, if you want to read more of my in-depth thoughts about these games that I’m beating, just search for them by name on Grinding Down. As always, enjoy my videogamey take on Japanese poetry, even if they aren’t instant classics, such as the works of Matsuo Basho, Yosa Buson, or Kobayashi Issa. Hey, not everyone gets to be that great.