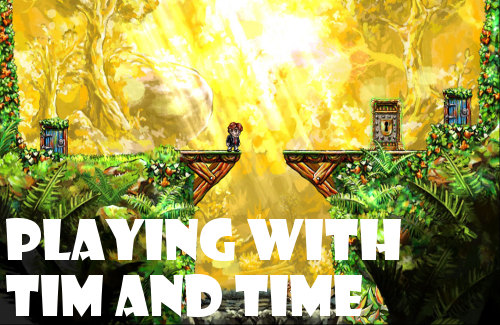 I played a little bit of Braid back at the end of August 2011, during the time that Hurricane Irene came swooping on in and knocked out power at Grimmauld Place for a week and then some. Stuck at the in-laws, I only had my Nintendo 3DS and laptop to entertain me videogames-wise–Tara’s dogs and old VHS tapes provided non-gaming fun–and there was only so much of The Sims Social I could take. So I loaded up Steam for like the third or fourth time ever and gave Braid a spin, using just a keyboard to govern Tim and time. It was not easy, but thankfully, the game itself is not punishing, and actually needs you to rewind your mistakes to learn how to progress forward. I got to the end of World 4 before stopping, but let me preface that with the fact that you actually begin Braid on World 2. So, uh, yeah.

And for the most part, I just walked from the beginning of the level to the end. Occasionally, I’d tried to get some of those shiny puzzle pieces, but if they proved too complicated, I just moved on. And the game is fine with that. You can literally go from beginning to end on some levels in under a minute. Just keep going right; Mario would be proud. As Jonathan Blow says, it’s “about the journey, not the destination.” Well, my journey was often that of a tourist, going forward and taking in all the gorgeous sights while trying not to disturb history. If I could, I hopped over enemies instead of on them. I do not regret breezing past some puzzles, as they will still be there when Tim decides to return.

Some of Braid‘s story elements had already been spoiled for me at that point by the Internet, so that was the least compelling part. The puzzles though, they remained unspoiled…and good for me. They are works of art. Clearly planned and executed in a way that mattered to the game’s  mechanics and mood. Even the simplest of them still give off a good feeling aura when completed.

Flash-forward to now, 2012, the year of our unmaking, and I’ve been using Steam a lot more thanks to a capable laptop. Y’all remember that I recently bought a second copy of Skyrim, right? Well, I’ve been playing it with my Xbox 360 controller plugged into the USB slot, and it’s been fantastic. I thought to give some other games in my Steam library a chance, too, to see if they were more enjoyable with a controller versus a mouse and keyboard. And they were–Trine and Super Meat Boy. Braid, too. It just felt more natural to jump about and rewind time using a controller. I dunno. PC gamers can hate all they want, but platformers and controllers go hand in hand.

And for giggles, here’s some Steam Achievements I unlocked, which are totally different entities than Xbox 360 Achievements:

Traversed World 5: Travel all the way across World 5.

Traversed World 6: Travel all the way across World 6.

Solved World 2: Fit together all the World 2 puzzle pieces and align the puzzle in its frame.

Okay. Will hop back in soon to hopefully finish Tim’s heroic journey up, though I suspect I’ll need to look up some walkthroughs to get all the puzzle pieces in Worlds 2-6 as many look quite tricky and daunting; however, I’m quite proud of myself for getting them all on my own in World 2, as well as defeating a certain boss using the clone recording mechanic. Guess I retained some skills from playing The Misadventures of P.B. Winterbottom long before Braid.