Takes two to solve puzzles in Two of a Kind 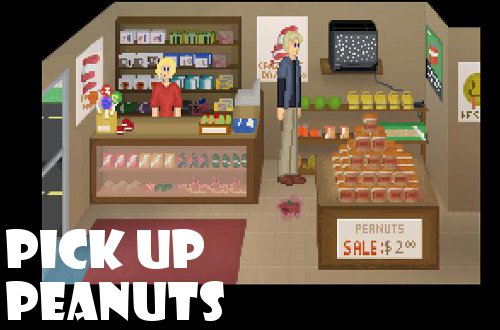 Chances are high that I would probably enjoy being an archaeologist, digging deep and surveying, excavating, and analyzing collected data to learn more about the past. As a kid, I had more than just rocks in my rock collection, occasionally finding some broken piece of clay or a weirdly shaped hunk of metal, and a small part of me always believed I had stumbled upon greatness. Now, the true purpose of archaeology is to learn more about past societies and the development of the human race, but I think we can also apply the science to videogames. However, I’ll pass on all the constant danger that Indiana Jones finds nipping at his heels, like rolling boulders, pits of snakes, and Nazis.

Which leads us to Two of a Kind by Dave Gilbert, the man who has given us numerous adventure games over the years from his small, but growing Wadget Eye Games. If you’ve not been paying attention to the most recent activity on Grinding Down, I’ve been on a point-and-click kick as of late, finishing up Machinarium, Deponia, and a number of smaller, shorter adventure games. Plus some Ben Chandler joints that I’ve yet to talk about, but will be doing so next week. Truthfully, this is all in preparation for two forthcoming titles: The Blackwell Epiphany from Wadget Eye Games and Broken Age from Double Fine, which I both expect to have some tricky, dastardly puzzles, and I plan to play them as soon as they release, with no chance of an online walkthrough handy. Gotta brush up on my pixel-hunting and inventory management skills.

Anyways, Two of a Kind is a small adventure game released for free at Adventure Game Studio in November 2004. It’s about an unusual town called Bluff City, which is full of people with unusual abilities. For instance, Tim and Tiffany Walters, fraternal twins operating a struggling independent private investigation business. Tim has the power to float off the ground, and Tiffany can communicate with animals. Other townspeople you’ll bump into also have powers, and it’s kind of like X-Men, but without all the smoke and rubble and misshapen limbs. The Walters siblings are very close to each other after experiencing a traumatic childhood, which they no longer discuss. Bills have been tough to pay as of late, but a new case offers a great financial opportunity. A priceless crystal was stolen from the local museum, and it’s up to them to find out the who, the how, and the why before the press gets wind.

Now, in all my years of gaming, I’ve not actually played many old-school adventure titles, the kind controlled by means of text icons like “look,” “open,” “use,” and so on. Think LucasArts started this trend. When I played Monkey Island 2: LeChuck’s Revenge back in 2011, it was an enhanced version, updated to be more convenient for a controller. Basically, I came into the genre really late, and so my experience in using these text-based commands is quite limited, rusty. This was more than evident when I struggled to have Tim leave his apartment building; first I tried using “use” on the door, but that did nothing. Turns out, I had to use “open/close” on the door, and then “use” to walk through it. Oi. Like I said before: archaeology. Playing a text command-heavy game in 2013 was a slow process for me, as I found myself trying everything on everything. Can’t “use” that trash can? Well, let’s try “talking” to it and “opening” it and “giving” it to Tiffany. Been coddled for too long with just a right and left mouse button clicks.

After getting used to have to do things the archaic way, puzzles in Two of a Kind are fairly easy to deduce, especially if you’ve played some of the Blackwell games. Because just like in those, you control both Tim and Tiffany independently, just like Rosangela and Joey had their own things to do. I got stuck in a few spots, but only because I missed picking up an item earlier, and there is actually a walkthrough out there still for the game. Otherwise, so long as you keep trying items and different combinations, the solutions will come. Every item gets used; yes, even the ones Tiffany holds in her pockets from the very beginning of the game. Ironically enough, I was not aware that the final puzzle was being timed, and actually got a GAME OVER screen after failing to solve fast enough.

There’s no voice acting, which is all right, as there is a lot of text to digest, and I just can’t imagine anyone reading for the part of Tiffany doing it any kind of bearable justice. She’s a teenager that acts like a child–probably because of that previously mentioned traumatic childhood–and is constantly talking in kiddy gibberish to animals and being overexcited about literally everything. At one point, inside a mansion, I had her examine the most mundane items like a toaster or sink, and she responded to each with genuine excitement, a being of pure innocence. That aside, Gilbert’s writing is fun and personable, and his characters do come alive from it, especially the quiet bartender, the soaps-loving Oracle, and the drunk bum with the funny hat. The plot, which revolves around open sleuthing and chatting with animals and using magical powers, moves forward at a reasonably logical pace, but kind of jumps the (acid water) gun at the very end and fizzles out with a Candy-Land joke. I was hoping for more resolution, maybe a trip back to the museum to see Tim and Tiffany explain all the crazy antics to the concerned curator.

Overall, I think Two of the Kind is still a solid experience some nine years later, definitely worth playing for the solid writing and killer soundtrack, and I think Wadget Eye Games should re-release it like they did recently with The Shivah and get Ben Chandler to do all new art for it. C’mon, think about it. I know you’re reading this. 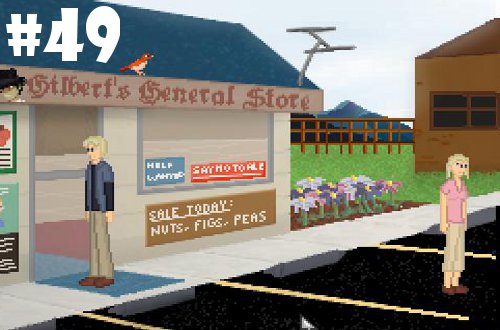