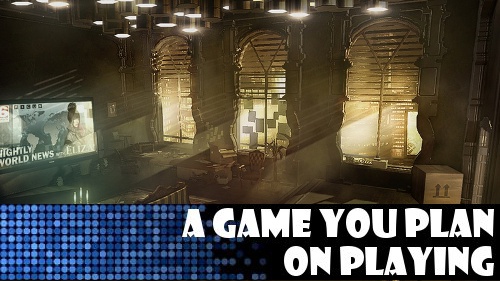 As with many other topics for the 30 Days of Gaming meme, there are always a number of choices. Or at least I assumed there would be for today’s topic train. But when I sat down and took the time to mimic Auguste Rodin’s most famous sculpture, I found very few game titles coming to mind in terms of “playing soon.” Especially in terms of new releases. Sure, there’s two big blockbusters dropping in November 2011–The Elder Scrolls V: Skyrim and Assassin’s Creed: Revelations–but to me, that’s not soon. That’s a couple months away. That’s an entirely different season.

And as a 3DS Ambassador, I’m getting a boatload of games over the next couple of months, but all of those titles are nothing new. Most pre-date fire. I’ve already played a majority of them at some point in my sad, little life, and I kind of suspect that–while I will download them all–not all will get love and play-time. I’m too busy for even 10 new games at once, and it might very well just break me in half.

Looks like the next game coming out soon that I’m gonna get to play is Deus Ex: Human Revolution. That pops up towards the end of this month, August. I’m quietly interested in it simply for the fact that it will be as close to a new Fallout experience as I can get currently. And probably won’t have as many bugs as that game does. Though I’m a little worried about how blurry it looks, with a lot of bloom and lens flare effects, and whether or not I’m going to be able to read its text. It gives off the tiny text vibe.

Funnily enough, weeks ahead, I already know that I’m going to play it as stealthy as possible. According to developers, with a combination of certain skills and augmentations, it is possible to play through the entire game killing nobody, but the bosses. I’m down with that, regardless if there’s an Achievement linked to it or not. Confrontation is for kids–or braver people than myself. I’d rather talk my way in or entirely avoid danger or just walk around in another universe, happy to be elsewhere. Might have to pop back in Deus Ex: Invisible War to refresh myself on how this series ticks.

So, yeah, this is a game I plan on playing. What an exciting meme topic. For my next trick, I’ll share with y’all some food I plan on eating.