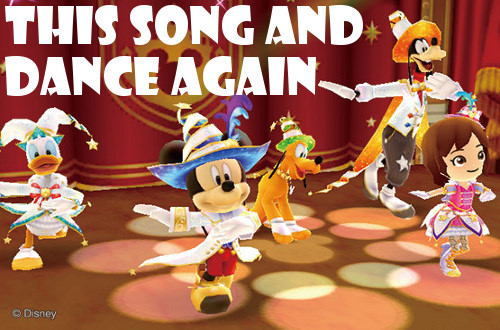 According to my records, I’ve played Disney Magical World 2 for a little more than half the amount I dumped into the first game, which has the honor of being one of my most-played games on the Nintendo 3DS, bumping elbows with other critical darlings like Animal Crossing: New Leaf and…Netflix. I’m not even near a 50% completion rate. That first game was a super addictive life simulation thing with more than two handfuls of quests to constantly be working on that came out right at the time I needed it to most, and the sequel is all of that again plus more. I got it and Pokémon Moon shortly around the same time last year, and I haven’t touched the latter for more than a couple of hours in November. Sorry, my cute l’il Rowlet baby, I promise to be back shortly.

Once more, you the player, using either a custom character or the Mii that is on your Nintendo 3DS, arrive in Castleton and are magically the only person able to help everyone with their multitude of problems. These include reuniting a musical band of sea critters in The Little Mermaid‘s realm, ensuring Pooh has enough hunny for a picnic, helping those seven dwarfs clean up in preparation for Snow White’s arrival, and so on. There’s a bunch of new, big name worlds to explore–alas, still not an inch for The Incredibles–and each realm is ripe with materials to collect, characters to interact with for special items or side requests, and larger story missions that take you to dungeon-like locales to fight off ghosts using your magic wand. A couple worlds, like Lilo & Stitch and Snow White and the Seven Dwarfs, feature mini-games too though they aren’t worth spending a lot of hours on.

The main goal hasn’t changed beyond collecting Happy Stickers. Sure, you can grow your café, earn lots of money, tend to a garden, and find new recipes for food, furniture, and clothing, but it continues to be all about them stickers, which are earned by completing specific tasks, such as catching so many fish or clearing a specific number of episodes. Ultimately, these dictate unlockable content or areas and what quests you can take on so it behooves you collect them as you go so you can have more to see and do. Everything feeds into one another, so, no matter what, you are always making progress, which is a thing I love. At the beginning of the game, you’ll see areas locked behind a high number of stickers and think getting there will be impossible, but all it takes is time and dedication. By the end, there’s so much to juggle that you’ll think back at the lengthy opening and how little you could do then and chuckle.

Here’s what was taken away in Disney Magical World 2, much to my dismay: collectible pieces of art every day, whether animation frames or original movie posters, from characters all over in Castleton. Instead, you gather puzzle pieces, and once you acquire a full set and the respective border, you can visit the themed land in the Dream Realm, which mostly exists for silly pictures, but also gaining a bunch of “like” points in one big gulp. “Like” points buy stat buffs, special recipes, and missing puzzle pieces through random chance. I’m not a huge fan of this trade-off. Art is cooler. Also, the dungeons are much more linear with claustrophobic challenge rooms instead of open, almost maze-like corridors to run down and discover enemies or items. When you throw a good party at the cafe, you can now do a song and dance with your guests, which, again, seems to only exist for picture taking. The real reason you throw a big party is to get those characters to permanently show up on a daily basis in Castleton.

So, spoiler territory here–and yeah, I consider this spoilery because if it was something I had known about beforehand it would have definitely lessened the woah factor for me when it happened–but credits roll in Disney Magical World 2 immediately after you earn all 100 stickers and return to the castle square. However, just after that, you are presented with another bunch of quests to keep working towards: pro stickers. These consist of more of the same (build X many pieces of furniture, wear X number of Ace Ensembles), but there are a few others that do demand some time and effort to unlock. Each of these stickers comes with a special item too when you earn it, such as new themed wands and Easter clothing/furniture. I figured the game was mostly over, but nope.

Speaking of Easter, that’s the next time the game will switch over in terms of look and events, starting on April 1. So far, it changed for Halloween and Christmas. I was hoping for at least something for either Valentine’s Day or the month of leprechauns, but alas, no. I wonder if Rabbit from Winnie the Pooh‘s realm will play a prominent role during this upcoming time. Either way, even with the new pro stickers to go after, I won’t be playing this as much until the seasons alter and offer some new outfits/items to enjoy. I really have to get back to Pokémon Moon and then there’s the upcoming remake of Dragon Quest VIII: Journey of the Cursed King.

The Wolf Among Us is where wolves fear to prey 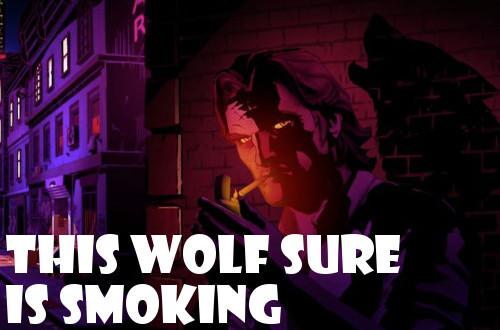 I got through a decent chunk of The Wolf Among Us last year during my Extra Life event, sleepily playing it in the wee hours of the morning after I found myself walking off ledges too frequently in Dark Souls. Part of me suspects the reason I picked it is because, if I nodded off momentarily during a conversation scene, the scene can keep going, selecting “…” as Bigby’s appropriate response. I guarantee this happened a few times. I gare-run-tee it. I’m also fine with my Bigby being a bit shy or passive in his interactions with some people, even if later I made him ultra assertive and demanding when push came to shove. You gotta break a few eggs to make an omelette, y’know.

The Wolf Among Us, which I constantly wrote incorrectly as A Wolf Among Us in its game review haikus, is a prequel to Bill Willingham’s Fables comic book universe, of which I’ve read not a single page. Bigby Wolf, formerly known as the Big Bad Wolf, is the Sheriff of Fabletown, which is a hidden community of fairytale characters located in New York City in the 1980s. After receiving a phone call from Mr. Toad, Bigby saves a young prostitute from an intoxicated and extremely vulgar Woodsman. He escorts her away to safety. Alas, later that night, Bigby is shocked to find the woman’s severed head left on the doorstep of the Woodland Luxury Apartments. Deputy Mayor Ichabod Crane orders him and Snow White to investigate her death.

I’ve had problems with these adventure romps from Telltale Games since basically the first mainstream one I touched: season one of The Walking Dead. I enjoyed that one a great deal, even if I saw that it was more adventuring than pointing and clicking and had a couple complications, but this was a different beast, playable first on a console and designed for a controller and distinctive pace. I’ve stopped referring to these as point and click adventure titles. They are dialogue adventures. Season two of The Walking Dead was a whole lot less game, and this carried over to Game of Thrones. I’ve not tried Tales from the Borderlands, Minecraft: Story Mode, or Batman: The Telltale Series yet, though I do have their first episodes downloaded and ready to go, but I suspect I won’t find anything new to love there.

In The Wolf Among Us, players control Bigby Wolf, who is investigating a murder. You’ll “explore” various environments throughout Fabletown, such as apartment buildings, a bar, a butcher’s shop, etc. I used quotation marks because you are extremely limited in where you can walk, and there are only so many things to interact with. Many are just there for lore and to unlock entries in your Book of Fables guide. Occasionally, items of interest are stored in an inventory on the side, but you don’t access this like you would in a more traditional point-and-click title; instead, if you have the item, it can come into play at a later time automatically. Gameplay ultimately boils down to talking with a host of pretty memorable characters, with conversations presented in the form of dialogue trees and responses on a timer. Depending on your choices, these will have a positive or negative effect on how people view Bigby, as well as larger plot-points down the road. Many scenes are heavy on action, requiring players to respond rapidly through QTE prompts, such as fighting off bad dudes or chasing after a vehicle speeding away. I failed a couple of things here and there, but unlike Shenmue the story thankfully moves forward regardless.

Here’s where The Wolf Among Us shines, obviously: the writing. It’s an entertaining, complex story, with a cast of characters that are fun to recognize and see how they fit into this alternative realm. Bigby is a villain trying to live a better life and help who he can, struggling to shed his past skin. That comes through strongly in the story, and his interaction with Snow White, at least the ones I saw and decided on, spoke volumes without every directly saying what each person thought of the other. I also liked the interaction between the fairytale characters that could pass among humans versus the ones that couldn’t without using expensive treatments called glamours, such as Mr. Toad. The real villains are villainous, and I found the Crooked Man to be profoundly striking, using his smarmy, distrustful words and loyalty of his goons to get his way. Spoilers: I let him talk for a good while before deciding to alter his form for good. That said, I think the end conversation between Bigby and Nerissa was meant to be more profound, but it came off as plain ol’ confusing. If you want to read some theories, here’s a good starting place.

I had the luxury of playing The Wolf Among Us mostly back to back after getting the whole thing at once from Games with Gold in April 2016, but for those that experienced it episodically, spread out over nine months, I can see some episodes not really satisfying or feeling like enough. The action scenes are few and simply a bunch of button presses, and I found it hard to sometimes see what was going on because I was more concerned with which button to hit next. That’s the most gameplay you get, and the rest is Bigby lone wolfing it on the streets of Fabletown, talking to people and responding accordingly. There are parts of the game where you can only go one way or another due to time restraints, which theoretically leads to replay value, but I don’t like replaying these things from Telltale Games because, to me, my first go-through is my only go-through. The decisions I made, the words I spoke–like real life, there’s no do-over.

Wait, remember earlier when I said that the writing was the best part of The Wolf Among Us? I was wrong. I forgot that the intro title sequence is amazing, using shadows and purple neon and deep, pulse-laden electronica music to set mood like nothing before, save for maybe Stranger Things. Even if that feeling doesn’t last for the entire episode, it certainly kicks things off on a great, furry foot. Let’s end this post on a highlight, on that. If Telltale Games doubles down on ambiance and atmosphere for season two, if there is to be one, I might return. I might.

Grinding Down‘s readers will remember that.