Golf is not a fair game in The Bogey Man 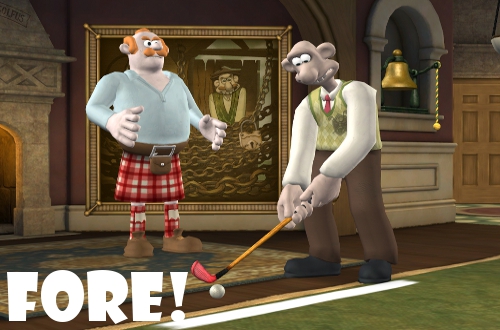 Ah, here we are, the final episode of Telltale’s Wallace & Gromit’s Grand Adventures. It all began with bee-growing trouble in Fright of the Bumblebees, then delved into the ins and outs of running one’s own in-door beach resort in The Last Resort, and lastly dealt with a con-man trying to steal dogs and dough simultaneously in Muzzled! This fourth episode focuses very much on the sometimes relaxing, sometimes stressful game of golf. I’m going to honestly try my best not to load this blog post up with a zillion golf puns, but understand that you are asking me to resist doing what I love most, and so it’s a challenge. Like, all I really want to do is say that after three episodes of pointing, clicking, and rather routinely solving puzzles, this final act is actually just more of the same…par for the course, if you will.

Anyways, The Bogey Man, unlike the other episodes, picks up immediately where the other one left off, and I’m going to have to spoil what happened at the end of Muzzled! in order to explain why Wallace is out doing what he’s doing. See, in a moment of pure coincidence, Wallace accidentally proposed to Felicity Flitt and is currently awaiting her answer. We all know he wants to live the single life and spend his hours noodling away with inventions in the basement, but Miss Flitt seems good to go, so long as Wallace isn’t a member of the snooty country club called the Prickly Thicket. Cue Wallace–and when put to it for his master, Gromit–doing everything possible he can to, first, get in the club and, second, ensure it stays operating since Constable Dibbins is set to close it down out of pure jealousy. All for love, of course.

You do get to play some golf in The Bogey Man, but strangely it is never on an actual golf course. I found the game’s cover art very misleading. Instead, you’ll play two holes–read two puzzles–through town and Wallace’s own home, as well as figure out a memorization-heavy riddle back in the country club’s headquarters, which requires Wallace and Duncan McBiscuit to hit a series of five paintings in a set order. I found the finding the three keys puzzles to be overwhelming and unfocused, especially since you get clues for all of them in one bang and are then left to attack them as you please. These required some back and forthing, and I eventually looked up the solution to one of them after growing frustrated. Everything else was pretty easy to figure out as, again, you only have so many items and options available to you, so trial and error will get you to the end eventually.

The previous three games focused on a big baddie villain–queen bee, devil dogs, mustached menace–while The Bogey Man is…more reserved. Though Duncan can be a jerk. Sure, there’s a complicated mechanism in the country club that goes haywire to protect its deed, forcing Gromit to unravel things while Wallace and friends are trapped inside a room quickly filling with sand–see, a sand trap–but otherwise, it’s a pretty low-key affair. Instead, you learn a lot more about Wallace, Gromit, Duncan, and Miss Flitt’s ancestors, and even Major Crum gets an interesting piece of dialogue now and then. It’s quieter and probably not what you’d expect in a finale, but I enjoyed getting to know where these characters came from, and seeing some resolution for the Flitt/McBiscuit sub-plot was a nice touch, one I didn’t expect to see right there, minutes before the credits rolled.

Well, with Wallace & Gromit’s Grand Adventures now played and done, I can move on to…other episodic series of adventure games. Like Back to the Future or Sam & Max, still sitting pretty and uninstalled in my Steam library. Or maybe I should go back to focusing on smaller, singular experiences. I do need to eventually get around to Ben Chandler’s PISS, which is a weird thing to write, as well as the latest–and last–ghost-absolving journey for Joey and Rosangela in The Blackwell Epiphany. Hmm. Choices, choices…