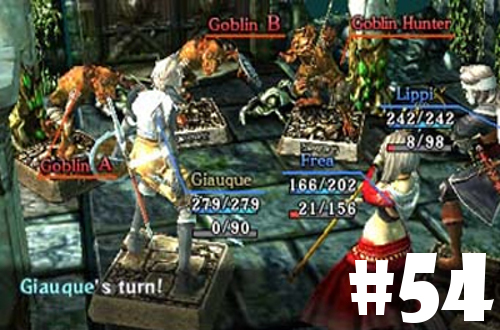 I have a problem. Well, more specifically, my Nintendo 3DS has a problem. See, there are updates to both Pokémon Shuffle and Nintendo Badge Arcade that I desperately want to install, but I can’t download them. I also have a code for Retro City Rampage: DX thanks to the latest Humble Friends of Nintendo Bundle that I can’t do anything with yet. Why? Well, of course, after many years of downloading things like games, DLC, themes, and StreetPass data, the system’s memory is just about full.

Upon reviewing everything that is installed, I noticed that Crimson Shroud is extremely large, coming in at 1,965 blocks. Yowza-bo-bowza. However, me being me, I can’t simply just delete this outright, and so I’ve gone back in to this magical land of figurines and digital dice, to figure out how to progress in hopes that I can complete the game and then feel justified in removing from my handheld. I did this with Attack of the Friday Monsters! A Tokyo Tale, though there is a part of me that wants to revisit that game relatively soon down the road, especially with summer creeping on in.

See, last I played Crimson Shroud, which I sheepishly admit was back in January 2013, I had just defeated the Zombie Minotaur boss and was looking forward to exploring the area more. Unfortunately, to progress forward, you have to work through one of the most obscure puzzles I’ve come across in all my years gaming. Which is over twenty-five. Anyways, after dealing with the Zombie Minotaur, our trio of adventuring table-top figurines–Giauque, Lippi, and Frea–make their way to the Gerseym Waterway. There, you need to recall something Frea previously said:

“If you’re going to continue to search this way, you’ll need something to dispel the darkness–a gift. Anything with a gift like that would be an enemy to any mage. More of a curse than a gift, really.”

Right. Evidently, from that, you’re suppose to know that in order to move forward and not perpetually explore the limited number of spaces over and over and over again you need to obtain a single item called Obsidian Daphne. However, you won’t find this in a treasure chest or somewhere on the map. It needs to drop from a battle encounter, one specifically involving a Skeleton Mage. Your best bet for finding Skeleton Mages to battle against them in the Gerseym Waterway, but it’s not as simple as just getting into a battle, taking them down, and walking away with their sweet, puzzle-solving loot, and this is probably why I eventually put Crimson Shroud down despite loving rolling digital dice to regain MP.

Okay, every time you move away from and back to the space for the Gerseym Waterway, you get some muddled text and the chance to fight some monsters. A choice, really. Here’s the rub. There are four types of encounters you can…well, encounter. Not all of them contain Skeleton Mages as enemies, and the only way to know is to first take out an enemy and see what it gets replaced by. I think there’s a higher chance of a Skeleton Mage showing up if you destroy the Skeleton Archers first, but that’s just me guessing. Regardless, if you get the wrong encounter, you’re out of luck, but must still finish the fight, which takes several minutes as the enemies have a lot of HP and do not go down swiftly. Then you have to rinse and repeat your actions from before and pray to the skies above that you walked into the correct encounter. Remember, each of the four types of encounters have the same initial set of forces, so it’s all a crap-shoot from the get-go. For me, this took about an hour to do, and I almost missed grabbing the Obsidian Daphne at the end from the list of available loot. Eek.

Alas, that’s all the progress I’ve made so far in Crimson Shroud. Granted, it’s big, and hopefully there isn’t another section just like it up ahead, but I found the whole thing unnecessarily frustrating. I’m only on chapter two and already looking up online walkthroughs. Also, I’m beginning to remember another major issue I had with Crimson Shroud, and that comes down to screen real estate. With three party members and upwards of four enemies on the top screen, plus other information, it can be a bit hard to see what is even going on. I’m all about portable RPGs, but this one might make the case for being on one of those fancier Nintendo 3DS systems with the larger screens.

Oh, and once you find the Obsidian Daphne, it is used up immediately to further the story along. I didn’t even get a chance to hug and kiss it–after all that.

Gloom is a macabre morsel of merriment

Gloom asks you to laugh in the face of others’ displeasure, perfect for an evening of beer, pretzels, and friends, so long as everyone is in the mood to make much mayhem. Also, alliteration. It’s not a great fit for more serious gamers, thirsty for strategy, but I’ve found the game of inauspicious incidents and grave consequences a strong palette cleanser after energy-draining, often soul-crushingly long sessions of Lords of Waterdeep or Kingmaker.

In Keith Baker’s Gloom card game, which came out in 2005, you assume control over the fate of an eccentric family of misfits and misanthropes. There are four families in the base set, each containing five members: Blackwater Watch, Dark’s Den of Deformity, Hemlock Hall, and Castle Slogar. The goal is easy enough: make your family suffer the greatest tragedies possible, and then kill them off one by one. Modifiers like “Was galled by gangrene” and “Was swindled by salesmen” add negative points to your people by lowering their self-worth, and the player with the lowest total family value after an entire line has been wiped out wins.

Gloom‘s gameplay is rather simplistic, but still requires some planning. Each turn, you get two actions to play modifiers on your family or an opponent’s, event cards, and untimely death cards. Please note you can only kill someone on your first action every turn, preventing you from loading Lord Wellington-Smythe up with a lot of self-worth and then forcing him to kick the bucket. The event cards can really shake things up, but other than them, it’s perfunctory card action, with a few rule changes to pay attention to, all of which are stated directly on the cards themselves.

The real magic behind Gloom is in the stories it births. When you take control of a family, you play the narrator of their lives, coming up with reasons why they went here or there and did this or that. It’s better to play a modifier with passion and reason than simply to give a character negative 15 self-worth. Sure, it takes imagination and effort, but it is worth the storytelling, especially when you begin to link your families with others, like the time I decided that Butterfield, the butler for Hemlock Hall, was actually married to Grogar, Professor Slogar’s work-in-progress teddy bear, after receiving the “Was wondrously well wed” modifier card from another player. Keep the stories alive, and the game, even when it slows down due to card shortages or roadblocks, remains bursting with flavor.

It’s hard to know what I love most about Gloom: the art or design of the cards. Both work hand in hand. All of the cards are transparent, which makes it so easy to see how the modifiers stack on top of a family member. Plus, they’ll survive an accidental soda spilling before all them Munchkin cards. The macabre and gloomy artwork, done by Scott Reeves, Lee Moyer, and Todd Remick, as well as heavy use of alliteration, will make many think of Edward Gorey instantly, but there’s also room for some influence from The Addams Family comics and Lemony Snicket’s A Series of Unfortunate Events. Regardless, fans of ominous Victorian horror will delight at the family member depictions, though the majority of the other cards lack personality.

I brought Gloom home-home during the holidays to play with my sisters, but we never got the chance due to all the to-and-for hubbub, charades, and Scrabble bouts. Hopefully we can make up for this over the summer so long as no one is stalked by snakes or sleepy from the sun.

Posted in artwork, board games 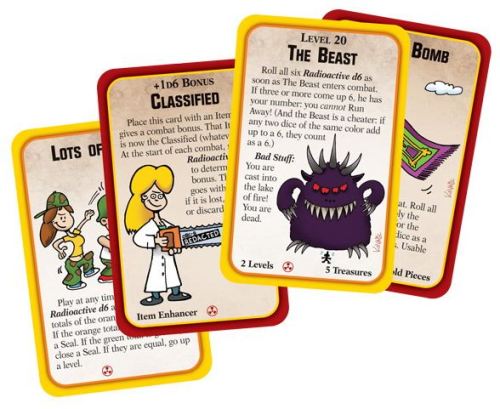