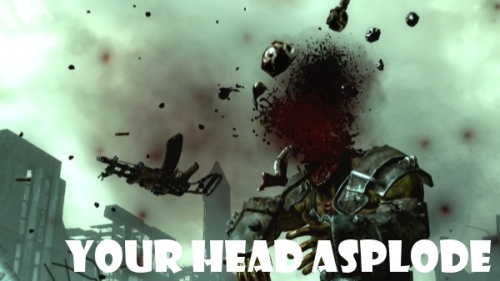 You can bet your noodle that I’ve already seen some of the leaked magazine scans containing pertinent details about Fallout: New Vegas. I’m not interested in linking to places hosting these scans, but I’m sure your Google-fu is good enough to get you going if you are that curious. I suspect over the next few weeks we’ll get official screenshots and stuff to publicly drool over. Just gotta be patient.

Anyways, here’s some tidbits that raised my eyebrows:

Yeah, it’s gonna be good, and from what I’ve gathered…funny. Now, Fallout 3 had it’s moment or two of dark, dark humor, but this time around it seems like there might even be a glimmer of silly or, dare I say, slapstick. Evidently there’s a female Super Mutant rocking some wicked shades and a stripper wig. Can’t beat that for guffaws.

But what I’m most pleased to see is that Fallout: New Vegas is using the same engine as Fallout 3. Some folks might take this as a disappointment, that the series isn’t going forward but rather standing still, but the Capital Wasteland was huge and open and completely explorable without having to drop into numerous (and/or obvious) loading zones. If the same can be done for the Mojave Desert then we’re in for a treat: another ginormous game with tons of locations and quests to suck away more hours of our lives. Ultimately, we should consider ourselves lucky.