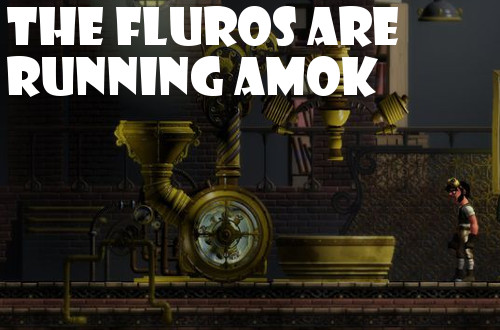 Vessel is probably a game I would have spent a ton of time on in my younger years, when videogames were scarce and my collection only grew by a title of two every few months. Now, I get free videogames to play every single day from all the various programs I’m subscribed to, plus the Internet is just full of freebies, and, frankly, it’s becoming a bit too much for my brain to keep up with. I’m not bragging; this is just reality. This ultimately means that if a game doesn’t really hook me from the start I don’t have to fret too much over walking away from it, knowing there are plenty of other fish in the ocean to eat. Sorry, Vessel, but you’re the equivalent of a monkfish in this scenario.

The main character of Vessel is M. Arkwright, an inventor who creates a liquid-composed, labor-performing automaton called the Fluro. He creates this automaton in order to perform laborious tasks more efficiently than human beings because…well, in the end, we’re all truly lazy. However, the Fluros begin to run amok and cause machinery to malfunction. In order to restore the machinery back to a functioning status, Arkwright must travel through Vessel‘s world and fix the broken parts, which more or less means solving physics-related puzzles. Expect lots of locked doors and levers and pressure plates to push.

A supply of Fluro “seeds” enables Arkwright to conjure these critters wherever he chooses. Drop one down, submerge it in water, lava, or even fruit juice, and a helper will arise, eager to assist you in solving the current puzzle. Different seeds provide Fluros of different behaviors too, as some are fixated on button pushing while others will chase you or seek out light sources. Environments often have grills through which only Fluros can pass, so much of the game involves working out where to place a Fluro so that it can run through a bunch of switches in the right order. There’s a lot of trial and error, of course, and, as with anything based on physics, not everything works as you expect it to. Sometimes the thing you control with a lever won’t stop exactly where you want it, but that’s okay.

Viewing screenshots shows that Vessel does not simply stay in the factory-esque world of the first hour or so of gameplay. Which is good, because it is both dark and boring-looking there. I almost had to turn up the brightness level on my TV to solve a puzzle. You will, in fact, get to go outside, and it’s a shame I never made it that far, as the environments look much brighter and visually stimulating than a bunch of muted machinery. Oh well, maybe next time.

Much like other puzzle platformers or puzzle-driven exploration romps, like Unmechanical: Extended and Quantum Conundrum, I played this for a bit before the puzzles became just a wee bit too much for my brain to handle. Again, there was a time in my life that I probably could sit and bang my head against the puzzles until something gave, but that time is no longer now. So, I’ll just let the Fluros continue running amok, leaving Vessel unsolved and in a state of disrepair. My bad.