I’m a big fan of free, standalone tie-in experiences, not simply because they are free. Some examples that instantly come to mind are Lost Constellation and Longest Night for the quickly upcoming Night in the Woods, the demo for Bravely Default, which contained a side-quest not available in the full release, and the Spore Creature Creator for, well, Spore. These snippets and slices offer a chance to see what the big deal is while simultaneously providing an experience not fully found in the main game. All that setup leads us to Cayne, which is an ultra-dark journey through the dystopian world of Stasis from The Brotherhood, in preparation for the studio’s next project called Beautiful Desolation.

Here’s what I know about Cayne, and, no, I haven’t yet played Stasis though that may likely change. It begins with Hadley, a mother-to-be, waking up in a strange medical facility. Unfortunately for her, this wasn’t a routine procedure and something is severely amiss. She manages to escape the operating table before her baby can be ripped from her body, only to make things worse, causing a massive, floor-destroying explosion. Now on her own, she’ll have to explore her surroundings and find out why these people were after her child, as well as make her getaway. One big problem: there’s a deadly monster-thing-with-claws called Samantha guarding the elevator.

Obviously, Cayne has style. Or, as Jeff Gerstmann likes to say, styyyyyle. It’s drawing heavily from things like Alien, as well as sci-fi short stories from decades ago, the kind that present really large ideas in tight spaces and like to pull the rug out from under you with a big twist at the end. I’m thinking of “I Have No Mouth, and I Must Scream” by Harlan Ellison and “Second Variety” by Philip K. Dick and other similar tales. As you explore the Cayne facility, you’ll gain access to PDAs, computer logs, and other characters, which offer some insights into what is happening while also keeping mum about the true motives of the company. Seems like they are into growing babies, but I never understood why and for what purpose by the end, though the ending does hint that this is a major operation, not some one-off experiment. Also, a lot of the people you meet–both living and dead–are real pieces of scum, so there’s that too.

All of this style is backed up and emphasized on through great voice acting and subtle yet effective audio tones. Hadley comes across as, I hope and assume, many of us would if we woke up in a similar situation. I like that her nervousness results in badly-timed jokes. That’s something I do too. Shortly into Cayne, Hadley “meets” a man. I say “meets” because it is more that she begins to hear a voice, and her dialogue with this person makes up a large chunk of the game, revealing many tidbits and insight into these characters. Also, the FMV sequences are pretty stellar, far more cinematic than I expected.

Something Cayne does well is minimize the amount of things you need to click on by providing descriptions of everything in text off to the side when the mouse cursor is hovered over key items in a scene. Normally, you’d click on it to get this kind of information, but now you can move through the descriptions at your own pace. I like this. The cursor also changes when over something that can be interacted with, which helps. That’s not to say the puzzles are a cakewalk; in fact, many of them are quite tricky, and I won’t deny that I ended up using a guide to figure out the ID number for the Grub Habitat, as well as how to manipulate the server platform and blow up the power generator. Other puzzles were easy to figure out, though I ended up taking a good chunk of notes just in case.

Cayne‘s biggest and most glaring fault is that…like many point-and-click adventure games, there’s a lot of backtracking involved. Generally, that’s fine. That’s part of the genre. However, a lot of games have got with the times and allowed for quicker hopping to and fro, whether through a map of locations (like in Read Only Memories) or by letting the player double-click on the exit areas to jump ahead. Cayne does not do this. Throw in the fact that our protagonist is a very pregnant woman with no shoes running around a facility with fire, broken glass, and gross puddles of ooze everywhere–well, moving through the Cayne facility is a slow burn. Real slow. I found this pace to be extremely frustrating as I was deciphering puzzles, knowing that I’d have to travel across three to four rooms just to find a piece of information and then return with my solution. It’s never a good sign when I begin reaching for my phone to kill time when moving from room to room.

Thanks to Cayne, I’ll definitely be keeping an eye on The Brotherhood and what’s next from the studio. I’m not one hundred percent in love with their gameplay mechanics and UI, but those things aren’t deal-breakers when it comes to a powerful story, believable characters in peril or up to no good, and audio design that can set your teeth on edge. You can grab a free copy of the game seemingly just about everywhere on the Internet; I played mine on Steam for those silent, delicious Achievements. 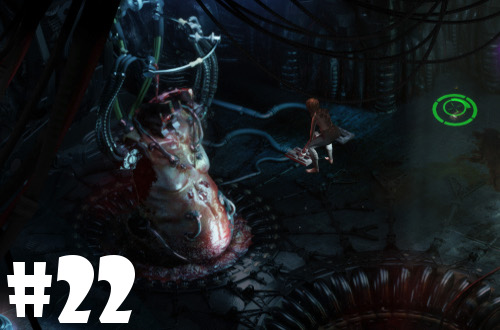 Don’t wake up, Hadley
For this is pregnancy Hell
Too much backtracking