New ways to celebrate mediocrity with The Incredibles 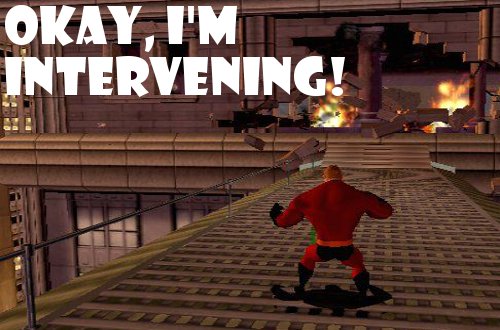 I ended up getting a copy of The Incredibles videogame for the PlayStation 2 last summer as part of a small birthday celebration for myself. Please note, I also snagged Suikoden Tactics and Star Ocean Till the End of Time with this, and, of the three, it’s the first one I’ve actually put into my system to play since that package arrived. Yup, some seven months later, I’m just blindly trusting that these used videogames from Amazon arrived in working condition. I mean, yeah, I’ll find out eventually.

Anyways, The Incredibles is my favorite Pixar film. I say that now, in 2015, with total confidence, and have been saying it since the movie saw release in 2004. Y’know, a decade ago. I also suspect that I will continue saying this for many more years, possibly all the years. There’s a lot of reasons why The Incredibles is incredible, and I’ll list a few for those in the know: Brad Bird, monologues, subsurface scattering, Syndrome’s hair, that little kid on the tricycle, capes, no capes, the colors, 1960s homages, the mysterious Mirage, and so on. It’s a funny story about superheroes, but also about family and what it can cost to stay together, to be happy. I watch it every few months as it is one of my top 31 favorite ways to eat up time.

I promise I’ll talk about the letdown that, so far, is The Incredibles on the PlayStation 2, but I first need to lay some groundwork. First, the movie. I was in college and saw it on or around its opening weekend with a girl I was dating then, who we will call the Giraffe, and it instantly blew me my mind. Like, sure, I understood the concept of a “children’s film for adults,” but here was something else, something bigger. It didn’t dumb itself down for the wee ones, and it kept the serious moments super serious. Fast forward a bit, and I’m on my way home from a Spring Break trip in Las Vegas, NV, unfortunately taking a red-eye flight back to Camden. Now, I’m already terrified of planes, and so while everyone else slept, I sat staring at the back of the seat in front of me, sweating like a pig. Until I discovered my girlfriend’s GameBoy Advance and a copy of The Incredibles for it. It didn’t pass all the hours, but it definitely helped; alas, the GBA version is quite different from those released for consoles, playing it as a straightforward side-scrolling beat-em-up, and you can see it in action over here.

I knew that The Incredibles for PlayStation 2 was not the same game I had played on that flight many years back, but it still seemed promising. The movie’s entire makeup is perfectly designed for a videogame: you have a small cast of characters, each with varying special powers, ending up in dangerous situations, all trying to save the world from a man-boy gone mad who has an army of goons and robots to toss at you. Alas, it turned out to be a vapid, uninspired retread of the movie, with an out-of-nowhere difficulty spike, which forces one to use cheat codes to get through it. Hate to remind Syndrome of this yet again, but you do need special powers to be super.

Here are my biggest problems so far with The Incredibles, and mind you, I only just completed stage 8 (of 18 total), meaning I’m a little bit over one-third of the way through it, but boy howdy I’m not thrilled about what’s to come.

It’s boring. The levels are extremely linear, and the one or two occasions it allows you to explore reveal nothing, save for maybe a single “secret bonus item” unlock collectible, which devolves into uninteresting concept art. It’s certainly no this. At this point, I’ve played as Mr. Incredible six times, once as Elastigirl, and once as Dash. Wait, real quick–the game and its manual seem to go out of its way to never refer to Elastigirl as such, calling her Helen or Mrs. Incredible only, strangely stripping her of her identity, even labeling her this in a level that takes place before she gets married. The levels for Mr. Incredible and Elastigirl are of the action adventure style, with slivers of variety, such as a turret sequence, and the Dash level was an atrocious free-runner style thing that I’ll have more on in a sec.

It’s confusing. Look, I know the movie inside and out. I have to imagine anyone coming to this game also knows the movie pretty well or would at least see it first before playing the action game based on it. If they didn’t, well…this will make zero sense. Small, condensed scenes from Pixar’s film are used between levels to bridge the gaps, but it does little to explain why so-and-so is here, doing this, wearing that. One level you are playing as an overweight Mr. Incredible in his old-timey blue costume, and the very next level you have him looking fit and all donned up in Edna’s new design. I know how he got there, but many won’t if they are relying on this for plot. Also, you rarely get told what to do in a level or where to go next, though there are only so many options at hand.

It’s too difficult. Maybe this is my fault, coming to The Incredibles and assuming it was a child-friendly beat-em-up with additional elements, but certainly something easy. Most levels, based on a quick scan of YouTube replays, take about eight to ten minutes to finish, while I was averaging more around 30 minutes. This is due to many deaths, but also frustration at overly difficult sections, sequences I just can’t imagine a young gamer getting through without repeated tries or external help. In some levels, if you miss a platform jump, you have to return to the start of the scenario yourself and start again, and it doesn’t help that the camera makes it challenging to tell how far a jump is. In that level where Dash has to race the school bus, the checkpoint systems seems oddly tiered, often working against progress. The only way I was able to beat the Omnidroid in stage 8 “Volcanic Eruption” was to spam health replenish and Incredi-move cheat codes. I don’t know, maybe I’m just terrible at games, thinks the dude that did beat Yama on a Daily Challenge last year.

The short of it is this: The Incredibles is not as incredible as the movie. I’m going to finish playing it, because that’s who I am, but like that tricycle kid hanging around the Parr’s driveway, I’ll still be waiting for something amazing to happen.