Well, the free weekend access to Gold features such as online gaming and social apps has come and gone. Mighty fast, too. Alas, between traveling and the Easter holiday, I only got to log on for one night. Boo. However, I did unlock some online-only Achievements, making good use of my time in that sense, but I would’ve liked more time to try other features. I’m still not convinced it’s worth paying for. Anyways, let’s see how I did, yah?

For Fable II, I quickly popped the game back in, earned something like 708,945 gold since I last played, and…gave a gift to a complete stranger. Ping! Didn’t really feel up to badgering people for Hero dolls though…

The Philanthropist (10G): A gift was sent to an Xbox LIVE friend. Aren’t Heroes nice people?

Then I tackled a round of deathmatch for Grand Theft Auto IV. I didn’t win or have a wonderful time, but I did manage to pop these two with ease:

Cut Your Teeth (5G): You were successfully promoted up a rank in multiplayer.

Lastly, I hit up SEGA Superstars Tennis, thinking this would be a cakewalk. It turned out to be more of an uphill climb. Online opponents are much tougher than the computer-controlled ones, always making me run left and right to hit the ball before they smacked it down hard and fast and far away from me. It took me a number of tries just to win a single ranked match, and I knew it’d be a long road ahead to winning multiple matches. Here’s what I was able to, er, achieve:

Top of the Tree (20G): Win a Tournament on Xbox LIVE

Don’t worry; I totally hate boring Achievement pics like the ones above, too.

So, in conclusion, six new Achievements unlocked for a total of 65G (not like that means anything). Not too shabby for one night of quick and rushed gaming. Until next time, free Gold access! 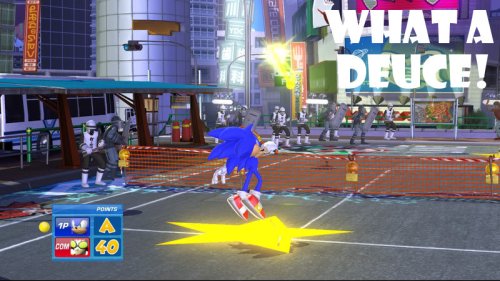 Well, let me explain a bit.

Lately, I’ve been playing a good number of what I refer to as “heavy” games. These are the often emotionally draining experiences that take hours upon hours to complete, let alone get into. Examples include BioShock, Dragon Age: Origins, and Fallout 3. In fact, I actually stopped playing BioShock for about a month because I couldn’t handle the pressure of not knowing where every enemy was and when it would attack me and omg what made that sound. Eventually I got over this, but still, it was a game I had to really be in the mood for, except at the end when I just rushed through to kill that horribly done final boss. However, sometimes I just want to mindlessly play a videogame; y’know, tap buttons until it is time to go to bed.

So I have a few of these cuts that I keep on the side to play when I need a mental breather. I’ll talk about the others later on, but for now enter…SEGA Superstars Tennis. I bought this game used for $4.99, and it’s everything I thought it would be. You play as Sonic (or select from a range of other SEGA-owned characters) and you play tennis. You can also select to not play tennis and enter a world of odd yet highly varied mini-games that will unlock music tracks and bonus levels. This is where I’ve been spending most of my time.

The mini-games all use the tennis court layout, but their objectives are all different. On the House of the Dead court, you’ll play a Space Invaders-like game, hitting zombie targets as they draw closer to you; the Jet Set Radio court puts you to the task of “tagging” graffiti; Super Monkey Ball is all about hitting balls into hoops for points, and the Puyo Puyo court involves you saving tiny critters by getting them into rockets via moving arrows. Just to name a few.

The nature of these mini-games are why SEGA Superstars Tennis is a solid videogame to play when you don’t want to play a videogame. For most of them, you barely have to do much other than hit A and steer the ball in the right direction. Get a grade of an “A” or higher and you unlock the next mission, stage, music track, and so on. It is constantly rewarding you for playing, which is effective. And some (not all) of the music tracks are really great. I’d constantly find myself trying to keep a volley session going between myself and Ulala (from Space Channel 5) just to hear the whole tune.

But yeah, for around five bucks, it’s an excellent filler between those heavy gaming sessions, one that I welcome every time. Alas, I’m almost done with every mission. Gotta look for another cheapy title to fill the void eventually.