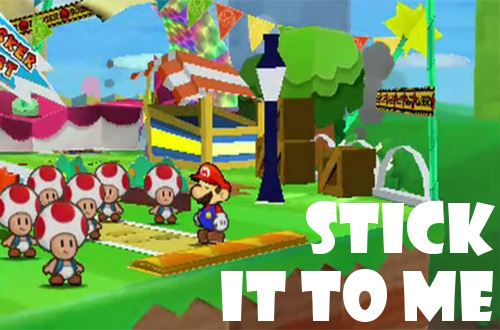 My Nintendo 3DS is getting a lot of love as of late, and I blame all these big name games coming out at once. Mostly Pokemon White 2, Professor Layton and the Miracle Mask, Epic Mickey: Power of Illusion, Scribblenauts Unlimited, Crashmo, and Paper Mario: Sticker Star. Y’know…to name a few. Today’s post will be about that last one mentioned, but I am sure to be talking about that bizarre and totally unneeded horseback chase scene from the newest Layton adventure, as well as the overall creepy 3D models. Because somebody needs to tell that world that Luke looks like he’s tripping balls, and I guess it’ll be me.

Anyways, Sticker Star. It’s a game I’ve been really excited for since it was first revealed to be coming to the 3DS. I think back then, when we knew very little about it, many thought it was just a remake of one of the older titles from the franchise, but it turned out to be its own being. Maybe a remake is still on its way though. Who really knows. Nintendo doesn’t like to give us too much information, and one can only look to the missing North American release date for Animal Crossing: New Leaf to confirm this. Regardless, it’s here, and while I waited for it to get here, I picked up and played an hour or two of Super Paper Mario for the Nintendo Wii a month or so back, which has a great look, an interesting, Fez-like mechanic that distorts the way you see a screen, but is horribly paced and far too hand-holdy. I meant to play more before Sticker Star dropped, but alas, that never happened.

Despite how bad I am in real life at peeling stickers off books or DVD cases, I’m really enjoying Sticker Star so far. A seemingly unanimous complaint about the game is that it is a much more simplified RPG, and that since battles don’t grant you much other than coins, you’re better off avoiding than fighting and “wasting” your depletable sticker collection. I haven’t felt that way yet, though there has been a few occasions where I have just jumped over an enemy instead of on it to initiate a fight. Fights consist of using a sticker for every action, and so they disappear fast, but also reappear twice as fast, as they are everywhere. You really can’t walk more than a few steps before finding one behind a bush, stuck to a wall, or within a question block. If you’re really good at timing pressing a button when you attack or block–think Costume Quest‘s battle attacks but without the prompt–you’ll save on stickers and wheel in more coins. I’m liking it all, even the inventory management aspect, which is constantly changing as a new sticker comes in or a larger sticker gets used to free up space.

The story is a story. There’s a Sticker Festival held in the Mushroom Kingdom, but then Bowser shows up and ruins it all by breaking apart the Sticker Comet, which is now scattered across various parts of the map. A magical floating crown called Kersti deems that only Mario can…blah, blah, blah. You know it from there. It exists to serve the gameplay, and that’s all–at least from what I’ve seen. However, the writing of each individual character you come across is fun and light-hearted, with a lot of wink wink and puns, so there’s potential for great story beats, but time will tell on that. Regardless, it gets you out into the world map, collecting stickers, defeating Bowser’s endless army of goons.

Whereas I found Super Paper Mario too hand-holdy from the start, the exact opposite can be said about Sticker Star, and that seems to be where a lot of gamers got frustrated. The lack of button prompts on attacks and defense stances is fine, as it teaches you how to use those stickers correctly, but a lot of sticker/puzzle solutions are hidden in the world, and to find them, you really need to experiment. The game will not tell you what to do, and if you get a hint, it is paper-thin (hey-o!). For example, there’s a part in World 1 where you need to stop water from flowing into a fountain to collect a special item. When you approach the faucet’s knob, there is no button prompt, and previous puzzles like this required the use of a specific item, such as a fan or pair of scissors. I tried paperizing the world to no effect. Then, out of ideas, I jumped on the faucet, totally just trying to hop down to the bottom part of the level, and by jumping on it, the knob turned, slowly shutting off the water. That’s not the best example, as maybe it highlights my slowness more, but it does show that not everything is spelled out for the player, harking back to an age when trial and error was how things got unstuck (hey-o x2!).

Okay, back to it tonight. I’m currently at the fortress in World 1 and trying to figure out how to stop those fans from blowing so much wind and knocking Mario off ledges. I’ll give it everything I got, and if I end up spending more than an hour trying to solve that level–well, I’ll give in and look up an answer online. If one exists, that is. The fun for me in Sticker Star really is in exploring as the colorful, diorama-esque visuals get my eyes dilating every time, but to do that one must constantly be moving forward.