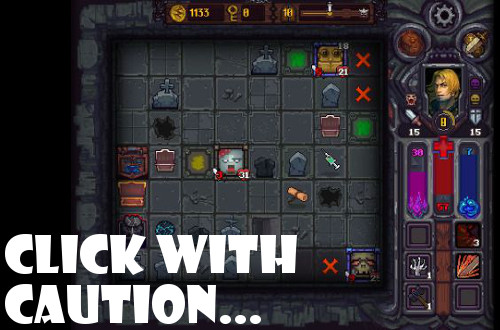 I am enjoying Runestone Keeper greatly despite it being the sort of roguelike that demands you suffer inordinately for its opening hours before you can even begin to fathom making progress. You know, like Rogue Legacy and The Binding of Isaac. Do the time before you enjoy the sublime. Not like Spelunky though. In Spelunky, you can beat the game on your very first run, so long as you know what you are doing; sure, a wee bit of luck is needed to get some specific items, like the jetpack, but it is totally doable. For other harsh roguelikes with some permanence to them in terms of upgrades and accrual, you must first grind runs one after another to begin closing the distance. I think, so far, I’ve gotten to level 9 with Guy, the only playable character available until you get further or are more successful on higher difficulties.

What is Runestone Keeper you ask silently from the other side of the screen? Well, it is a piece of interactive entertainment that came out in early 2015 from Blackfire Games. What else? It was recently part of the Humble Jumbo Bundle 7, which is where I got my Steam copy. Yeah, cool, but more specifically…what is it? Technically, Runestone Keeper is an über challenging roguelike-to-roguelite dungeon crawler that blends classic roleplaying elements and turn-based combat strategy. Kind of a weird, blood magic-driven fusion of Minesweeper and Dungeons of Dredmor.

That last description probably didn’t help all that much. Allow me to try harder. Basically, dungeon floors are randomly generated and set out as a grid that can be explored in any order from wherever you start, uncovering one tile at a time by clicking on it. Each revealed tile has an effect, even if that effect is basically nothing happens. Most discoveries include finding hearts that heal your HP, gold coins, treasure chests, traps, single-use items, weapons like readied crossbows, merchants, valuable runestones, and various pitfalls. Each tile you reveal also fills up your soul meter, which dictates your usage of certain items, as well as using in-level shrines and such. Your basic goal is to reveal enough tiles to find the staircase to the room below and head deeper into the darkness.

The real trouble with that endeavor is you’ll also reveal enemies in each dungeon level. You can avoid most fights if you want, but monsters block adjacent squares from being revealed, which are essential to finding the way to the next floor. Also, early on, you will want to fight some monsters for XP and dropped loot (which contains random prefixes and suffixes for different stats), though RNG rears its ugly head from time to time, causing you to miss your ax swings even though you are standing directly next to the angry goblin. Your attacks are obviously based on your gear, and you can quickly swap between two sets; I like having something for up close, as well as ranged enemies. Monsters hit your shield first, which absorbs a certain amount of damage before stealing away HP. The cast of enemies is quite varied, and many of them have their own unique abilities, like silencing or poisoning. Early on, your best friend as Guy, is the spell he has to lower an enemy’s attack power for a few turns though it is beyond frustrating to whiff on every sword swing during this phase.

Runestone Keeper‘s gameplay is extremely layered, even if it at times it feels unfair and driven solely by luck spirits. There’s tattoos to equip, an enchantment system, worshiping and un-worshiping deities that provide buffs and debuffs, elite arena rooms, special one-time events dictated by text choices, and more. Lots of spinning plates, and I’m sure I’m missing some elements. My focus for Guy continues to be upgrading his strength and stamina and plowing through enemies as quickly as possible while also hoarding a ton of gold coins and selling unwanted to gear; unfortunately, in the later dungeon levels, he struggles to deal with ranged enemies, as well not exploding when unearthing a ticking time bomb. It’s a problem. We’re working on it.

Similar to how I approached Rogue Legacy, Runestone Keeper is perfect for doing a couple runs, being unsuccessful, but returning to the main menu hub with enough gold coins to upgrade a permanent bonus, such as gaining more XP from killed monsters or earning more gold with each pick-up, and that leaves me feeling satisfied, feeling like I am actually inching towards a better run. I’m still hoping I’ll find that “perfect storm” run where I get some killer equipment/items early on that will help me reach level 10 of the dungeon and maybe even beyond that. If not, this is surprisingly one game I don’t mind bashing my head against the wall, desperately trying to survive or crawl to the next floor in hopes of…well, hope. Not everything has to be about being the ultimate powerhouse.