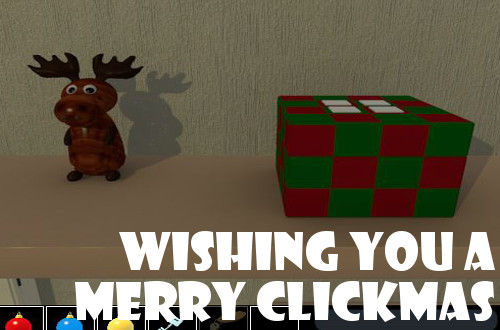 I don’t believe I’ve played any other “escape the room” games from Ichima’s Room series, which is not to be confused with The Room, a puzzle game series on mobile phones, though I’ve definitely played ones similar to the style and complexity of its logic puzzles. Such as Find 10 Yellow Cupcakes and Polar Escape. Basically, you are trapped in a confined room or house, with the main goal of getting out.

For Room 11: Xmas Tree, the tease of seeing a Christmas tree decorated with colorful balls just outside the window is enough to motivate me to make my escape and get up close and personal with it. Standing in your way are a number of obscure, locked boxes and doors. You can gather some items along the way which may help you get more items, but the bulk of puzzles require some head scratching and logic-based answers. There’s no whacky side quest to configure a key from bent chicken wire and heated up using the flaming breath of a dragon you found via a hidden hole behind the cupboard, which only revealed itself by knocking to the same tune played by a discovered music box. It’s all about seeing a pattern of numbers, colors, or symbols, and later applying to something else.

Honestly, I can think of only a handful of games that required me to take notes as I played. There was Fez, for sure. Way, way back in the day, I think I scribbled down where some treasure chests were for The Legend of Zelda: A Link to the Past, but other than that, most games give you everything you need. Especially modern titles. Need a passcode for a locked door? Pick up a scrap of paper and it’s added to your inventory of passcodes, ready to be automatically used on the door without you actually having to read it or memorize it. There was a moment in Metal Gear Solid 4: Guns of the Patriots‘s later act that asked Old Snake to remember some numbers, and I actually assumed the game would do it for me, so it surprised me when I was told to input them and didn’t actually remember; thankfully, the game moved forward nonetheless.

Well, these tiny escape games do not hold your hand. Room 11: Xmas Tree saw me jotting down everything I came in contact with that was not immediately evident. I have things like MDUDMMU and OOO8OO88O hastily written down like some madman’s manifesto, but it’s all a necessity when you are jumping from one complicated puzzle to another and can’t keep everything clear in your headspace. I figured a few out on my own, but the majority required a lot of back-and-forthing with my notebook to figure out.

I found a YouTube walkthrough of Room 11: Xmas Tree that finished the thing in just under five minutes, but it took me much longer to breathe fresh winter air. That’s because, right from the start, I simply went screen by screen, clicking on every single element until I got no more cryptic clues or Christmas ball ornaments. Then I had to begin to review my notes and figure out how each clue applied to everything else, which often would give me another item to use or more puzzle clues. I’m okay with taking my time, as adding a countdown clock or something like that would really prove too frustrating. Though a soft, soothing soundtrack, not necessarily related to Christmas, would have gone a long way here.

Think you’re up to the challenge? Well, grab a pen and notepad, then head on over here to start your deducing and click-click-clicking. 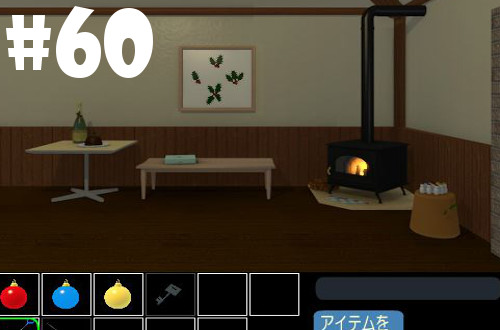 Christmas is outside
Click everything, in order
To solve, be merry