Thou hast done not well in playing Dragon Quest 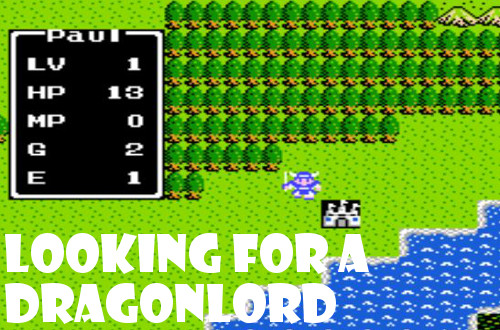 Listening to the latest Retronauts podcast, which is all about the Dragon Quest series of RPGs, I realized that my time with the franchise is actually quite limited. I’ve only played two games from the main numbered entries, specifically Dragon Quest VIII: Journey of the Cursed King and Dragon Quest IX: Sentinels of the Starry Skies, but I put a gargantuan-size of hours into each respective adventure. As you can see, I came to this Japanese roleplaying series rather late, missing out on all things Dragon Quest numbered one through seven. Anyways, I figured I needed to brush up on some history and give the original NES game a chance, to see where this all started.

Let me drop Dragon Quest‘s storyline on y’all: in the olden times, Erdrick fought demons with a mystical Ball of Light. However, the Dragonlord has recently hidden this Ball of Light, kidnapped Princess Gwaelin, destroyed the town of Hawkness, and taken over the city of Alefgard. Quite a multi-tasker. The Dragon Warrior hero is tasked with two quests: rescue Princess Gwaelin and then track down the legendary weapons and armor powerful enough to defeat this Dragonlord. Pretty simple stuff, the sort of straightforward world-saving epicness that would come to define the JRPG genre for years thereafter. Dragon Quest was also the first to combine turn-based combat, random encounters, and dynamic character leveling–all pretty groundbreaking mechanics that I certainly take for granted today.

First, you play as a descendant of Erdrick, but you can rename your character, which I immediately did to Pauly. However, the stats screen menu only has room for four characters, which brought me back down to reality as Paul. No big deal. The game wastes no time giving the hero some gold and a key and sending him out into the dangerous, monster-laden world…so long as you figure out that, to use the staircase leading out of the castle room, you must select “stairs” from the set of menu options. Yup, it’s that kind of game. Once you are out, you can speak with people for clues, search every tile possible for secrets, or start battling monsters for gold and experience points. Battles are turn-based, and your options are fight, spell, item, or run. There’s no guarantee your hit will land on the enemy, and the same can be said for their attacks, but slow-scrolling text explains everything happening in the fight.

I know that slimes are iconic to the Dragon Quest series, and now I see why–it’s all you fight for a good long while, grinding against them for money and power. They come in two variations so far: blue and red. The blue are easy to dispense of, but the red ones will cause the player grief early on, especially when you are struggling for that next level, but don’t have enough gold to stay at an inn to recover all your HP. I was hoping to see more of the classic monsters I’ve come to know, but only saw slimes and a single ghost.

I gave this about an hour. I grinded Pauly up to level 2–that sounds gross, but only out of context–which at least gave him a sporting chance against the tougher red slimes, but wandered too far away into ghost territory, where I got a massive beatdown in two turns. Thou art dead indeed, an archaic but simple message I read a few times during my short-lived spurt with Dragon Quest. Also, that first death really hurt my protagonist’s income, as dying in these games sees you losing a good chunk of your gold to be able to start again with everything else–items, experience points, etc.–still in place. I probably should’ve spent it on better armor and such before wandering out into the tall grass and mountain paths.

Perhaps I’ll tinker around some more with the original Dragon Quest, as it does seem like the sort of adventure where, so long as you keep climbing that mountain, you’ll eventually reach the top. All I need is for Pauly the warrior to be stronger than the monster in his path, and that simply requires patience and time and buying better gear. I could totally lose all the writing, however, as everybody speaks using words like thou and art and foretold. No thank you. Or perhaps I’ll dig back into Dragon Quest VIII, something I tried doing three years ago only to walk away from easily once more in favor of other stories. Also, don’t tell anyone, but I’m kind of into the idea of that Slimecraft game, especially now that I know it is set in the same war-torn land as this.