Transistor’s futuristic city Cloudbank takes a Turn() for the worse 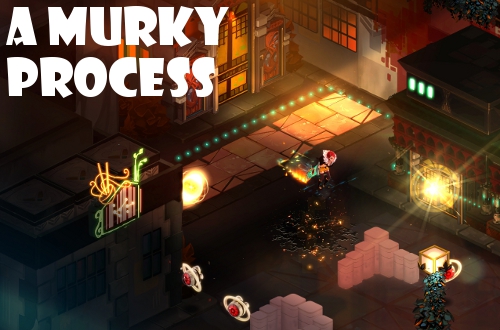 It’s been several weeks now since I played and beat Transistor, and since then I’ve come to the unfortunate conclusion that Supergiant Games’ second outing is no Bastion II. You might already have suspected that based on the look and tone of Transistor, but everything else seems to shout “same mechanics, same style, same story-telling”…alas, it is not so. That’s not to say that Transistor on its own is not a strong, enjoyable experience, but when put side by side with Bastion, a game I absolutely ate up twice and then some, it stands fully in its shadow. Let me explain some more.

One can easily summarize Transistor‘s story, but to detail it out is a much harder task. Cloudbank’s famous singer Red is, without warning, attacked by the Process, a robotic force commanded by a group called the Camerata. During the fight, she’s transported across Cloudbank and gains possession of the very sword used in her assassination attempt, the mysterious Transistor. She takes the Transistor out of the chest of a dead man, but his consciousness and voice are now a part of the Transistor itself, along with Red’s voice. As Red searches for answers, the Camerata continues to track her across the city, demanding the Transistor returned.

Now, truth be told, I got most of that from Wikipedia. If you want to know anything deeper than that, sorry…I’ve got nothing. And I played the game for a few nights in a row, my face only inches away from my struggling laptop’s screen. Alas, the writing is not as sharp and memorable here as it was in Bastion, though I loved the idea of those interactive terminals, but that air of mystery really hangs about like a damning mist, thickening and making it difficult to see where to go. I’m okay with some aspects of the story being vague, but who Red is and why she is going after these people–and who these people are and are about–well…that’s kind of important stuff and shouldn’t be buried in menus or unlocked through superfluous means. In Bastion, you have to rebuild your safe haven, and you get a big choice at the end; in Transistor, you move from one locale to another, constantly fighting, constantly taking in clouded data, and then you have a showdown with, I guess, the person behind your assassination attempt, and I won’t spoil what happens after that, but you guessed it–it’s unclear.

Okay, so I wasn’t super thrilled with how the story actually unfolded in Transistor–or didn’t unfold, if you will–but at least the combat’s interesting. And fun, sometimes. A few fights felt overwhelming and punishing, and you really don’t get a moment to breathe even though you can pause the action. It’s a mixture of real-time combat and frozen planning, referred to as Turn(). Using the latter will drain Red’s action bar, which takes some time to refill, but allows you to plan out each movement more carefully. It’s really nice that you can take as much time as you want and erase previous decisions if things don’t look sunny and bright, just like with Fallout 3‘s V.A.T.S. Red earns what appears to be set experience points after each battle and can collect new powers, known as Functions, from dead victims of the Process. You can equip up to four of these and combine them in multiple ways to create unique and different effects in battle. I played around with the Functions often, swapping in new ones and attaching others elsewhere just to see how battles changed, and there is quite a lot of variety here. I think you need New Game+ to really see everything though.

Just like with Bastion, Transistor gets its monsters right. From the paparazzi-inspired bots that take Red’s snapshot and momentarily obstruct the screen to the shockwave-creating Jerks that will plow you down if you , they are all uniquely designed and each requires special tactics in battle, which makes for some skillful juggling at times. Early on in the game, you’ll find the beach hideaway, which acts as your training grounds zone, as well as a good place to kick back, listen to some sultry jams, and watch the cyber-sun set. I did not end up completing every challenge here, but I did most of them and always visited when the chance popped up. The time-based and plan-based challenges really give you a feel for some specific combat situations, though I wish they resulted in more than just a bump of XP.

As I’m sure we all remember, music and art were a powerful combo in Bastion, and that trend continues here too. The slick, futuristic lighting of Cloudbank presents a city built on power and elitism, while the music is somber and striking, always setting a mood. At any point in the game, you can press a button and have voiceless Red hum along to whatever tune is playing; a small detail, but a powerful one. I wish one could zoom in a little closer on the battles to see some of the monsters better. Oh, and there are these strange, lightly interactive bridging sequences that really show off Jen Zee’s painting skills.

And so I beat Transistor, saw the message that I could begin playing it all over again in New Game+, and quit right away. I haven’t loaded the game back up since. It’s not that I hated my time with it, just that I feel like I experienced everything it has to offer already, and it’s not like the story is going to radically change a second time through. True, it might become clearer, but the fault is then in the cloudy writing, and it shouldn’t take two playthroughs to really grok it all. Anyways, that return romp would be mostly to try out more Function combos in combat and such, but I think I saw–and tried–plenty along the way, with Spark() probably my favorite Function.

Well, as Rucks might say, “I’ll see you in the next one.” 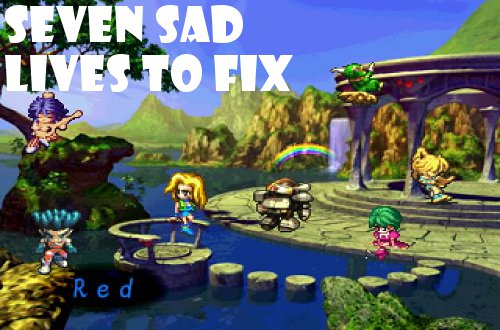 Much like the Nintendo DS, the original PlayStation played home to a swarm of strange and untraditional RPGS, such as The Legend of Dragoon and Brave Fencer Musashi. As well as SaGa Frontier, today’s topic for Grinding Down‘s games I regret parting with thing that I do from time to time. It was an era of chance and experimentation, and that’s something that I miss, because it’s notably missing from the industry today, seeing that Bravely Default: Flying Fairy has not yet been confirmed for U.S. shores (though, thankfully, Fantasy Life has).

One of the earliest posts on Grinding Down was about a PlayStation 2 game called Unlimited SaGa, which I’m positive I purchased more because it might have a connection, however slight, to SaGa Frontier than it being relatively inexpensive and a pretty looking JRPG. I tried several times to get into it, but it’s a beast of a game, snarling and growling and constantly chasing me away. I mean really–that combat wheel, the way you “navigate” through towns. Pffft. I’m sure I’ll pop it back in yet again some day, just as I will with Breath of Fire: Dragon Quarter, because there will always be a part of me that needs to understand why.

Thankfully, SaGa Frontier was a lot better than Unlimited SaGa, though it definitely had its own unique pitfalls. The aspect I remember the most about it is that you had seven different characters to pick to play, some with interweaving storylines, some all on their own. And you could pick and play them as you choose. Granted, I went with Red first each and every time, as he appeared to have the most action-driven plot of the bunch, given that he basically becomes a secret superhero within minutes of the opening cutscene. The other peeps–Emelia, Blue, Asellus, T260G, Riki, and Lute–could wait.

Coming out in the states a year or so after Final Fantasy VII, the sprites on pre-rendered backgrounds in SaGa Frontier did not look as sharp as polygonal Cloud did (at the time), but they made for interesting visuals. Especially when on the region ship “Cygnus” or in the magically dark and purple Facinaturu with Asellus. There are some really pretty vistas here, and that made exploring each character’s story a joy, as even though saw some overlapping spots, many were self-contained elsewhere. Many boss fights were your tiny sprite characters versus large suckers, which often had an insane number of Health Points.

Combat is probably the oddest part of SaGa Frontier, as a lot of it is based around randomness. Before I get to that, let’s begin with a staple of fantasy-based RPGs: Health Points (MP) and Magic Points (MP). These are bound found here, but instead of just straight MP, you now have three sub-classes of it: Waza Points (WP), which is magic points but only for weapon skills; Life Points (LP), used when a character is knocked unconscious; and Jutsu Points (JP), which is used for actual magic spells not tied to weapon skills. Whew. Got all that? Right, well, battles are turn-based, and many character skills are learned mid-battle, something I remember as being both exhilarating and confusing.

According to this lengthy GameFAQ, the SaGa series uses a rather unique leveling up system, similar to that of Final Fantasy II (Japan) in that you’ll gain what you use during combat instead of a certain amount of experience points. In SaGa Frontier, experience points are in the form of stat boosts and can either gain you a direct stat boost, such as an increase in strength, or a proficiency level. You might gain stats after every fight, but you might gain hardly anything at all. Basically, you just had to try different skills from different characters, and hope that something clicked.

To me, this was genre-shattering, and certainly nothing I had experienced so far in a roleplaying game. It’s certainly not a game for everyone, but it was more than unique, unafraid to try new ideas. Plus, with the freedom to see the game through in a number of ways, with who you wanted and at your own pace, it really felt like your own version of the plot, especially if you started with Riki or T260G. And for all that, SaGa Frontier is a game I deeply regret trading in as a young, dumb teenager.