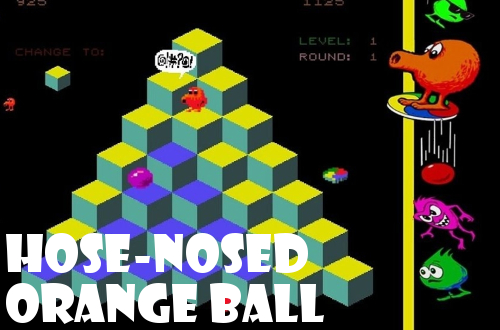 This will be a mighty big shock to some of you, but I have never played the original Q*Bert. Well, now I have, but you know what I mean. When I’d go to arcades at my local shopping mall, which is now mostly barren of any signs of life, I’d focus more on things like The Simpsons, X-MEN, and Mortal Kombat II, and even then, games like Pac-Man and Centipede seemed too retro for my blossoming tastes. Shame on me. I mean, Q*Bert isn’t some holy grail, but it does feel like a solid piece of gaming history, one that everyone should at least experience once.

Q*Bert Rebooted is a package of two games. It contains a port of the classic arcade game alongside a new playing mode that uses hexagonal shapes, increasing the number of possible movement directions to six. Woah, boy. Additionally, the rebooted mode features new enemy types, including a boxing glove that punches Q*Bert off the levels and a treasure chest that tries to avoid him as if he hasn’t showered for days. The game has five different stage designs spread across 40 levels, which contain three rounds and a bonus round for collecting gems; you have five lives to complete all four parts. Those gems can be spent to unlock different skins for the Q*Bert character, and completing levels multiple times while reaching specific time and score goals awards you with stars that enable access to more levels.

As with all early arcade games, the core concept is fairly simple. Q*Bert begins each level atop a pyramid of cube platforms from an isometric perspective. By hopping up and down and across, he changes the color of every square he touches. Your main goal is to color in all the squares; once you do, you’re off to the next stage. However, getting in the way of this goal is a variety of enemies, such as red balls that drop from the top of screen, along with a pink snake who chases after our leading orange blob. There are also non-lethal enemies that will go over squares Q*Bert has already touched, returning them to their former color. Also, you can fall off the side, losing a life, which leads me to…

I hated the controls in Q*Bert Rebooted. I would start with using the analog stick on my PlayStation 3 controller, but then occasionally switch to the directional pad. Both often resulted in me jumping off the side of a hexagon, which was never my intention. Sometimes I wanted to go left, but it would make me go left-up. I never felt super confident moving around the board. Also, the sound Q*Bert makes when plummeting to his death is beyond upsetting. Try7ing to jump on the floating discs to the side, which bring you back to the very top of the level, became a giant risk every single time.

Still, I am glad I finally got to play both the original version of Q*Bert and the rebooted one. The music is super catchy, and unlocking skins is always fun, especially when you can play with fun versions like Q*Zard and Q*1000. That said, with many arcade games, it’s not gonna stick around with me for too long. See ya down the hexagonal road, Q*Bert.