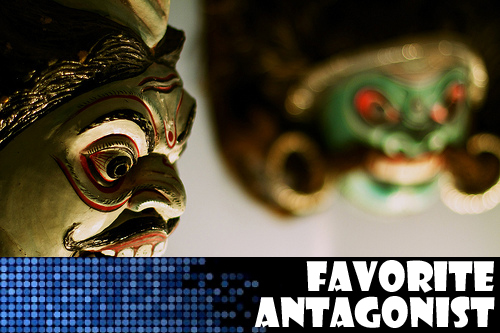 There’s a reason I didn’t just dive into the next topic train from the 30 Days of Gaming meme after the relatively easy previous two topics, and I’d like to think it’s a sound reason. Antagonists, by their very nature, are not meant to be liked. They are the reason the heroes we root for are stressing out so much, crying over dead girlfriends, striving to be a better person, or trying to save the world. Generally, videogame antagonists are one-dimensional, a single being with a single goal and a single way to get to it; this also makes them hard to like, their lack of depth. If only George R.R. Martin wrote every villain, right? Then this would be a different case indeed. SIDE NOTE: I’m doing drawings of characters from A Song of Ice and Fire.

Not every videogame has a clear antagonist. In some occasions, it’s time; on others, it’s your skill level. And that’s okay, not everybody needs to be poked and prodded forward.

I mean, there’s been a ton of antagonists that are memorable, but being remembered is not the same as being liked. Dr. Nefarious from the Ratchet & Clank series was over-the-top and goofy, but a perfect mad scientist to take down in the end. Psycho Mantis did wonders at freaking me out and telling me how many hours I’d logged in Suikoden as he battled Solid Snake. Clockwerk, a large, robotic owl, ends up doing some truly evil things. Gideon Graves gets all Dragon Ball Z-like, going from just an average dickhead to a larger-than-life threat and nearly impossible to beat. I still can’t say with authority if Final Fantasy IX‘s Kuja is a guy or a girl. Saren Arterius is a big jerkbag that released the Reaper fleet back into the galaxy in Mass Effect. Lastly, always fresh in my mind, is Koopa King Bowser, and how jumping over him or running under him–now a rather simple task–was exhilarating those first few times because he was three times Mario’s size and the little plumber that could was taking down Goliath.

Are any of them my favorite? No, never. But they’re still worth writing about, just not lovingly.