Day is night, and night is day for Pokémon Moon 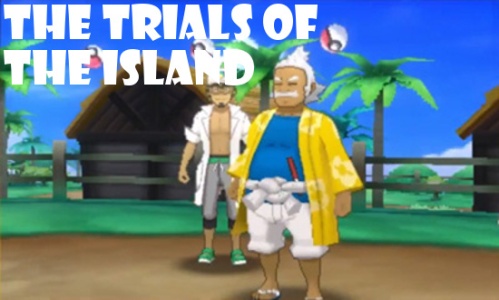 I skipped out on Pokémon Omega Ruby/Alpha Sapphire, which, like my first experience with Pokémon HeartGold, are remakes of older generation games. That’s fine, really. I’m not against remakes, considering I loved Spyro the Dragon: Reignited Trilogy and have heard many good things about Capcom’s revisit to Resident Evil 2. However, after Pokémon Y, I wasn’t interested in going backwards, but rather forwards, with the mechanics and list of pocket monsters evolving greatly and equally alongside the somewhat limited handheld graphics. Enter Pokémon Moon. Yes, moon, not Pokémon Sun. I’m Irish, and I burn easily.

Alas, I picked up Pokémon Moon around the same time that I got Disney Magical World 2. As you know by now, I ended up putting way more hours into running around Castleton than I did the Alola region, and I have a hard time pulling carts in and out of my Nintendo 3DS, preferring to leave a solid one in until I’m mostly done with it. I mean, I did start Pokémon Moon the night I got it, picked Rowlet as my starter (sorry, Litten and Popplio), handled a few other tasks, and saw enough of the opening area to confirm that, yes, this is another pretty good Pokémon entry, and I’ll get to it eventually–and when I do it’ll be a fun time.

On that note, if you’ve played one Pokémon game, you’ll probably not be knocked over by the general story in this one. Pokémon Moon has you journeying across the beautiful islands of the Alola region, encountering newly discovered Pokémon, as well as Pokémon that have taken on a new Alolan style. Your job is to keep track of all the Pokémon you’ve seen and caught with your Rotom Pokédex, which is a living, breathing record-keeper. Around every corner, your battling skills will be tested by tough Trainers, and epic battles are in store for you against Team Skull, a nefarious group of ruffians attempting to steal Pokémon. You’ll also face off against the kahunas, the tough leaders of each island. If you’re strong enough, you may reach the Battle Tree, a place where the most accomplished Trainers go to battle each other.

Sounds about the usual affair, so then…what’s different this time around in Pokémon Moon? Well, some of the Pokémon you’ll train and battle with can learn powerful new Z-Moves—moves so strong they can be used only once in battle. There are Z-Moves for every different type, as well as exclusive Z-Moves for certain Pokémon, including Eevee and Pikachu. There’s also a new Pokémon Refresh feature that can keep your Pokémon in top shape after all that battling. Here, you’ll take care of your Pokémon by curing any status conditions like poisoning and paralysis, and the more affectionate your Pokémon become toward you, the better they’ll perform in battle. Lastly, Pokémon can also enjoy a new experience known as Poké Pelago, a place for them to visit when they’ve been placed in PC Boxes. This is a group of islands where your Pokémon can explore, play, and do other fun activities, growing stronger and obtaining items for you.

Actually, the biggest difference for Pokémon Moon and Pokémon Sun is the clock. Yup, time, time, time. In addition, the two games’ clocks are set 12 hours apart from each other, with Sun operating on the standard 3DS time, and Moon 12 hours ahead. This means, when I usually play the game at night, it is actually daylight in-game…and vice versa. This does affect some of the Pokémon you’ll encounter, and I find it rather neat nonetheless.

Perhaps my favorite new feature in Pokémon Moon is that after facing off against a Pokémon once, the game automatically charts whether a move will be effective or not. No longer do I need to look up what works against what online or keep tables labeled effective or super effective in my memory. This is fantastic both for newcomers and series loyalists. I don’t care if some see it as dumbing the game down; there’s still plenty of things to dig deep into, if that’s what people like about their Pokémon games, such as breeding or finding shiny versions.

I’m playing Pokémon Moon super slowly–I mean, it’s been a few years now–and that’s perfectly fine. Every now and then I get the itch to go in, wander around, catch some new pocket monsters, and level up my team. I also enjoy dressing up my avatar in new clothes. Maybe I’ll advance the story, and maybe I won’t, content to just noodle around with all the side content and extracurricular activities. I figure this will still hold me over until I get a Nintendo Switch and have to make the difficult decision between Pokémon Sword and Pokémon Shield. Hmm. Really, it’s whatever one has Garbodor in it.