Forest of choices
PlayStation Move, controller
It’s only your hand

I was surprised when I typed Datura–the first-person exploration game from 2012, not the poisonous flowering plant–into How Long to Beat? and saw that many were completing it in under two hours. That’s great. I’m a big fan of shorter games, and yes, I’m giving you stink eyes, Dragon Age: Inquisition and Stardew Valley, for each eating up over 50 hours and not being close to completion. Ugh. For some reason, I thought this game was a really long affair with obtuse puzzles. Perhaps I was thinking of Pneuma: Breath of Life instead, though that also doesn’t seem to be an epic adventure. Instead, Datura seems to be a short affair with clunky puzzles. I polished it off in two sittings, though one could easily push through it in a single go.

Datura begins with you, whoever you are, on life support in the back of an ambulance. You are tasked with removing the cloth and wires connected to your body, which surprises the EMT helping you. This is also where the game surprised me. I mean, I knew it was a first-person exploration thing, but I didn’t realize that meant you’d see your disconnected, Addams Family-esque hand floating in front of you, moving around in a certainly unnatural manner. It’s extremely bizarre at first, but you eventually get the hang of it (I almost wrote hand of it), maneuvering it into place with the analog stick and pressing R2 to perform an action. After this, you are then transported to a mysterious forest, which serves as a hub of sorts. Here, you’ll travel incomprehensibly through time and space into different playable sequences to solve some relatively straightforward puzzles.

The game was clearly designed for the PlayStation Move controller, but I don’t have one of those. So my standard PS3 controller will have to suffice. However, this resulted in some odd, finicky control methods, with myself more or less fudging my way through some puzzle elements, like taking wooden boards off a door with a crowbar or twisting something around. There’s also a lot of tilting, which, when my controller is plugged in, is a wee difficult to do in some directions. Again, you can do it and get through it, but the whole thing reads as clumsy. Also, mashing the R2 button to “run” in the woods is annoying, especially when the speed difference between walking and running is minimal and you tire rather quickly. That said, being in the autumnal forest hub is the best part of Datura, as the atmosphere is amazing and I did enjoy finding white trees and expanding my hand-drawn map.

As far as I can tell, the purpose of each sequence is to present you and your dismembered hand with a choice. Depending on what you do, the forest itself changes to reflect your actions. Are you more sinister? Well, prepare for everything to darken and play home to flies. If you are kinder, there will be brighter areas and more butterflies. It’s a little on the nose, but wandering the woods is the most enjoyable and immersing part of Datura, so it makes a difference. I think I split the difference, being nice and being naughty. A lot of the sequences are clear in terms of what is happening then and there, but on the whole, I didn’t really understand what Datura was trying to say. I’m sure everything has meaning. Maybe this is all about the poisonous plant killing you and everything after the ambulance moment is a fever dream.

Datura wants to be a literary journey through morality. Alas, it misses the mark. The big ol’ life-changing choices are easy to make, even when it comes to issues like beating a dog to death or cutting off someone’s hand. The reason for this is that the game, while visually pretty in spots, appears goofy, and the floating hand, especially when you see it next to your other, normal hand, which is connected to an arm, has a lot to do with this. There’s no solid conclusion, save for a mirror shot at the end that shows you exactly who you are, and so this was a decent two hours in a lovely wood where the fog is thick and the leaves are endless. Man, oh man, I love autumn.

Lately, when I think about Kinect, Microsoft’s new piece of tech to power up their Xbox 360 and directly compete with the Nintendo Wii and PlayStation Move, the oil cans scene from The Jerk comes to mind. Except, instead of someone hating cans, they really hate buttons. Stay away from buttons!

I mean, really. What’s so wrong with pushing buttons?

Wait, wait, I’m getting ahead of myself here. Let’s talk about Kinect. Now, I have not experienced first hand this $150 add-on to the Xbox 360, but I’ve kept tabs on it and its plethora of games released this week, and it seems that the whole thing is rather…okay. Like, it sort of works, and when it works, it works, but other than that, this is not the spark of a revolution where gamers worldwide meet up in large fields, toss all their console controllers onto a stack of firewood, and spend the night singing hokey songs as the burdens of their past burn out a-mighty.

Right. So, Kinect is a camera, which tracks movement to turn the player into a living, breathing controller. The camera also comes with a built-in microphone to detect voice recognition. Sounds like something straight out of Minority Report. It could very well be. The point of Kinect is to introduce a new way gamers play games: hands-free. Or, rather, all about their hands. And feet. And entire body, too. You are the controller now, and you are in control. Swat at flying balls with your Xbox Live Avatar, play with pet tigers, and drive a videogame car like you would drive a real car, hands out and on the wheel.

These are all videogame tasks you could do the way it’s been for several decades, with a controller, some buttons, and thumbs. Also, sitting down. So why then is Kinect so insistent you do them without a controller? What’s so wrong with pushing buttons, anyways?

Strangely, I was never as skeptical as I am now when the Nintendo Wii came out. Sure, I didn’t really get it or fall in love with the concept, but the fact remained that, for most games, if one wanted to, one could turn the Wiimote sideways and play traditionally. I think that safety blanket was all I needed to be okay with the whole thing; and I do enjoy a couple rounds of Wii Sports, but never enough to do me in.

Back in the day, before every single game had some kind of tutorial level to teach you the basics, one had to figure out what each button did by pressing it. Hmm, how do I jump? Oh, this button. How do I run? Ahhh, hold down this one. Now, I wonder if I can run and jump for extra distance…

With Kinect, if you want your character to jump, you jump. I guess I just don’t see that as revolutionary. Or an upgrade. Pressing a button to jump is dang near a standard and, despite wonky physics at times (::ahem:: Elder Scrolls III: Morrowind ::cough::), it’s perfected as a cause/reaction happening.

I’m not here to say that controller-free gaming isn’t fun or without a purpose; I just don’t see it as better than what we have now, and I do worry that a select portion of gamers are going to be completed ignored–unless one can imagine playing an entire first-person shooter by holding an imaginary gun in our hands and pulling the imaginary trigger a thousand times over. Also, will we see an epic Kinect RPG in the future? Will there ever be a mix of things where one can play with a controller and still do Kinect-like actions, or is it gonna be all or nothing from here on out? These are important questions, and I’m not the only ones thinking about them; reviews this week have been rather mild with excitement over the tech, criticizing its space neediness and glitchy recognition, as well as the lack of depth overall in its launch titles. All of this comes at a hefty price, too–$150 to $400, depending on what one already has in stock. Others, however, seem to be enjoying Kinect Adventures and navigating the dashboard like a superbeing with a swoosh of a hand.

For as long as I can though, I’m gonna push a button. 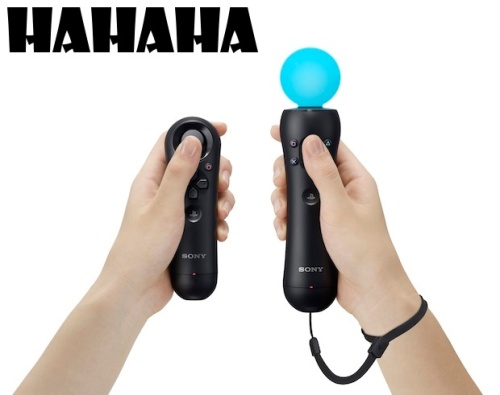 Okay, maybe not its downfall, but really, a motion controller this late in development and then so shockingly close to that of Nintendo’s Wiimote and Nunchuk…well, I just can’t see the PlayStation Move being a huge hit. The system is full of adult-oriented games from Heavy Rain to Uncharted 2 to Metal Gear Solid 4. Rarely does a more kid-friendly game release itself unto the wild, but with this new controller will come a slew of Move-heavy entries. Whether they will be gimicky or fun is for many to decide later. There’s a reported price tag of $100 for the whole kit and caboodle, which probably has no one reaching for their wallets. Ultimately, Sony has a lot of ground to make up. Not sure if this is the right path. Guess you could say they really need to move it, huh?