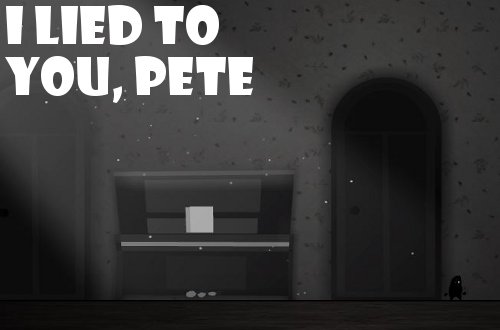 It’s interesting to see what an impact 2010’s Limbo from developer Playdead had on the gaming industry. It’s been almost five full years since the world got to take control of a young boy, wreathed in silhouette, on the hunt to find his missing sister. Since the world got to watch in horror as horror happened to this young boy for every misstep and mistake he–a.k.a. you–made. Coma doesn’t punish you in the same trial and error way as Limbo did, but it still evokes a somber, almost futile sense of dread with every jump and change of scenery. I dug it, but there’s problems. Also, questions.

What’s a coma? An extended state of unconsciousness. I’ve never been in one and hope to never experience it, but you never know what way life will go. More pertinent to the topic at hand–what’s Coma with a capital c? It’s a light exploration and adventure game by Thomas Brush, playable in your browser over at Adult Swim’s games section. Probably a bajillion other sites, too, but this is where I first stumbled across it, my new go-to site for small, bite-sized gaming experiences, like Insidia and Winnose from last year. It’s a casual platformer, with no fail state that I could find and a running time of maybe fifteen to twenty minutes, depending if you get stuck trying to figure out how to make it across that one big gap.

Coma‘s story is purposefully obtuse. You play as a tiny boy-thing, drowning in shadows. You are searching for your sister who, according to a bird-thing you befriend, is trapped in a secret basement. Along the way you’ll run into other strange critter-things who may or may not help you. There’s writing on the walls that maybe clue you in on the state of this realm and Pete’s abusive father, but again, it’s not really for the game to say. Is this boy in a coma? Is he trying to rescue his sister, who is the one in a coma? Is that big blobby queen creature a tumor? Not really sure. I both like that and don’t, as the game’s world is perhaps too ethereal and foreign to feel grounded in, so I have nowhere to even begin basing anything off of.

The controls are thus: use the arrow keys to move left and right, as well as the up arrow to jump. Personally, I’m not a fan of this, as I like my jump command to be binded to a different button than the movement keys as it can sometimes be tricky to press both in one direction and then up to leap over an obstacle. You use the mouse to advance dialogue by clicking on it. That’s it, which is more than enough for an exploratory platformer. Unfortunately, the fluidity of the jumping takes some getting used to and is not very accurate when you need it, such as jumping large gaps or from ledge to ledge. Plus, given that there is maybe one or two choices to make, dialogue should’ve scrolled automatically, with no input needed by the player.

A platformer with poor platforming controls should not be played. That’s a pretty obvious call, really. However, Coma is so gorgeous to look at and listen to that I urge everyone to push past the lackluster leaping to see the next screen, hear the next tune. I’m a sucker for fields where the grass sways and flowers bob as you brush past them, and that happens a lot here. There’s also a beautifully picturesque sequence involving a trampoline and clouds that I won’t say any more about. When Coma gets dark, it gets dark, and that’s fine, given the subject matter, but I much more preferred wandering around above ground than in the giant worm-infested darkness below.

Coma will most likely mean something different to everyone that plays it. For a short, relatively simple adventure gameplay-wise, reading a bunch of various interpretations about what Peter’s sister’s song means and the point of Mama Gomgossa’s ball game is nonetheless stimulating. Play, don’t trust the bird, and see what you see.