Paul’s Preeminent PlayStation Plus Purge – Payday: The Heist and Payday 2 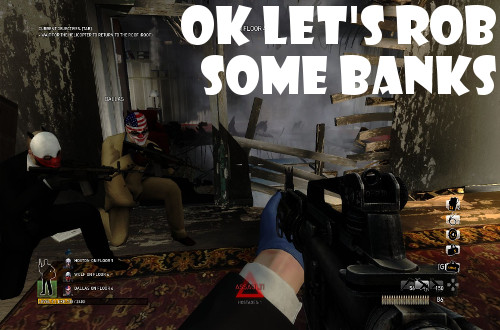 If you have Netflix, I highly recommend you check out Evil Genius: The True Story of America’s Most Diabolical Bank Heist. It’s a 2018 true crime documentary series about the murder of Brian Wells, a high-profile 2003 incident often referred to as the “collar bomb” or “pizza bomber” case. I didn’t really have a great intro planned here, seeing as I myself have never once robbed a bank or attempted to, but I am fascinated by those that put these actions into motion. I figured I’d use this time to recommend a new show for y’all to watch, as if there aren’t enough of those out there right now. Also, Reservoir Dogs.

Payday: The Heist and Payday 2 are cooperative first-person shooters developed by Overkill Software and published by Sony Online Entertainment. In them, players use a variety of firearms to complete objectives, which are usually centered around stealing a certain object, person, or a particular amount of money. This is not a run and gun ’em all down kind of game. Killing civilians is punished; players instead may take a limited number as hostages. Should any player get arrested, which happens after taking enough damage and not being revived in time, during the heist, one of their teammates may release a hostage, allowing a trade to take place. While playing the levels, players will notice a lot of variation in a single level, as there are often a large number of random events programmed in.

Payday: The Heist focuses on four robbers–Dallas, Hoxton, Chains, and Wolf. Their first heist takes place at the First World Bank, where they enter a vault by using thermite hidden on the inside of a photocopier and try to steal a large amount of money. A post-game message congratulates the group, telling them that they are “set for life,” but recommends more heists, including robbing drug junkies in an abandoned apartment complex and ambushing a prisoner transport in heavy rain weather, simply for the enjoyment of the players. Payday 2 takes place two years after the events of the previous game. A new gang comes to the Washington, D.C. area to perform another heisting spree, and you can control of one of the gang’s twenty-one members and perform heists alone or with up to three teammates.

I…was never any good at either of these two games. Trust me, I tried. However, I always felt like I was dragging down my team and never knew what step to take next. Like, for instance, when the cops show up…do I engage with them or not? I often did, because that’s the mindset in a first-person shooter–you shoot the things shooting at you so they, y’know, stop shooting at you. However, this always ended poorly. I do like the idea of a cooperative heist game, as heists in general are cool and probably the only thing I enjoyed from Grand Theft Auto V‘s main campaign, but I would need to play this with friends and talk through our plans very thoroughly before taking action. Alas, on the PlayStation 3, I have no friends, and so that will never happen. Goodbye to both of y’all.

May your next digital bank robbery go smoothly, all you fans of Payday: The Heist and Payday 2. I’m rooting for ya, truly. Also, watch Heat, one of the greatest heist films out there.