Building a bland city and not blowing up 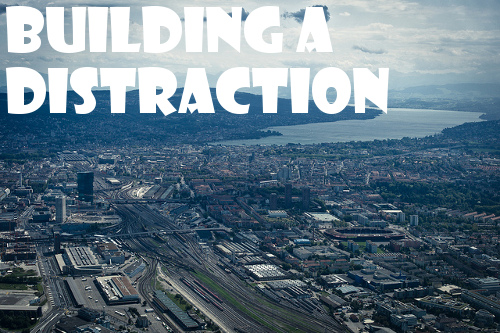 Yesterday, someone called in a bomb threat to the building I work at. Not for my company, mind you, but one of the ones we share working space with, and so a little before lunchtime hit we all had to evacuate the building. This was signaled by a blaring fire alarm, and not knowing what I know now, I just grabbed my cell phone and headed outside. I left my lunch in the fridge, as well as my Nintendo 3DS and car keys on my desk. At most, I figured we’d be back inside within fifteen minutes or so. I learned my lesson.

But then fifteen-plus cop cars showed up, and numerous officers of the law asked everyone to move away from the building. Like, not in the parking lot, but maybe in the parking lot across the street. The roadways coming in and leaving the area were closed down, and cars in the parking lot were restricted to remain there. Some people managed to drive out to freedom and a place to eat foodstuff, but others were left standing across the street, huddled like cows, chewing grass and pondering life. Myself included, except I did what I always do, going solo and finding a tree to sit under by myself while I waited this whole “fire alarm” out in general curiosity.

After a while, as we are all wont to do, I began playing around on my phone to help pass time. Or at least distract me from my grumbling stomach. An hour had passed, and no one was still allowed near the building. Flashes of my lunch in the company kitchen tortured me constantly. Now, if you didn’t know, I don’t have an amazing phone–it’s the Verizon Reality–and I’m fine with that. My phone is a device I use in emergencies to call people, as well as text my wife that I made it to work in one piece. I have two full games downloaded on it: Final Fantasy and The Sims 3. So, I played a little more Final Fantasy, grinding my team of four up a whole level, but that eventually became stale. I began looking around the shop for something new, but nothing seemed interesting or worth the price.

Until I saw a game labeled FREE. It’s called Little Big City, and it’s basically the mobile version of CityVille, a game I played diligently for a month or so, but faded away from like all Facebook games. Like FarmVille, you click on things and wait for them to finish doing what they are doing. Every action is accounted for, and when you run out of energy actions, you have to wait until the bar grows again to do more. This doesn’t take terribly long, so one is constantly tapping and seeing results. It’s not the most amazing little game, but it definitely helped distract me from the cop cars zooming back and forth by or trying to listen in on their cryptic radio chatter. I planted a lot of blueberries, built some homes, played a “match two” mini-game after raising a park, and also created some city staples, such as a flower shop and bakery. Gone are the annoying parts of having to bother real-life friends for things like construction beams or lightning bolts, as Little Big City just gives you a handful of AI neighbors to help and poke when the time calls for it.

I do, however, have a major complaint, and yes, I am going to complain about a free game, so if you’re not into that thing, well…see ya. In Little Big City, you always have something to do. A list of missions is clickable on the side, and these exist to give you guidance, as well as reward you for doing big things, like constructing a City Hall. However, if you built a City Hall before you received the mission to build a City Hall…you’re boned. You either have to build a second one–which, as a city planner, makes no sense–or bulldoze the one you already built for a measly amount of cash and rebuild to complete the mission and earn the EXP and monetary reward tied to it. It’s madness, and it happened a lot. Like, I already made six plots for farming and then immediately after was tasked with making six plots. It’s like they knew. But whatever. Not everything can be retroactive, I guess.

That said, Little Big City did the job though and kept me going until we were finally allowed back into the building–somewhen around the 2:30 pm mark–and then I had to monster my lunch in a matter of minutes and get right back to work. Next time someone threatens to blow up the building I’m working in, I’m definitely grabbing my lunch, Nintendo 3DS, and car keys before getting the bleep out of Dodge.