See the horrors of prison life with 9 Months In 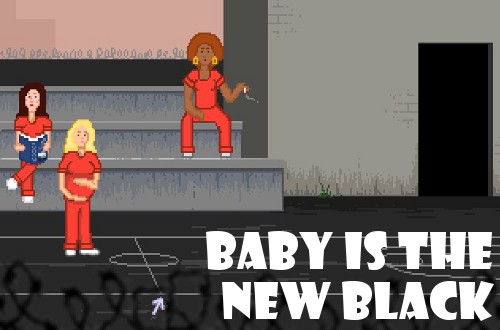 Premise-wise, 9 Months In was the point-and-click game from the AGS Bake Sale bundle that I was most interested in. See, you play as…dang, I can’t recall her name. Or even find out via the Internet because there’s not a lot of coverage for it. Maybe she never had a name, I don’t know. Let’s call her…Anna, a very much pregnant woman stuck in prison, with only a few days left until her due date. That’s not the date she’ll hit parole, but rather the date her baby will bust free from its own metaphoric jail. At the start of the game, she wakes up in her cell just like she has every other day of her sentence, except her roommate Susie is dead, strangled in her bed sometime overnight. Naturally, everyone blames her, and so she must do what she can to clear her name, and all that before her water breaks.

So yeah, that’s fantastic. No, really. I dig it. A murder mystery in jail starring your less-than-standard main character type. It’s probably something we might even see on the next season of Orange is the New Black, which is a lovely original show on Netflix starring one of the most diverse cast I’ve ever had the pleasure of watching. Here, have some fanart. Also, if what I know about prison life is true in that show, then most of these inmates should be in beige-colored uniforms, not the newbie orange. But yeah, I digress. I’d totally take this kind of plot over another “escape this bedroom” kind of adventure game any day of the week.

Unfortunately, 9 Months In, as a game, is simply mediocre–and just barely. Surprisingly, there’s voice acting, but it’s mockingly bad and stiffer than a piece of wood. Dialogue is read out loud in a stilted, expressionless tone of voice, which leaves much to the imagination, but that might’ve been more successful if there had been no VO to begin with. The puzzles are pretty easy to figure out and see from a distance, like the mop in the closet and putting something in the officer’s cup of coffee. You only pick up a limited number of items, and there’s really only so many rooms you can explore in a locked facility. There’s also a big problem with the speed of Anna’s walking, which is glacier-like, and you can’t double-click to skip to the next room, a feature that newer adventure games are spoiling me with. Moving from the basketball court to the showers feels like a literal journey.

Choices matter, and that’s why pregnant Anna is in jail. And choices continue to matter in 9 Months In, as there are multiple endings to the game based on the decisions you’ve been making along the way. A score counter in the top corner of the UI lets you know how close you are to getting 100 out of 100, which I assume is the good ending. Alas, I completed the game somewhere around 87, which resulted in a conclusion felt rushed in order to finish the game in time for promotion. The story’s resolution, through bad voicework and unclear writing, left me wanting more. A solid explanation. Anything. At least a nice song plays during the credits, but otherwise, this was just okay.

So yeah, a bit of a bummer. 9 Months In sounded really cool, but doesn’t do its subject material justice. Guess I just need to hold out hope for an OITNB adventure game Kickstarter.