That’s right. More colors for the Nintendo DSi. And it only took the world a hundred years to give us a Mario pipe-green one. I mean, I thought that was a no-brainer, but maybe that’s just me. Green’s also the best color ever to be a color, and everything should be green, Nintendo DS consoles especially. People, too. Insert your own Soylent Green is people joke!

Well, now we have one. A green Nintendo DSi, that is. It’s debuting this Black Friday, but it’s probably only available in limited numbers. First come, first gobble up. Also, the bundle comes packaged with a free game (Mario Party DS) for the price of just a standalone DSi–about $149.99. Cool, cool. If Tara and I didn’t already own fine and dandy DS Lites (mine’s black, hers is black and blue), I’d totally spring for this. But, alas, currently, there is no need in my life for a third DS system, even if it is an upgrade so-to-speak with its nifty camera and slightly bigger bod. Might just wait this whole crazy ride out until the 3DS drops and see how that floats or flops. I totally didn’t mean to rhyme there.

Anyways, check out Nintendo’s newest baby in all its beautiful, green glory below: 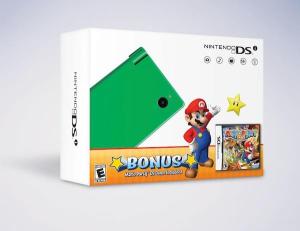 Oh, and there’s also an orange one available…but who cares about that color. 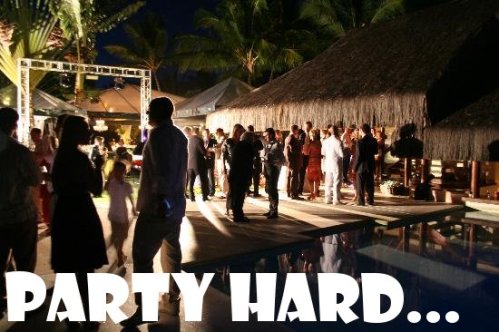 I had it all planned out.

My car, Bullet, is due for inspection this month of August. It’s very first inspection, actually, and since the beginning of the spring I’ve noticed my steering wheel shaking a lot when I’d tap the brakes after doing 50 mph or higher. Kinda scary, most likely an attribute that could get Bullet failed. So I decided to bring it over to the mall and drop it off for some maintenance work. No biggie, because this was also the day that Nintendo-sponsored Dragon Quest IX event parties were happening nationwide in GameStops high and low. I’d just bring my DS with me and kill some time that way…while also grabbing a rare treasure map. That’s all I cared about; sorry fellow DQIXers, but I don’t want to go co-op questing with you.

So, the event, which I only knew about from the Internet and even then knew very little about it, was to start at 12 and go to about 4:00 in the afternoon. I had about an hour or so to blah-blah away so I went into the mall, found a comfy couch, and sat down to grind for XP and alchemy items. I must have been playing for about 30 minutes before I looked up and to my left. This is what I saw:

I laughed out loud. The old lady across from me sneered.

Noon hit, I entered Tag Mode and put my DS in my pocket, and then shuffled over to the nearest GameStop, hoping to pick up the map or tag some random adventurers and then get out quick. There was no one in the store. I felt kind of odd just going up and down the aisles. Eventually, I left, returned to the couch, and checked my DS to see how much awesomeness I had downloaded: 0%. Ouch.

Tara and her mom were coming back past the mall after doing her wedding gown fitting at David’s Bridal so we all had lunch together. I nom nommed on a Subway sandwich and also heard back from the car place; my drum rotor needed fixing and it would probably be completed by 3:00. Tara’s mom left to head home, and then Tara and I took a walk around the mall, eventually heading back to that GameStop from before (note: this mall has two GameStops, one on the first floor and one on the second floor, and it seems a bit overdone if you ask me). I asked the guy behind the counter if they were participating in the Dragon Quest IX meet-up party event thing, and his expression showed pure confusion. He had no idea. Looking up stuff online, which took a bit because they don’t actually have full Internet browsers there, he learned that the GameStop outside the mall and down by Walmart was the one hosting an event. Ah…okay.

I figured if I didn’t get there and get the silly little map then no biggie. It’s just a game. Tara and I then headed over to PetSmart (or is it PetsMart?) because they were having an adoption day. So many adorable dogs and cats, and if I had the room and time and money to care for them, I’d catch adopt ’em all. Then we hit up Target for a bit, finally making our way back to Sears to see how my car was doing; it was done, almost exactly at 3:00, as if magic was at work.

Sheepishly, I asked my fiancée something like this, “Can we just stop real quick at the other GameStop so I can get this DQ map? I’m sorry you’re marrying a little boy.”

She said yes. It has to be clear why I love her so much, right?

This GameStop was much more active, and it was obvious from stepping inside that an event of some sort was happening. I entered Tag Mode in my car before coming in, and as soon as I checked it I saw I had canvassed a guest named NOA1. A Nintendo rep in a blue slime shirt came over, explained what to do next after bringing in NOA1 to my inn, and chatted a bit about the event so far. He said some kids came in earlier with all LV 99 characters; my LV 26 Hadwynnn openly weeped. After getting the treasure map, the rep gave me a poster and some stickers. Tara and I left after that because, as I mentioned before, I was just there for the map and not really to socialize, but it looked like there was plenty of that going on already.

So yeah, it had some hiccups, but the event worked out pretty well. I know DQIX is a much harder sell here in the United States than in Japan, but I think these weekly events can only do good for the game. Next week, there’s one at Best Buys around the country. We’ll see if I can make it to that one, too…

Oh, and that rare treasure map? It’s basically an epic boss fight, and this boss wiped out my entire party in two turns. Don’t think I’m ready for it just yet. Maybe I never will be. But I’m glad to have it in my collection nonetheless.

Man, Japan just has the best Nintendo DS colors. And now they are getting three more: green, blue, and yellow. Try not to compare them to three easy-to-guess Pokemon. But still, the green one, with its black trim, looks fantastic. Alas, I have no reason to need another handheld, and I just picked up a DS Lite for Tara for her graduation. It’s the cobalt blue one, which, honestly, is okay and certainly the best of the bunch, but not the greatest color scheme under the sun. So, uh, yeah. Japan. Hurry on up and ship these across the sea. Maybe by the time they get here, I’ll have a reason to upgrade to a DSi XL. Most likely not, given the behemoth’s size, but stranger things have happened…