Gnoming the Minnesota countryside for more answers in Puzzle Agent 2

Look, I think Telltale Games really messed up in how they presented Nelson Tethers: Puzzle Agent and Puzzle Agent 2 to adventure and puzzle fans worldwide. They are not two separate games, but rather one cohesive story broken right down the middle, with some faux resolution to make one feel like they finished something when in reality, all they did was open the floodgates for further answers. Answers that would have to wait for a second go-around. If we could travel back in time and I could get a job at Telltale and confidently speak up during one of those early brainstorming meetings, I’d rename them as so: Puzzle Agent, Act 1 “Acer Eraser Chaser” and Puzzle Agent, Act 2 “Gnome Man’s Land”. You’re welcome, everyone.

But really, that’s just me being picky over the fact that these are clearly meant to be played together. One, then the other. I mean, I have no idea how anyone could play Puzzle Agent 2 and not have experienced the story from the first game and still understand what is happening in this dark, disturbing tale of disillusionment and dementia. Everything is connected, and nothing is hamfistedly explained for the player a second time round. You either know who Isaac Davner is or you don’t. It’d be like if the first act of Broken Age had been released with the full implication that it was, for lack of a better way to put it, a complete and finished product. People would have gone bananas-infused crazy if that had been the case, but granted, from what I can tell, the two Puzzle Agent games are small fish in the big adventure games pond. And what a shame that is.

Puzzle Agent 2 is more or less the very same game as Nelson Tethers: Puzzle Agent, with one pretty key difference between the two: difficulty. In the original game, I found many of the logic puzzles to be absolutely mind-hurting and found myself looking up answers online even after I used all three possible pieces of hint gum. It’s no fun getting stuck on a puzzle in these kind of games because it basically means you can’t see any more, and I felt like the majority of the puzzles were just too obtuse or unfair, though maybe the later Professor Layton games really softened me up. That said, I looked up maybe two to three puzzle solutions at most in Puzzle Agent 2, finding many of them almost ridiculously easy and simple. Guess you can’t have your cake and eat it too.

The strange story of a shutdown erasers factory and the Hidden People whispering in the woods continues on and on in Puzzle Agent 2, with Nelson Tethers returning to Scoggins, Minnesota to finish what he started. Alas, he has to use up all his vacation days to do so as the FBI believes everything is cleared up. Immediately upon arriving, Nelson feels unwelcome and receives a mysterious note that highlights the fact that many others have gone missing, not just Davner. Your first step is figuring out who, in what order, and why. Naturally, you’ll do this by talking to locals, running down dialogue options, and solving puzzles. It’s quite perfunctory and by the numbers, but it’s also really great and entrancing thanks to the tone, delivery of the voice acting, and Graham Annable’s unsettling art style. Seriously, there’s some fantastic dialogue here, especially between Nelson and newcomer (and potential love interest) Korka, and even more fun-to-watch cutscenes thanks to a bump in the animation department.

However, there was one puzzle that really disappointed me. It’s one of the final puzzles in the game, where Nelson is running from some people and trying to find a thingy. I believe the instructions were telling me to draw lines from certain floating items in a specific order to help keep Nelson focused on the task, but I failed every time, and this is one of the rare puzzles where you are being timed and have to act fast. I felt very confused from the word go, and I blame the instructions, as they weren’t very clear. I had completed all the other puzzles up to that point, so it was frustrating to see one slip by, especially that close to the credits.

This time, thankfully, when Puzzle Agent 2 ends, it ends. Though there is a postcard-size hint that maybe a third adventure, one not set in Scoggins, could happen down the line, but given that Telltale Games is now working on four episodic adventure games series concurrently…I doubt anyone is really pushing for more Nelson Tethers action. I mean besides me. Let me know if I’m not alone in this. Heck, if a potato salad can see rise to a great Kickstarter, why not Puzzle Agent 3: The Bermuda Bummers? Let’s do this. 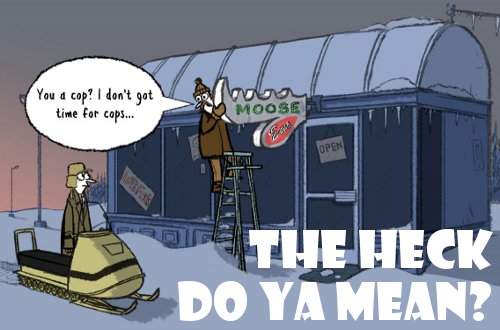 I think Fargo is a really great movie; I remember the first time I saw it, some ironically cold, wintery night in my freshman year of college, on one of those many weekends my roommate went home to see his parents and friends and left me to my lonesome–which, in the grand scheme of things, was perfectly fine by me. We were not meant to be. I had the lights off, the volume up, and my eyes glued to the screen. It’s a humble movie about small people committing big crimes, all for, to quote Marge Gunderson, “a little bit of money.” So far, I’ve seen the first episode of the Fargo TV show and really liked it, so here’s hoping it comes to Netflix down the line.

Anyways, that intro paragraph exists because I played a bit of Nelson Tethers: Puzzle Agent last night, which clearly takes inspiration from Joel and Ethan Coen’s 1996 cult American crime flick. Both are set in Minnesota, and both rely heavily on accents and smallfolk quirks to sell the setting’s personality. Granted, one deals with murder and kidnapping, and the other an accident at an erasers factory, so there are some slight differences in tone, but a mystery must be investigated nonetheless. Which brings us to the titular Nelson Tethers, who works for the Puzzle Research Division of the FBI; this is his first field assignment, and he’s humble enough to really want to do a good, thorough job, impress the higher-ups. As soon as he arrives, Tethers begins to see that this quiet, snowy town has a few extra secrets slinking in the shadows.

Puzzle Agent is a puzzle-driven adventure game in the same vein as the Professor Layton series. There’s a story at play, but to see it unfold, you’ll have to solve seemingly random puzzles–though some are definitely more themed for the plot than others–and these range from jigsaws to answering a question based on a specific set of rules. I think I even ran across a “bug grouping” puzzle that I also recently found in Professor Layton and the Azran Legacy, which I need to get back to sooner than later. You can collect pieces of chewed-up gum (gross), which act as hints for puzzles, and naturally, you get rated for how many hints you used and how many wrong answers you submitted. Other than that, you’ll question people via your trusty notepad of topics á la L.A. Noire and examine scenes, though there is no inventory to manage.

Visually, Puzzle Agent is a delight. It has this wonderful art style from the creator of Grickle Graham Annable, which is a really cartoony look, and you can see it so when the cutscenes zoom in on characters and you can make out the pencil lead in their outlines. As an artist, I dig this, though I get why some might not. Environments are detailed where it matters so far, and the illustrations for the puzzles get the job done. Speaking of that, when you submit an answer, you get this fantastic animation of your solution being zipped off to HQ for review, as well as a ticking number tallying up how much taxpayer dollars you are spending on this. It’s probably the slickest element of the entire game’s presentation, and yes, the character animation is meant to be so rudimentary. It’s for effect.

Not to keep comparing it to Professor Layton, but that series is really the pinnacle of puzzle-based adventures, and so there are a few things I wish Puzzle Agent did more like them. For starters, often, the text for the rules or question you are trying to solve is found in a sub-menu, meaning you have to constantly keep clicking back over to remember what your goal is, whereas the Professor Layton games, mind you, they are on a system designed with dual screens, keeps the information right in front of you at all times so you can read and solve in unison. Secondly, the game will not auto-complete a puzzle if you find the right solution; you have to hit submit to see it through, which has already lead to me second-guessing a few choices here and there.

Alas, I kind of spoiled a little bit of the game as I went searching for a good image to use on this blog post, but regardless, I’m still excited to see how everything plays out in Scoggins, Minnesota. I don’t think it’s a very long game, so maybe I’ll finish it over another sitting or two. What’s even better is that I apparently also have a copy of Puzzle Agent 2 on Steam, waiting for me immediately after. I guess I got both of these through a bundle at some point, but have no memory of such a purchase. Or maybe I bought them in a fever-driven state of consciousness. Hmm. Let’s just end on another Marge quote: “I’m not sure I agree with you a hundred percent on your police work, there, Lou.”