Nancy Drew and the Mystery of a Terrible Game

Recently, I borrowed two DS games from my mother’s collection: Hidden Mysteries Titanic: Secrets of the Fateful Voyage and Nancy Drew: The Mystery of the Clue Bender Society. Both have extremely long titles, and both are terrible abominations that I can’t believe got made and stocked at full price. Anyways, I breezed uninterestedly through the former-mentioned title, but got stuck with Nancy Drew and eventually just gave it back unfinished. Mom plans to trade them in for pennies and nickels. 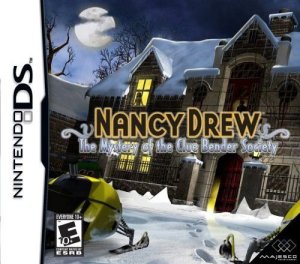 Still, I have thoughts. Most of these end with question marks, such as “Why couldn’t they give a clearer hint here?” or “Is Nancy Drew really a complete fool?” or “What’s up with that one dude’s beard?”

Nancy Drew: The Mystery of the Clue Bender Society is evidently the second outing for the young, teenbop sleuth. I missed the first one…thankfully. In this one, she gets a mysterious letter from the shadowy Clue Bender Society, inviting her over for a visit to join their awesome club of super-detectives. Or something like that. Once there, Drew must find a stolen tome that may or may not contain crazy cult secrets powerful enough to destroy the world. I know, pretty heavy stuff there for a Valley Girl who is more at home when finding her lost cell phone.

Generally speaking, it’s a puzzle game. You might be inclined to say the game has puzzles, emphasis on the s. But it doesn’t really. The puzzles are just minigames: time-wasters, space-fillers, extra screens to tap at furiously, call ’em what you will. These minigames don’t even give you basic instructions; you’re thrown into the lion’s den and must tap your way out. Ultimately, there’s very little, hmm, clue bending in Nancy Drew: The Mystery of the Clue Bender Society.

And the writing…sigh. Having known them to be quite popular, but never reading much of Nancy Drew’s adventures, I expected a solid story with a whodunnit mystery. The writing, right from the get-go, is a trainwreck. Like, derailed and then flipped and then exploded and then anything that didn’t explode melted like that one dude’s face in Indiana Jones and the Raiders of the Lost Ark. My favorite “writing” moment (quick, turn on your sarcasm meters!) is when Nancy is meeting a friend in a local cafe. The friend gives her a device to pick up fingerprints and tells her to try it out on her coffee cup; Nancy does and then is extremely shocked and surprised to find her friend’s fingerprints on the mug. Like, oh my gawd! What…an…idiot. I almost want to know what Nancy’s SAT scores look like and if they are just a wee higher than my last bowling record. 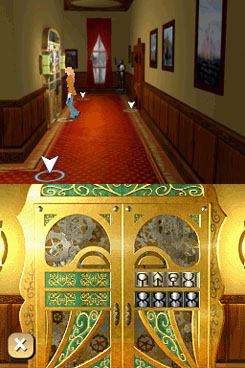 But there’s no guidance within the game. I’m not talking guided hand-holding, but there could’ve been more hints as to what to do next. Alas, a lot of time is spent going back and forth from room to room in the mansion, hoping you’ll find something new to click on to set things in motion again. You’ll get a bunch of items you may or may not use (e.g., her cell phone). And there’s an unneeded amount of rooms that have nothing in them. Unfortunately, I got stuck on a part of the mansion where every room offered nothing new, and I had no idea what to do next. My quest instructions said, “Find the tome.”

And now she never will. Oh well. Guess then it’s goodbye, world. 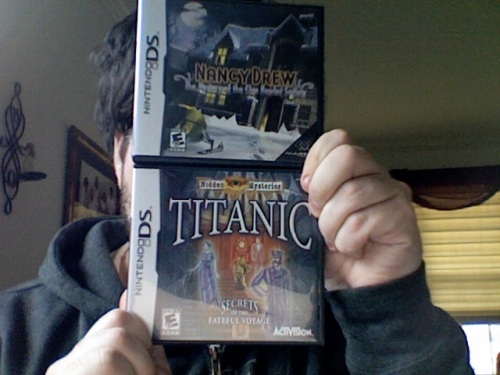 I’m visiting my family for the weekend, and that means checking out my mother’s DS collection while home. Now, we’re two completely different DS gamers; I like the big name, mainstream action/RPG games like The Legend of Zelda: Spirit Tracks and Scribblenauts, and she’s very heavy into the puzzle/mystery games. I’ve played some of them, and they each have their highs and lows. Zenses Ocean is nothing more than a small collection of uninspired mini-games, but Mystery Case Files: MillionHeir, while formulaic, was actually a lot of fun. You found things, you played a mini-game, and then you went back to finding things. I dunno, I guess I’m a sucker for hidden item pictures…it’s been an ongoing love, which started by reading the comics section of the newspaper every Sunday morning.

Anyways, my mother’s stuck on two of her newly purchased DS games and rather than plow through them, she’s just giving them to me. Cool, cool. Alas, I’ve never heard of them: Titanic: Secrets of the Fateful Voyage and Nancy Drew: The Mystery of the Clue Bender Society. The former title says, “Feel the ship deck creek as you search for hidden objects, decode secret puzzles and solve the greatest sea mystery ever.” Pretty sure the ship sinks. Mystery solved!

Also, it actually says “creek” on it: 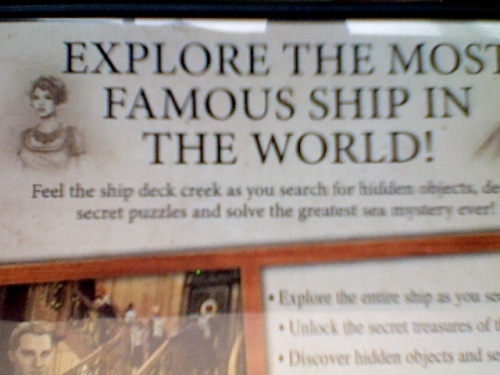 Apologies for the crappy quality. But, uh, Activision…I’m available for copy editing!