I now have two versions of the same named game 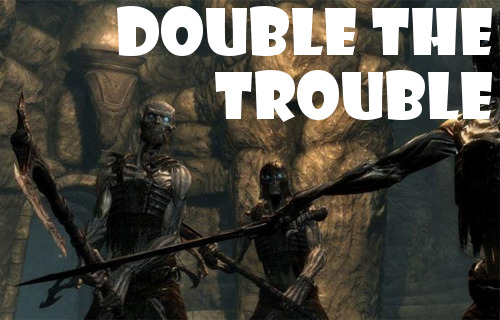 Last night, after some extensive Googling and checking of system specs, I purchased The Elder Scrolls V: Skyrim…for the second time. See, I already own a copy for the Xbox 360–even waited in line at my local GameStop for its midnight release back on that magical 11/11/11–but the Internet was all abuzz about the Creation Kit, which is the PC version’s modding toolset, and Steam was even going so far to knock the price down for the full game version from $60 to $40. Well, it seemed like my ASUS laptop could handle the beast, maybe not at its greatest settings, and so I plunked down my e-cash and drew some comics while I waited for the epic file to download.

And it works. And it works with an Xbox 360 controller plugged into the USB slot. And I can read ALL of the text. I’ve been playing Skyrim for so long as an illiterate Dovahkiin, and now I can actually enjoy those numerous books and bits of flavor text via quest progression. Let them shout it from the mountain. Plus, with the Creation Kit being tied to Steam, it seems like installing mods will be easy peasy. I haven’t tried anything just yet, but I will. There’s an arrowsmithing one that looks kinda neat; one could always use more glass arrows.

Let me just state that this is far from my usual routine. Generally, I have only one version of a videogame. Thinking on this, I can’t come up with many doubles in my collection. Between Tara and I, we have some Mario SNES carts and then them doubled on the Wii red box collection thingy. Two copies of Chrono Cross. From buying a few indie game bundles, I have duplicates ready for downloading. Other than that, um…nope. Just Skyrim. Go big or go home. But the promise of mods and the fulfillment of being able to read text has made getting a second copy of Skyrim worth it. Looking forward to diving back in…on medium or low settings. I have to wonder if there’s a way to bring my saves/character from the Xbox 360 over to Steam?