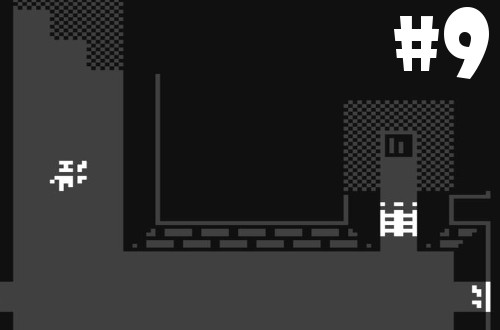 Light your way through dark
Find a stranger, a way out
Short journey upwards

And we’re back with these little haikus  of mine. Go on, gobble ’em up. However, if you want to read more of my in-depth thoughts about these games that I’m beating, just search for them by name on Grinding Down. As always, enjoy my videogamey take on Japanese poetry, even if they aren’t instant classics, such as the works of Matsuo Basho, Yosa Buson, or Kobayashi Issa. Hey, not everyone gets to be that great.

POLISHING OFF: The Unfinished Swan

After polishing off Kung Fu Rabbit, I did another quick scan of the items closer to the top of my long, never not growing list of PlayStation Plus titles on the ol’ PlayStation 3, which still, to this day, probably gets the least attention from me. Yup, even my Wii U sees more turning on…granted, that’s mostly for Netflix in bed, but whatevs. I stopped on The Unfinished Swan, which, with its very name alone, demanded I jump back in, balls of paint at the ready, and complete whatever was left to complete. Turns out, not all that much.

It’s weird to realize that The Unfinished Swan is a game I totally played earlier this year, but them’s the facts. By the time credits had rolled, I had done a majority of everything there was to do, save for find all the collectibles, which in this game took the form as balloons hidden in the environment, and launch a blueprint box in the air at two different amounts of height. Anyways, to get those last ones, you first need to find all the balloons, as doing that then gives you access to the sniper rifle–calm down, Call of Duty players, it still only shoots paint and only for non-violent reasons–which helps to knock tossed items higher into the sky.

Honestly, the gathering up of balloons wasn’t as bad as I might have expected. I must have gotten a good chunk of them on my initial playthrough. However, maybe you are like me though–and if so, I’m sorry–and the thought of replaying entire sections of levels you just played to get a specific item or two can seem like too much or not a big barrel of fun, considering it isn’t anything fresh or unexpected. That said, with the help of the “balloon radar,” which fills up as you get closer to a collectible, it wasn’t too bad to find the remainder, except for the levels at the end of the game, which are dark and shrouded in shadows and spiders that only want to hurt you. At one point, I knew a balloon was somewhere nearby, but I had little light at my side and just started tossing paint balls left and right, eventually hitting it–talk about a shot in the dark.

After all that, I took one look at “Minimalist,” a Trophy asking the player to reach the Watchtower from the game’s opening level without throwing more than three paint balls, and an even harder look at a text walkthrough of how to do exactly that before deciding “no thanks” and uninstalled The Unfinished Swan from my PlayStation 3’s hard drive. To me, this swan was more than finished.

Completing a game doesn’t often mean finishing everything there is to do. For many games, long after I’ve given them a haiku review and post of final thoughts, there are still collectibles to find, side quests to complete, things to unlock, challenges to master, and so on. POLISHING OFF is a new regular feature where I dive into these checklist items in hope of finishing the game as fully as possible so that I can then move on to the one hundred and thirty-eight million other games begging for my attention.