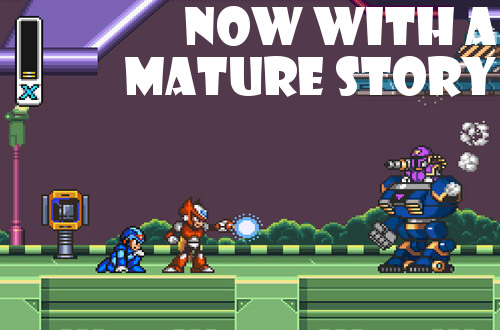 Mega Man X, as far as I can remember, is the only game in Capcom’s long-running and blaster-charging run-and-jump action series where an innocent-looking robot boy obliterates rogue worker automatons that I’ve beaten. Granted, I haven’t actually played all that many, and that’s mostly because they are challenging gauntlet runs that punish more than they reward. Still, back when I was younger and only had so many games to play and few IRL distractions, practice made for better attempts, and I eventually saw credits roll on Rockman’s first appearance on the Super NES. I absolutely know that getting all the capsule upgrades played a big part in this accomplishment. Without them, I probably wouldn’t have gotten past Chill Penguin. Sick frost burn.

Do you know Mega Man X‘s somewhat maturer plot? If you do, congrats. You can skip ahead two paragraphs. If not, allow me to summarize. Dr. Light created Mega Man X, commonly known as just X, years after the original Mega Man series, with a key difference: the ability to make his own decisions. However, Dr. Light was not completely blind and thus recognized the potential danger of this model, sealing X away in a diagnostic capsule for over 30 years of testing. X’s capsule was uncovered by an archaeologist named Dr. Cain almost a hundred years later. Excited by the possibilities X presented, Dr. Cain disregarded Dr. Light’s notes and warnings and created a legion of new robots that replicated X’s free will–Reploids.

Mega Man X introduced a lot of new elements to the series. Like the Central Highway Stage, which is basically a tutorial level that allows players to get a feel for the game before setting out to stop the usual kill list of eight named bosses. It is in this level you are first taught how to dash along the ground, cling to walls, and wall jump, as well as dashing and jumping simultaneously, increasing X’s speed in the air. These modifications give X far more mobility than in previous games, which, often required precious timing and accuracy, especially when trying to jump from vanishing platform to vanishing platform. I don’t remember if I played Super Metroid before or after Mega Man X, but the wall-jumping is much easier to nail in the latter.

Besides gaining new weapons after kicking the metal butts of every robot leader, X is also able to upgrade parts of his armor, such as his helmet, boots, arm cannon, and chestplate. These are found in hidden capsules, and they are, as far as I can recall, fairly well hidden, save for the first one, which you have to stumble across for story purposes. X can also charge up the weapons he takes from defeated bosses, giving him a secondary fire mode. More options equals more fun, and some levels even feature alternate paths. Also, completing certain stages ahead of others will subtly affect the battlefield. For example, if you clear Storm Eagle’s aircraft carrier stage first, Spark Mandrill’s power plant stage will suffer from electrical outages.

And now, for everyone’s enjoyment, a list of the bosses in Mega Man X, which, at the time of its release, I thought were beyond cool, but now see that as simply uneducated madness:

Actually, I still think Launch Octopus is pretty killer. We can blame that on Kojima and Decoy Octopus, I guess. Pretty much any combination of [cool word] plus octopus sounds fantastic. Like Fugazi Octopus. Or Mozzarella Sticks Octopus. See–works every time.

Giant Bomb is currently working their way through the Mega Man games with their premium video series Blue Bombin’, and I’m not sure if they’ll be playing the Mega Man X series of games, but here’s hoping they at least give the first one a chance as it certainly switched some things up for the little blue boy who could. I’ll always remember it fondly and wonder why on Earth I thought it was a good idea to give away this classic SNES cartridge (plus original packaging and manual) for a few measly bucks towards an original PlayStation 1. Sigh.