Achievements of the Week – The One Step Ahead Decapathon Champion Edition

Last week, I promised more variety in the Achievements I unlocked for this week, and–surprise, surprise–I actually came through and unlocked a bunch in three completely different videogames. Go me. No, really. Slap me friendly on the back because sometimes, and I don’t really understand this, it appears nearly impossible in my mind to switch out game discs inside my Xbox 360. Like I’m kicking one kid to the curb for another. Plus, the longer I leave a disc in my Xbox, the better the chance I’ll stick with it to the end. Maybe that’s a topic for another time though…

But yeah, here. Check ’em out.

The Wingstick is one of the more crazy cool weapons in Rage. It’s basically a boomerang of death, and tossing it into a room is sure to get the chaos (and heads) a-rolling. I spend most of my time constructing these from scrap.

Yesterday, I talked a little bit about who I just got on Commander Shepard’s team, as well as earning one person’s divine loyalty. But I did get two more Achievements as I worked my way across the galaxy. See, see:

Explorer (10G): Visit 100% of the planets in an unexplored cluster

Isn’t “Explorer” one of the more common names for Achievements? I feel like I’ve seen it many times before, probably in Fallout 3 and Dragon Age: Origins.

From Marvel VS. Capcom: Fate of Two Worlds…

Nothing too exciting about these. Just making progress as I try to beat the game with everyone on Very Easy with 30-second round matches. Yeah, I’m that guy.

And that’s going to do it for this edition of  Achievements of the Week. How did y’all do over the past seven days? Any cool accomplishments you’d like to share? If so, do it below.

Achievements of the Week – The Sideways Explorer Turns the Tables Edition 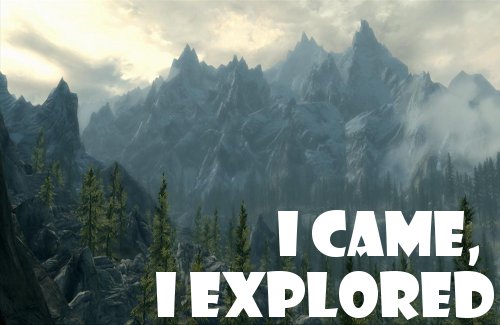 I’m too lazy to check if this is actually a first, but a goal I made on last week’s edition of Achievements of the Week was actually met. Which one? Um, keep on reading, loyal readers. I also did fairly well in some other videogames, but they don’t deserve the spotlight quite like Rhaegar does for hanging out in the Mojave Wasteland and shooting the crap out of evil automatons. Oops, guess I spoiled it.

Last week, I knew I wanted to get this Achievement, but I had no idea how close I was to the actual 10,000 threshold mark. I’d been playing for some time at that point–maybe around 25 to 30 hours–and while I wasn’t using unique Mojave Wasteland weapons all the time, I was making a conscious effort to whip out That Gun as much as possible. Guess I was right near the finish line as it was only within an hour or so of playing again that this baby popped.

Turn the Tables (10G): Land a Team Aerial Counter in a match. (Arcade/Xbox LIVE only)

No idea how I got these; I just mash those buttons like a crazy man.

Sure, these two Achievements seem like natural fits for unlocking after playing a game for over seventy-five hours. I can understand the location-based one, as I’m a homebody and creature of comfort and do not enjoy venturing out into the wild too much, content to spend time in my Whiterun house or within the secretive lair for the Thieves Guild.

The side quests one? Hmm, maybe that needs a whole blog post for explaining. Yeah, that’s it. More content spread out over this hip and happening place of mine. Stay tuned.

Just blogged about this wonderful wordy game and the three Achievements I unlocked this morning.

That’s it for this week’s edition. It seems like, with each week, Friday gets here faster than before. Go figure. And it looks like yet another busy weekend. We’ll see if I make any further progress with the almighty, all powerful, and all too important Achievements list.

For those readers out there playing Skyrim, have you hit 100 locations yet? Do you remember your 100th one? Mine was Broken Oar Grotto.

Achievements of the Week – The Be Gone All Fresh Meat Edition

Y’know, I just don’t have any witty or elaborate intro to this week’s edition of Achievements of the Week. I played a few games on the ol’ Xbox 360 when the living room wasn’t terribly frigid, like Saints Row: The Third and more Fallout: New Vegas after too long of a hiatus, but nothing popped in those titles despite my hardest efforts. So yeah, normally, I’d pick a bunch of my favorites to show off, but I only unlocked three Achievements over the last seven days and so I have to dub these as the best of the bunch for no other reason then them being all that’s there.

I already wrote about how I cheesed my way to earning these nuggets earlier this week. Mmm cheese.

Instead of using your filled up super bar thingy to unleash a flashy special attack, you can spend it completely to knock a character from your opponent’s team off the screen and out of the match for a short time. I think I did this each time by accident as MVC3 is a button-mashing game for me. Be gone, Deadpool! You are annoying!

That’s it. My one goal for this week is to earn the Curios and Relics Achievement in Fallout: New Vegas, but my problem is actually finding a unique Mojave Wasteland weapon that I like to use. Rhaegar has no points put into melee or Energy weapons. I’ve been rocking That Gun for awhile now, but have no idea if I’m even close to the 10,000 damage threshold. Wish there was a way to check, but I’ll just keep soldering on down the path of Mr. House and see if it’ll just pop on its own.

What about y’all? Any goals during the slowest month of new releases ever? Tell me about them in glorious details below in the comments.

Hey, long time, no Achievements talk! Yeah, my bad. The last iteration of Achievements of the Week was back on December 9, 2011, and I totally planned to continue doing it all through the month, but then a drunk driver hit me as I was driving home and the holidays were in full swing and my depression surfaced with extreme tenacity. But I’m back, yo. I swears it. And I have plenty to report. Again, I’m not listing all the Achievements I unlocked over the last, um, three to four weeks, but some of the ones I liked the most.

Well, to be honest, this wasn’t as amazing as I thought it might be. I stole something in public, did not resist the guards, was taken to jail, picked the lock with ease, grabbed my gear, and left the Whiterun prison without a single soul aware I was even on the loose. And that’s it.

Finished the Thieves Guild questline…sort of. Seems like to return it to its former glory, I have to do an inane number of miscellaneous quests, which involve a lot of fast traveling, which also means a lot of loading screens. It’s on my to-do list, but not a priority just yet.

Tara was able to wrap some Scotch tape around my second Xbox 360 controller’s faulty wire, and that seems to have solved the problem of it cutting in and out…for now. This has allowed us to play some co-op again.

I haven’t played too much of Rage yet, but it’s not bad. Very pretty at times, and very ugly at times in terms of textures not loading. And no, I’m not going to instal 157 gigs onto my hard drive to make the game run better. But yeah, it’s okay. I do hope to play more of it, but I gotta remember to stock up on ammo like woah. Always running out of bullets because I’m terrible at aiming. Also, John Goodman for the win.

From Saints Row: The Third…

I previously shared some Achievements earlier this week, but here’s a another I got just the other day that makes me smile. It sure makes hijacking cars fun and fast.

From Marvel Vs. Capcom 3: Fate of Two Worlds…

Need a Healing Factor (10G): Win a match without blocking. (Arcade/Xbox LIVE only)

Female Flyers (15G): Make a team composed of women who can fly, and win a match. (Arcade/Xbox LIVE only)

In total, I’ve pinged 16 out of 47 Achievements already in MVC3, and while there’s a handful of others that are attainable, the majority are not. Just like in Street Fighter IV, most of the Achievements require skill, endurance, and grinding. Not really for me, but it’s a nice edition to the collection for those times when Tara and I want to just mash buttons and have seizure-inducing images flash on screen.

Whew. Told you there would be a lot of ’em. But how about you? What cool Achievements have you pinged since last we met here? Share ’em below in the comments section, folks.