Sadly, I had to pack up the Xbox 360 and TV yesterday as my father came up to help me move from one apartment to the next. He was, however, running late, and I had about two hours to kill in a room full of boxes and nothing fun to play with (please keep your dirty thoughts to yourself). Sure, sure, I had my Nintendo DS, but that was kind of tucked away in my travel bag, and I just didn’t feel like getting off my Mac at that point. Then, ashamed, I remembered that I got five six games for my laptop back when I purchased the Humble Indie Bundle. Five main ones, and the sixth one, Samorost 2, was a bonus for those that helped contribue to the cause.

And so I scanned the list, trying to decide what to play for a bit. I dismissed World of Goo because I’m stuck on one level and can’t do anything else, as well as Aquaria, which is a game I like, but I really need to be in a mood to play. Finally, I picked Samorost 2, knowing nothing about it, only finding the name intriguing.

Samorost 2 is, obviously, a sequel, a follow-up to a game I’ve never played, but from what I can gather–that’s okay. You can go into Samorost 2 knowing nothing about it and still have a great time. The game opens up with a couple of aliens landing on a small planet, eating some fruit, and then stealing a strange little man’s dog because it was barking a little too much. The little man, referenced on another website as a space gnome, doesn’t change out of his PJs and follows their spaceship in pursuit of his best friend. And that’s the plot: rescue the dog and return home. It’s simple, but it works, and the world and creatures and mechanisms that revolve around the plot help buffer it along.

And man, what a beautiful world it is. The quality of the visuals is striking; the space gnome, his dog, and alien lifeforms are presented in a cartoonish form, but animated very well, giving off a Monty Python’s Flying Circus feel to it. The backgrounds (and foregrounds) on each level are extremely detailed and colorful, with a variety of alien flora and fauna (pun-intended) to enjoy, all done in a collage kind of way.

Gameplay is point-and-click, and the cursor turns into a hand when hovering over an item or part of the level that can be interacted with. Breaking tradition, there’s no inventory system, meaning if the space gnome picks up an item, it can–and must–be used there and then to solve the puzzle and move forward. This is a good thing in my opinion; I’ve been currently carrying around a lot of the same items in Broken Sword: The Shadows of the Templars, and each time I try to use them I fall flat on my face. Stupid elephant carving. Anyways, yeah. You point, you click, something happens. Sometimes you have to point, click, and click again while something is happening, but it’s pretty easy to figure out if you pay attention to the level and what does what. There were only two times where I got stuck. The first was because I just couldn’t find the exact pixel to click on, which was frustrating, and the second time came at Samorost 2‘s end when you have to do a bunch of things in a very specific order or start all over again. I did those final puzzles three times before I got it right.

Samorost 2 features a very odd, atmospheric soundtrack. Some levels have just tiny bits of music to it, some have none at all. It works well, but ultimately it’s forgettable. Also absent…dialogue. Progression and plot is told visually, and again, it boils down to “rescue dog and return home.” Some alien gruntage and a few doggy barks pepper the landscape, but it really doesn’t need a narrator or the space gnome’s opinionated musings. Though I still don’t understand why the alien monster is watching soccer on his TV.

Alas, Samorost 2‘s biggest fault is that it is a very short game. Even shorter than Limbo…dun dun dunnn. Consisting of seven levels, all of which are re-accessable via an age-old password system, the game’s running time is estimated between one and two hours, depending how stuck you get or how slow you pace yourself. I gobbled the game up very fast though. It’s extremely charming, stylish, and deceptively tricky. There’s an invisible rope attached to your heart, tugging you forward, and when you reach the next room, you just can’t help but click around, and before you know it, you’re in the next room. And so on, and so on. If you got some time to kill, I definitely recommend it. You can play a good portion of the game for free over at its website. Hop to it, young space gnome wannabes!

Portal is great and free, but just not for me 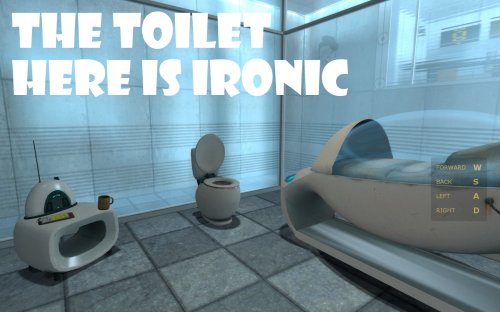 In case you’re curious, you’re supposed to read this blog post’s title in a sing-songy voice.

So, the big news is that Steam is now available for Macs, and that everyone can download a free copy of Portal (from now until May 24, that is) to celebrate this triumphant moment. Sounds like a sweet deal, right? Between the Humble Indie Bundle and this, the Internet’s been pretty kind to us gamers as of late.

I use a MacBook at home, lovingly nicknamed Macaroni, a laptop I’ve never considered gaming on save for silly little Facebook applications and, uh, Chess. Yes! The computer always wins, but whatev. That is until I got Aquaria, and that runs like a professional marathoner. So I figured what the hey, and downloaded the file to get Steam a-going. Took less than a couple of minutes to get set up with my name and profile and all that junk. Then I clicked to download my free copy of Portal. And then I waited. And waited some more. And made dinner. And took a shower. And grinded some more in Pokemon HeartGold. And checked to make sure it was still downloading. It was. I watched a little TV. And then it completed downloading…after around five hours. Hmm. That’s fine and all really, considering it’s a free game and I was downloading it a few hours after it was announced publicly.

Unfortunately, I get a message from Steam saying my video driver card thingy is not up to snuff for Portal. Bugger that. They offer me a link to download an upgrade. I click it, and nothing happens. I click it a few more times…still nothing. Finally, I just say screw it (not out loud, mind you) and run the game with what I got.

At quarter to midnight, I loaded up Portal, excited to play. That feeling faded fast when moving the mouse on the start menu felt like dragging around those boulders muscle men lift onto podiums for random peen tournaments on like ESPN. Uh-oh. Not to be confused with Ho-Oh, my kick-ass rainbow Pokemon. I thought this thing could run on Macs from the get-go. I start a new game, which opens into tutorial levels.

I only manage to get to the one room where a machine shoots a ball of fire/energy. The lag was so terrible, and I tried switching all the settings to be as least demanding as possible, but nothing worked. The sound was fine, with the robot’s audio coming in clear and crisp. Alas, controlling our leading lady was sluggish and unfriendly, and getting her through portals was like leading a cat to the bathtub. So frustrating. Such a shame.

And this is why I’m a console gamer, through and through. With a console, you have everything you need to play a game, more or less. You don’t have to upgrade video cards and alter settings to get a smoother performance. It’s just frustrating that I’d have to jump through all these hoops to even get Portal moving at a sane clip. I’m not interested enough for that. Besides, I could always pick up The Orange Box for Xbox 360 and play lag-free then. And now there’s really no point to me keeping my Steam account as I’ll forever be afraid to buy a game and then discover it won’t run well on Macaroni.

I guess if I want to play Portal, I’m going to have to stick with the Flash version for now.

Pay what you want for the Humble Indie Bundle 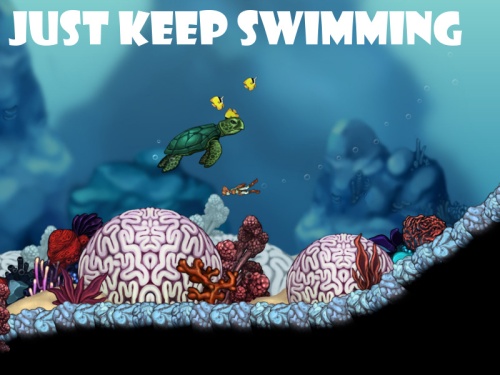 I stumbled across the Humble Indie Bundle yesterday, and I’m now here to tell you this is one helluva deal.

I’m gonna steal words from the give-awayers themselves since they can better explain what’s going on here:

The Humble Indie Bundle is a unique kind of bundle that we are trying out.

Pay what you want. If you bought these five games separately, it would cost around $80 but we’re letting you set the price!

All of the games work great on Mac, Windows, and Linux. We didn’t want to leave anyone out.

There is no middle-man. You can rest assured that 100% of your purchase goes directly to the developers and non-profits as you specify (minus credit card fees).

We don’t use DRM. When you buy these games, they are yours. Feel free to play them without an internet connection, back them up, and install them on all of your Macs and PCs freely.

Your contribution supports the amazing Child’s Play charity and Electronic Frontier Foundation. By default, the amount is split equally between the seven participants (including Child’s Play and EFF), but you can tweak the split any way you’d like.

I use a Mac laptop at home, and it’s definitely not a gaming computer (in my mind), save for some Facebook applications and…er, Chess. But they said “all of the games work great on Mac,” which immediately piqued my interest. Plus, I have a Wacom tablet for drawing, and it comes with a mouse that now finally has a purpose. So I plopped down a couple of bucks (more than a penny, less than $10.00 because I’m not made of money, kids), got an email, and immediately started downloading World of Goo, Aquaria, Gish, Lugaru, and Penumbra Overture.

Now, of these five games, I’d previously heard of two, and then of those two, I’d played one of them before on the Wii. That game being World of Goo. But the screenshots for Aquaria really stood out, and so I loaded that one up first and found myself falling in love. Hard. I can already tell that it was lovingly created, and the hand-painted scenery and aquatic life are really impressive. I mean really impressive. As are the shafts of light bursting down from cave walls. Graphics-aside, the gameplay is simple but gradually growing more complex as songs are learned and recipes are found. I’m liking it very much so far, as it’s a genuine mix of Super Metroid and Ecco the Dolphin, a mix unlike any other, a mix that is relaxing and fun, surprising and mysterious. I know this game–and many of the others in the bundle–came out some time back, and I’m a bit bummed to only be discovering it now.

I was gonna talk a bit more about Aquaria here, but this blog post has run a little long. Will save it for next time! So, yeah, the Humble Indie Bundle. Get to it before time runs out!